Overcoming the Multiple Legacies of European Colonialism: Can The West Survive Its Most Cherished Historical Myths? – Part 1 & 2 | EV & N – 324 & 325| CCTV

There are many legacies of Europe’s and America’s colonial past that are problematic and threaten the future survival of humanity. 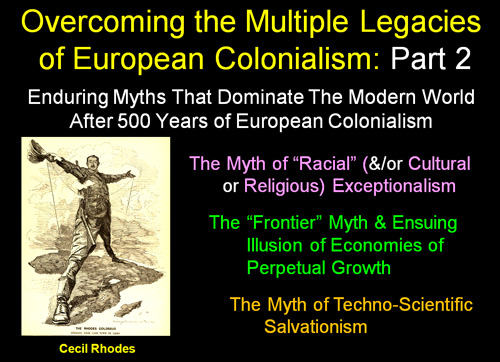 The entire human community needs quickly to overcome the three enduring myths that form the core of the legacy of European colonialism:

While they may have received their largest and most extensive expression as enduring legacies of European maritime colonialism, these myths and metaphors are now widely shared by all cultures and political entities around the world.  Both China and India are openly embracing the notion of exploring “frontiers of space,” and no nation-state in the world has renounced the core operating assumptions of perpetual-growth economics, based very precariously on the myths of techno-scientific salvationism and the “magic” of the market.

There is now an emerging global awareness that it is the technologies we have devised (from nano-plastics to nuclear waste, or the expansion of antibiotic resistance to the costly carbon trap of petro-dependent agriculture) that leave us now with the gravest existential threats to our continued existence.  Science itself is leading us to understand that a blind faith in the mythology of techno-scientific salvationism is futile and perhaps suicidal.  Moreover, there are no longer any further terrestrial frontiers.  We are all now confined to a burning planet, and fantasies about “escape” to other “frontiers of space” remain just that — fantasies.

While the humanities with their focus on literature, philosophy and the arts often deal in alternate forms of reality than that which we encounter on a daily basis, surely one of their principal achievements over the centuries has been to help humans to engage in self-reflection and learn how to distinguish between fact and fantasy.

Now, perhaps more than ever, there is a crying need for a new understanding of the humanities to help us craft credible narratives for survival on a finite, rapidly warming and increasingly chaotic and unpredictable planet.  This task will not be easy because basic ethical principles of responsible reciprocal behavior are categorically rejected by the world’s dominant powers..

We all certainly hope that the forthcoming Inaugural Rhodes  Humanities Forum can assist us for years to come in forging the new narratives of change that will be needed for our collective survival.