Hundreds of activists have staged a sit-in on the red carpet at the Venice Film Festival in protest at the huge cruise ships they say are damaging the environment.

The protest came hours ahead of Saturday’s closing ceremony, with guests due to include the Rolling Stones star Mick Jagger.

The Italian government recently announced that large cruise ships would be banned from the city’s historic centre.

San Francisco’s Board of Supervisors has voted unanimously to declare the National Rifle Association a “domestic terrorist organization” and is calling on other cities and counties around the U.S. to follow suit. The resolution was authored by Supervisor Catherine Stefani.

The Trump administration’s former top official overseeing oil and gas drilling on federal lands is joining an oil company that’s seeking to expand its operations in remote parts of northern Alaska near the Arctic National Wildlife Refuge. Joe Balash stepped down as the Interior Department’s assistant secretary for land and minerals management last Friday, and this week he confirmed he’s joining the Papua New Guinea-based company Oil Search as a senior vice president. Danielle Brian of the Project on Government Oversight told The Washington Post, “It is hard to have confidence that decisions he was making while he was working for the taxpayers were not impacted by his aspirations or hopes to go work for a company that was materially affected by his work.” 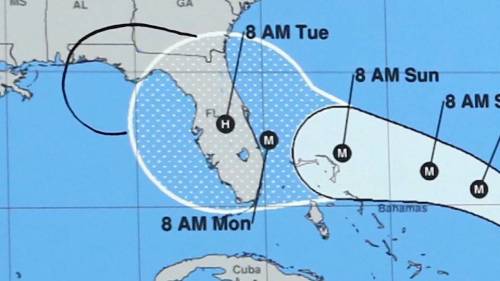 As Bahamians reel from the historic devastation of Hurricane Dorian, The Washington Post reported that President Trump personally used a black magic marker to alter a map showing the storm’s projected path, in an effort to support his false claim last weekend that Alabama might be hit by the hurricane. In fact, the National Hurricane Center never included Alabama in any of the forecast cones for Dorian. On Thursday, Trump spent a fourth straight day defending his false statements, tweeting, “I accept the Fake News apologies.”

Boris Johnson has arrived at the Queen’s summer residence of Balmoral tonight, a man with rapidly dwindling political options.
Opposition leaders have roundly rejected his call for a general election next month and the bill blocking a no-deal Brexit is now heading for royal assent. Mr Johnson declared he had “never known an opposition in the history of democracy that’s refused to have an election”, but with the European Union refusing to renegotiate the Brexit deal, parliament has now effectively boxed the Prime Minister into a corner.

‘The Family’ is the oldest Christian Conservative Organisations in Washington D.C. and very secretive. Their goal is not to use Christian feelings to help the poor and the needy, but to concentrate on the ‘key’ people such as politicians and businesspeople. Jeff Sharlet was part of the organisation and has published books on his findings. Jeff joined Thom to reveal all and whether this is a cult.

The first China-made cruise ship for polar expeditions was delivered in Jiangsu, China to its U.S. customer.