Fossil Fuel Divest Harvard invites you to a celebration of our victories, and an announcement of what’s to come, happening TOMORROW!

We’ve been encouraged this year by Harvard’s steps toward divestment – a victory made possible by everyone who showed up to rallies, signed petitions, came to our meetings, or shared our social media posts. These past two semesters have been a transformative time, and we’re finishing the year with new demands for the administration – to disentangle its climate research centers from the fossil fuel industry, and to reinvest its endowment into more sustainable, community-oriented sources. On May 3rd, we’ll be reflecting on our victory and announcing our new demands.

This is a day of celebration, and all are welcome! There will be:

So come by Memorial Church in Harvard Yard on Tuesday, May 3rd, 5pm! We’d love to see you there!

In this moment of celebration, it is worth recalling some the history of the “Divest” struggle at Harvard

The choreography was masterful.  Never was President Faust out of step with Wall Street because their dance was her dance — something which Kristine Guillaume, from the Harvard Crimson Staff made clear in The Crimson headline on 5 July 2018

Nevertheless, at Harvard the student voice was crystal clear and strident for a long time:

Tim DeChristopher – Hard truths that must be spoken about Harvard

Graduates of Harvard have made the case against the dangers of fossil fuel investments for decades.  Perhaps Harvard’s most famous living graduate, Noam Chomksy, has made his insights clear for years on the obfuscation of universities in adopting or manufacturing smoke-screens to hide the deceptions of the fossil fuel industries.  His condemnation of the tactics of the American Chamber of Commerce made this clear in 2011. 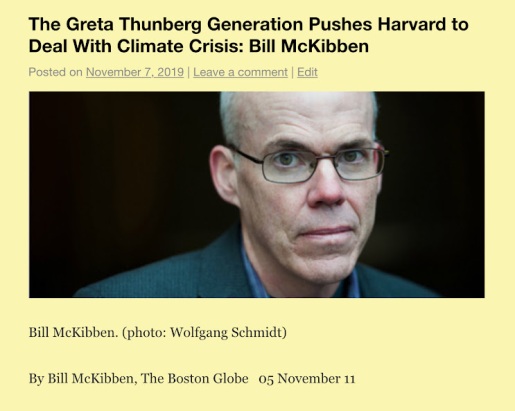 as well as the student-faculty and civil-society alliances:

and the collapse of Harvard’s leadership on the divestment issue:

Movement in the Movement: Next Steps in the “Divest Harvard” Movement 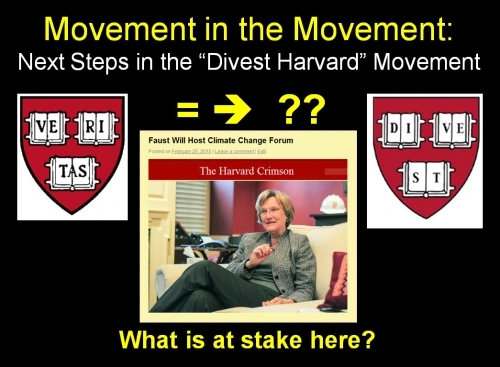 as well as the overview collection of video webcasts:

Looking forward both faculty and students must now become  attentive to the struggles on campus at Harvard and beyond that lie ahead in the fight for ecosystem integrity.  Some of these issues have been touched upon in national television broadcasts, but there is an increasingly important debate emerging internationally about the ethics of geo-engineering technology and its application to planetary-scale alterations in the climate regime.

While some Harvard alumni, prominent in the global divestment movement have spoken out clearly on this topic, there is much more room on campus for extended discussion of the the ethics of major research programs at Harvard that are currently underway in this realm.

Perhaps one of the most revealing aspects that have come to light in the course of the Harvard student Divestment Campaign — and perhaps as a warning for the forthcoming geog-engineering experiments — has been the larger context of the corporate disinformation, obfuscation and delay that has been operating very powerfully and systematically against any citizen action — like the Harvard student Divestment campaign — to raise the alarm about the imminent dangers that the use of fossil fuel entails for the survival of our civilization.

A three-part Frontline series, summarizing this larger dimension of the global struggle culminated in the 3 May broadcast on the PBS network of the series entitled:

Courses offered online from the Harvard Extension School throughout the divestment controversy included: