“…a Gift from God.” – Cowboys and “Revolutionaries” (and the problem of intergenerational ethics) | EV & N 275 | CCTV 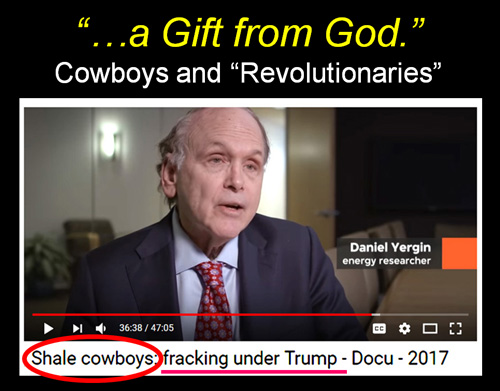 Through the Yale-68 Playlist

The case of unconventional fossil fuel extraction raises important questions of intergenerational ethics. Sustainable energy technologies — which should be adopted as soon as possible to assure coming generations of a safe and survivable future — are being stalled and stymed for the purpose of maximum profits to be amassed immediately by a few fossil fuel countries and corporations that are competing with one another to expand global fossil fuel extraction and stimulate subsequent global consumption at ever cheaper prices.

Advocates of this process suggest that it “disproves” “peak-oil” theories, but in fact this is not so.  At most it temporarily extends a “plateau” of relatively steady or slightly increasing production for a short few decades or maybe even centuries, but as with all finite resources fossil fuels are subject inevitably to a “bell shaped” pattern of extraction in the long run.

The result is that while modern industrial civilization ought to be working feverishly to wean itself from dependence on non-renewable fossil fuels, political leaders are continuing to pursue the economics of perpetual expansion and fossil fuel corporations and the countries they dominate are profiting from a momentary frenzy of consumption instead of devising a sober and rational transition strategy to move toward renewable sources of energy with the goal of sustainability and survival.