Former Secretary of State Rex Tillerson has taken a veiled shot at President Donald Trump, warning that a growing national crisis of ethics and integrity has put American democracy at risk. (May 16)

What if planet Earth could talk? – Complete Film

In this eight part film Denis Postle provides a thought provoking view on Earth and our society. Do we have a Future? What kind of Future? What could get in the way? Can we learn to think and feel like a Planet? This collection of eight videos are a loving confrontation by the Planet of all of us. View, deny, embrace, discuss and if you have proposals for resolving the Emgcy leave a comment. Initial release https://www.youtube.com/watch?v=83a4y…

Some observations on image, reality, and the distortion of institutions and truth under the Cheney-Bush administrations (…and ever since).

Several commentators expressed concern about the gap between image and reality that they witnessed in the studied swagger which was engineered as part of the “Bring ’em on” behavior during the Cheney-Bush administrations.  All activity of these administrations — foreign and domestic — appeared to be driven by what the PBS Frontline program called “Cheney’s Law”  and a predilection to resort to “The Dark Side.”   We cannot absolve ourselves of responsibility for this because these distortions and abuses and the accompanying alleged war crimes occurred “on our watch.” 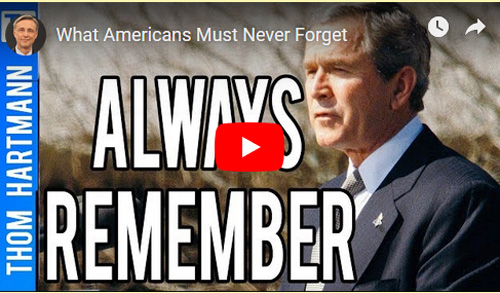 Moreover, there is mounting evidence that — despite what we say and may well earnestly believe — we have allowed our leadership (from both parties) to transform us all into a country at permanent war with the world.

President Barack Obama accepted the Nobel Peace Prize shortly after ascending to the Presidency, yet in Afghanistan he proceeded subsequently to preside over the longest war in United States history.

According to some commentators this war with the world and American public opinion began with a hijacking of American foreign policy. 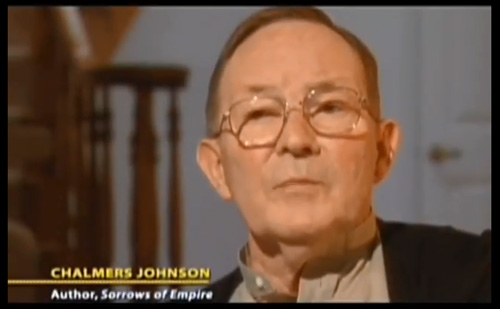 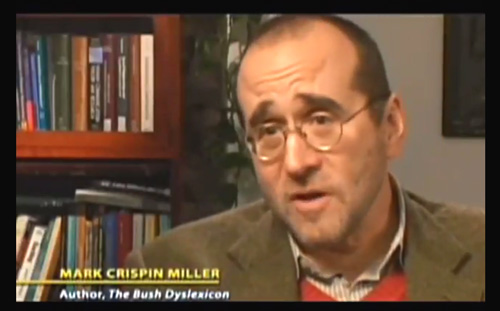 “The guy was actually a deserter in wartime…” (Mark Crispin Miller)

“He’s not qualified to speak of himself as ‘macho,’ but… [i]f he presents himself that way, they’ll buy it.  They’ll buy it because they need it.” (Norman Mailer)

“His administration is so dripping with testosterone that even to celebrate Earth Day, the guy’s got to have a weapon in his hand.”  (William Hartung) 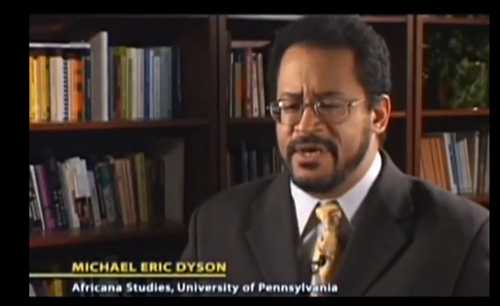 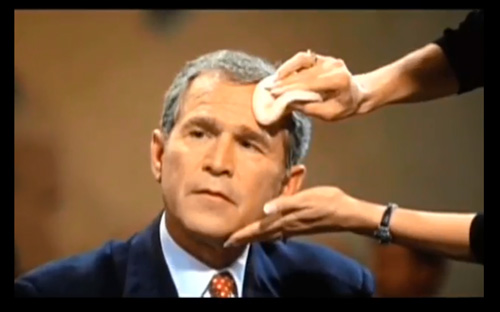 There is evidence of that an amazing transformation is possible in the hands of the right people .  A cheerleader from Andover and Yale became the “Cheerleader-in-Chief” (by now, from Texas) in the wake of the 9-11 events. 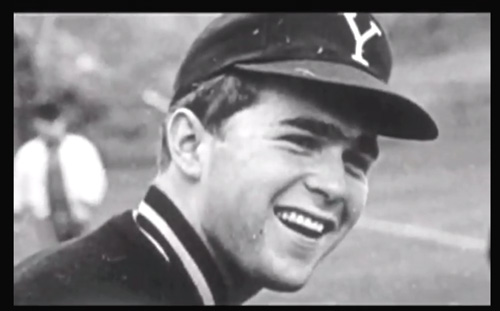 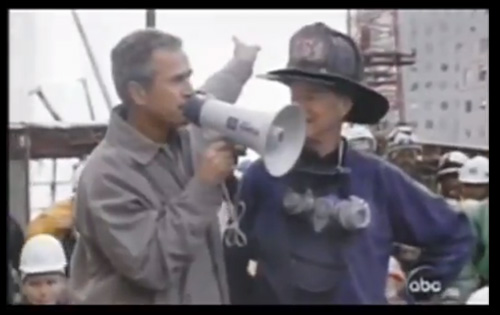 At “Ground Zero” President Bush took the bullhorn “…and basically did the one thing he has always been undeniably good at — which is cheer leading.” (Crispin Miller)

“The Bush administration may scoff at international law, but if you act with impunity at that level, it filters down through all levels of society.   If people believe that those in power can do whatever they want and — not have to pay for it — it affects all the fabric of society.”
(Jody Williams, Nobel Peace Prize Laureate, 1997)

The habit of official lying does not seem to have diminished since President George W. Bush left the White House.  Indeed, a similar sentiment was expressed by a recent Secretary of State:

Former Secretary of State — and former CEO of Exxon, Rex Tillerson — recently addressed graduating military officers, and highlighted to the dangers for the American people of becoming “…accepting of alternative realities that are no longer grounded in facts…”   As he elaborated further:

“When we as a people, a free people, go wabbly on the truth — even on what may seem the most trivial of matters — we go wabbly on America.

Prior to assuming the role of Secretary of State for his brief tenure in that office, it is now widely acknowledged that under his leadership at Exxon that corporation systematically distorted the facts of climate change, ignored its own scientists for decades and sought to influence public opinion against any restriction of greenhouse gas emissions to curb climate change.  For him to warn future military officers about the dangers of “going wabbly” on the truth, stands as a remarkable indictment — not only of the current administration but of many previous administrations as well as the entire fossil fuel sector which the administration of President George W. Bush did so much to promote and protect.

Perhaps, this has ever been so.  Perhaps Americans have always lived entangled in what one observer called “webs of endless deceit” in a “highly indoctrinated society where elementary truths are easily buried.”  It could be argued that these insights may have been the understanding of specialized scholars and the “intelligence community,” but they have not been widely shared by the public at large.  In this day and age, however, this can no longer endure.  With the advent of mass-market, feature films films like “Good Night and Good Luck,” the “The Fog of War” and “The Post” it is no longer possible to keep some “elementary truths” from the public.  If any illusions still remained in the public mind the masterful film series released by Oliver Stone for television in 2012 —  “The Untold History of the United States” — surely made this apparent to the world at large.

Nevertheless, if the pattern of the Cheney-Bush deception is not new, it can be argued that its consequences are different from whatever came before.  This is because the impact of the Bush administration’s “going wabbly” on the truth has had enduring implications for institutions throughout the world, exposing the entire human community to a radically altered climate regime that industrial civilization may well not be able to survive.

Whether or not humans choose to acknowledge them, there are boundaries, limits and thresholds in all ecosystems.  Under whatever leadership humans choose to follow with whatever rationale or myth-structure they wish to propagate or embrace, it will nonetheless be true that if in their collective behavior their societies exceed the boundaries, limits and thresholds of the ecosystems in which they are embedded, they will collapse, perhaps sooner than they can perceive, understand or prepare for in any meaningful manner.

This is what makes the Cheney-Bush story more than a matter of sad and sordid lies told by petty politicians.  It is a drama on a world stage that moves from being a farce to take on the proportions of a truly epic tragedy for the species.

Cheney and Bush did not act alone.  There was an entire cast of corporate characters as well as business reporters,  energy analysts, ingratiating interviewers and apologists who worked –perhaps even unconsciously — to promote the same fossil-fuel myths that sustained their power.  Others spent money directly to promote certain images and stifle or block alternative information about the necessary and possible transition to a post-fossil fuel world. 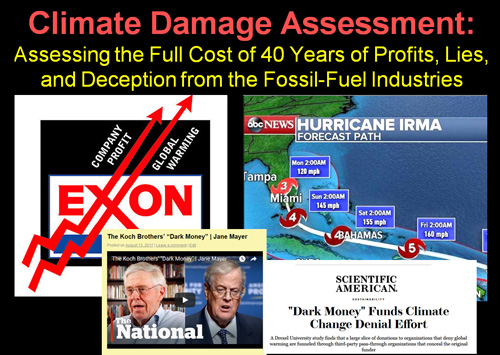 The United Nations Secretary General has underscored the existential character of the climate crisis. 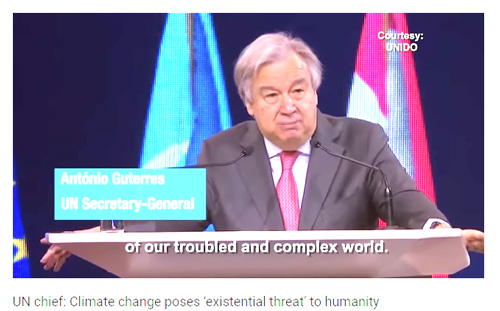 and he is not alone.  America’s leading climate scientist has warned that even if the Paris Climate Accords of 2015 were to be reached and temperatures could be kept to 2 degrees Centigrade above pre-industrial levels, this would not be sufficient to halt disastrous consequences for urban civilization that are already foreseeable. 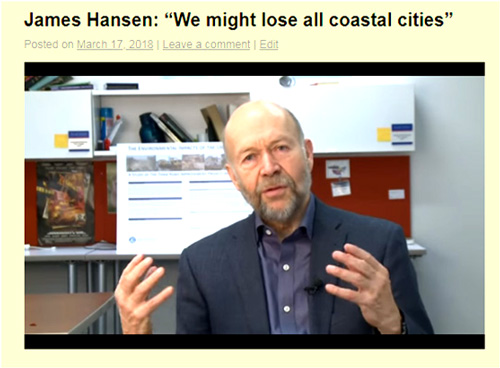 His assessments are backed by even more dire warnings from those looking at the ecosystem-wide impacts of climate change: 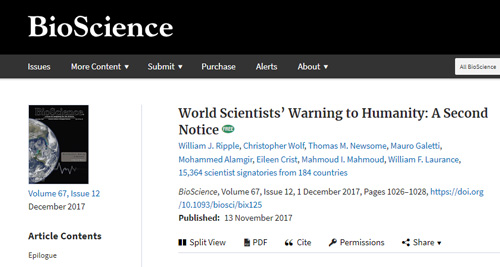 We might well ask ourselves in retrospect,  where might we be as a human community in our attempt to address the existential problem of climate change if we had not been lied to and deceived by what Shakespeare once referred to as a whole “college of wit-crackers?”

If the American people had been told the truth over the last 40 years about what the Exxon and Shell corporate scientists had been revealing to the corporate executives we may well have had a chance to slow down or reverse the tragic fate that is in store for our children and their grandchildren.

Unfortunately, this trend of official myth-making and outright lying in the highest places of government show no signs of subsiding.  In fact, it would seem that the current occupant of the White House is doing all he possibly can to unleash the maximum consumption of fossil fuels so that he and his apparent political allies can profit from the fracking and coal mining bonanza that will push carbon concentrations  in the atmosphere beyond all thresholds for ecosystemic stability.   There has never been a full cost-accounting done of the fossil-fuel moment in human history. We have ignored the “externalities” of cabon fuels since their inception.  An honest cost-benefit analysis is needed if we hope to survive.

Despite its self-indicting character, perhaps we should heed what former Secretary of State Rex Tillerson had to say to graduating military officers:

Perhaps it is time to reflect back for a moment on what we heard from our Permanent Chaplain fifteen years ago here in New Haven shortly after the reception which began the Reunion at the White House in Washington, D. C.

Because of the lies we were told at the time and have tolerated since we have opted again and again for the law of force rather than the force of law in international relations.

What options does that leave us in trying to work in a nuclear world?  It would seem that we are still confronted fifteen years later with the same moral dilemma highlighted by our Permanent Chaplain fifteen years ago.

Sir Richard Branson says he’s training to be an astronaut and will take his first trip into space soon.

He told BBC Radio 4’s You and Yours programme: “We’re talking about months away, not years away – so it’s close. There are exciting times ahead.

“I’m going for astronaut training; I’m going for fitness training, centrifuge and other training, so that my body will hopefully cope well when I go to space.”

The 67-year-old multi-millionaire has been investing in commercial space travel since 2004, when he founded space tourism company Virgin Galactic.