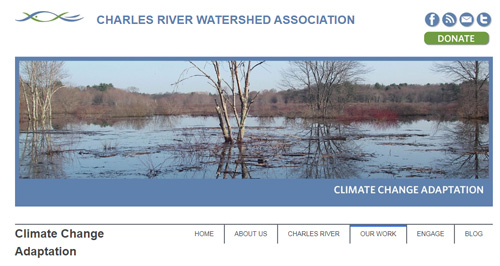 CRWA is laying the groundwork for a system-wide approach to climate change preparedness, working to support current systems so they may cope with and rebound from major storm events.

We are already experiencing the impacts of climate change on the Charles River and surrounding communities–impacts that are predicted to increase as we approach mid-century. A 2012 study by the Frontier Group and Environment America, “When it Rains it Pours,” concluded large precipitation events happening once every 12 months are now happening every nine months. New England has experienced the greatest change, with intense rainstorms and snowstorms now happening 85 percent more often than in 1948.

These more frequent, violent storms, like hurricanes and new kinds of nor’easters, will cause catastrophic flooding, combined sewer and sanitary sewer overflows, water pollution, and extended drought and heat. Ecosystem impacts will be inevitable.

Although the Massachusetts Climate Change Adaptation Report was released in 2011, no implementation plan exists today and vulnerable infrastructure in the Charles River has not been assessed in the context of risk management. While studies have been done on sea level rise in the Boston metropolitan area, a study of the combined effects of sea level rise and Charles River flood flows resulting from extreme storm events has not been performed. 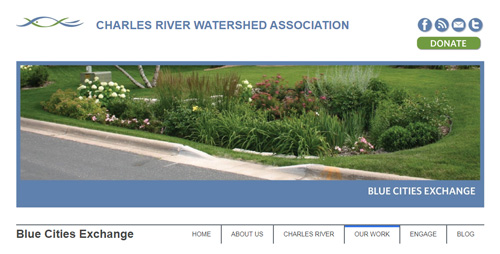 “The best use of Widett Circle? Don’t develop it at all,” By Bob Zimmerman and Elizabeth Henry, Boston Globe, January 4, 2018

“The best use of Widett Circle? Don’t develop it at all,” By Bob Zimmerman and Elizabeth Henry, Boston Globe, January 4, 2018.

DW Documentary
Published on Jul 5, 2017
Exploding real estate prices, zero interest rate and a rising stock market – the rich are getting richer. What danger lies in wait for average citizens?

For years, the world’s central banks have been pursuing a policy of cheap money. The first and foremost is the ECB (European Central Bank), which buys bad stocks and bonds to save banks, tries to fuel economic growth and props up states that are in debt. But what relieves state budgets to the tune of hundreds of billions annoys savers: interest rates are close to zero.

The fiscal policies of the central banks are causing an uncontrolled global deluge of money. Experts are warning of new bubbles. In real estate, for example: it’s not just in German cities that prices are shooting up. In London, a one-bed apartment can easily cost more than a million Euro. More and more money is moving away from the real economy and into the speculative field. Highly complex financial bets are taking place in the global casino – gambling without checks and balances. The winners are set from the start: in Germany and around the world, the rich just get richer. Professor Max Otte says: “This flood of money has caused a dangerous redistribution. Those who have, get more.” But with low interest rates, any money in savings accounts just melts away. Those with debts can be happy. But big companies that want to swallow up others are also happy: they can borrow cheap money for their acquisitions. Coupled with the liberalization of the financial markets, money deals have become detached from the real economy. But it’s not just the banks that need a constant source of new, cheap money today. So do states. They need it to keep a grip on their mountains of debt. It’s a kind of snowball system. What happens to our money? Is a new crisis looming? The film ‘The Money Deluge’ casts a new and surprising light on our money in these times of zero interest rates.

Published on Dec 22, 2016
Jan has always been fascinated by snow and ice.

As a glaciologist he studies the changes of the ice sheets of Antarctica and Greenland, mostly using computer models, but also collecting observations on site.

His goal? Research how these changes impact our global climate.

In this confronting talk, Jan explores how climate change may impact many facets of our modern city life.

Jan Lenaerts (1985) became fascinated by weather from a young age onwards. As soon as he finished his high school education, he went to The Netherlands where he studied Meteorology at Wageningen University (MSc in 2008).

He decided to pursue his doctoral dissertation at Utrecht University. There he studied the process of snow transport over the vast ice sheets of Antarctica and Greenland, mostly using computer models, but also collecting observations on site.

When he defended his PhD thesis in 2013, he had already experienced the amazing nature of Greenland, Alaska and Svalbard. More recently, Jan has steered his research towards understanding present-day rapid changes on the ice sheets, and their impact on global climate.

In 2014, he received the prestigious InBev-Baillet Latour Antarctic Fellowship.

Jan will move to Boulder (USA) in 2017 to become assistant professor at the University of Colorado.

Eric Klinenberg: Climate Change and the Future of Cities (October 2016)

Published on Dec 12, 2016
What can sociology contribute to the study of climate change? What can it add to the roiling debates about how to mitigate, adapt, and transform the places we settle in the face of an existential threat to the future of our species, and many others as well? In this talk, Eric Klinenberg draws on his own research as well as his experience serving as Research Director of the federal government’s Rebuild By Design competition for rebuilding after Hurricane Sandy. He’ll examine a number of urgent questions: How can cities can help reduce greenhouse gas emissions and create more sustainable forms of collective life? How can they protect vulnerable people and places from the outbursts of extreme weather that are becoming ever more likely to arrive? And can they adapt to global warming without making the world even more unequal?

Eric Klinenberg is a member of the Berkeley Sociology diaspora, and he’s spending this year close to the motherland, as a fellow at Stanford’s Center for Advanced Study in the Behavioral Sciences. Klinenberg is Professor of Sociology and Director of the Institute for Public Knowledge at New York University, as well as research director of the federal government’s Rebuild by Design competition. His books include Going Solo: The Extraordinary Rise and Surprising Appeal of Living Alone (Penguin, 2013), Fighting for Air (Holt, 2008), Heat Wave: A Social Autopsy of Disaster in Chicago (Chicago, 2nd ed., 2015), and, with Aziz Ansari, of Modern Romance (Penguin, 2015). In 2016, he edited a special issue of Public Culture on Climate Change and the Future of Cities (Duke, 2016). In addition to his scholarly work, Klinenberg contributes regularly to a number of journalistic outlets, including The New Yorker, The New York Times Magazine, and the radio program This American Life. http://sociology.berkeley.edu/eric-kl…