Summer 2018 Temperature Outlook: Hotter Than Average Across the West, Near or Cooler Than Average in Parts of Southeast, Midwest | The Weather Channel 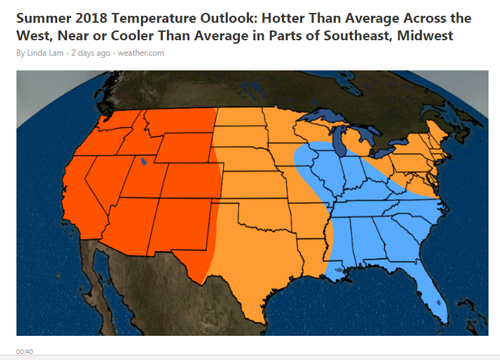 Above-average temperatures are expected to continue to grip the West this summer, while parts of the Southeast and Midwest may see near to slightly cooler-than-average conditions, according to the latest outlook from The Weather Company, an IBM Business.

Elsewhere, areas from the Plains into the Great Lakes and Northeast may see near to slightly above-average during temperatures June through August.

John Bolton says the USA is invading Iran in 2018

Some extraordinary phenomena have taken place in recent times; Hurricane Katrina, the heat wave of 2003, polar bears swimming in search of ice and vast swarms of insects enveloping an African village. But are these isolated incidents or are they omens of a greater global change?

Sir David discovers that the world is warming at an unprecedented rate, and finds out why this is now far beyond any normal allowance for cyclical fluctuation. But are humans to blame? These changes are already in motion whatever we do now, but Sir David believes that we may be able to act to prevent a catastrophe. People around the world are having to adapt their way of life as the climate changes; the Inuit in the Arctic whose hunting is now limited, the Pacific island inhabitants forced to move as their homes disappear beneath the waves, and the Siberian homes slowly sinking into the permafrost. Sir David investigates some of the possible scenarios for the future, including rising sea-levels, insect plagues and an increase in diseases.

Data in this video comes from Global Insight’s report to the United States Conference of Mayors and The Council on Metro Economies and the New American City. According to the report, economic growth in US metropolitan areas in the coming decades will test their infrastructures. Employment and population are two major drivers for congestion-related costs.

Over the next decade, the 15 metros with the largest increases in employment will be adding at least a quarter of a million jobs each. The strain on current transportation infrastructure cannot be understated as 12 of these 15 metros already rank among the 15 highest in congestion per commuter.

In addition to employment growth, which will put further strain on rush hour commutes, general population gains will also contribute to congestion. Population growth will be highest in the South, including Dallas, Houston, Atlanta, and Miami – four of the top five largest population gainers through 2020.

Over the longer-term, the picture is not any better. Total metro area population will grow by 32% from 2012-2042 and will be especially fast in some of the nation’s largest metros. Population will advance by over 50% in Dallas, Houston, Atlanta, Tampa, Denver, San Antonio, and by over 80% in Phoenix, Riverside, and Orlando. Houston and Dallas already rank among the most congested metros; if there is not significant investment in infrastructure congestion costs will be astronomical and will stifle long-term economic potential.

Part I: High-Res Images of Cities at Night (from ISS)

City lights broadcast our existence into the night of space. Imagine how the Earth will look to astronauts in a century’s time or longer? These images are incredibly difficult to take from a spacecraft traveling along at almost 28,000 kilometers per hour. The images are held at NASA’s Johnson Space Center in a special archive for astronaut photography. Watch for the great cities of Beijing, Istanbul, Melbourne, Montreal, London, San Francisco, Los Angeles, Las Vegas, Buenos Aires, Brasilia (one of our favorites), and more.

The View from Space – Earth’s Countries and Coastlines

These high-res time-lapse sequences captured by astronauts aboard the International Space Station give us a beautiful and clear view of some well-known coastlines and countries around the world. Get a good look at England, France, Italy, Egypt, Algeria, Tunisia, Greece, the island of Crete, Taiwan, South Korea, Japan, the United States, Mexico, Ecuador, Peru, Chile, Argentina, Cuba, and more. We’ve attempted to show as many countries as we would, but inevitably we’ve left many out. Please write to the the astronaut photography office at NASA’s Johnson Space Center to request inclusion in this amazing series of sequences.

The remaining climate change uncertainties point toward higher risks and greater urgency for action
President-elect Donald Trump’s nominee for Secretary of State – and until recently the CEO of ExxonMobil – Rex Tillerson was given a confirmation hearing by the Senate Foreign Relations Committee last week. In his testimony, Tillerson accepted the reality of human-caused global warming and that “The risk of climate change does exist and the consequences of it could be serious enough that action should be taken.”
While he accepted the problem exists, Tillerson nevertheless proceeded to downplay its risks, saying:

The increase in the greenhouse gas concentrations in the atmosphere are having an effect, our ability to predict that effect is very limited.

Many climate scientists took issue with that statement, and for good reason. Climate models have been very accurate in their projections about many consequences of human carbon pollution. It’s true that there’s uncertainty in just how quickly some of those consequences will be triggered. The bad news is that recent studies have shown that many of those consequences are happening more quickly than climate scientists anticipated. Greater climate uncertainty translates into more urgency to tackle the problem, not less.

In 1997, the oceanographer Wallace Broecker, of Columbia University in New York, suggested that if the Gulf stream turned off, winter temperatures in the British Isles could fall by an average of 11°C – plunging Blackpool or Berwick to the same temperatures as Spitsbergen, inside the Arctic circle. Any dramatic drop in temperature could have devastating implications for agriculture – and for Europe’s ability to feed itself.

Just how quickly such a shutdown could happen has been a subject of debate and research among climate scientists. A study published in Science Advances in early January corrected for a bias recently identified in climate models that acted to keep the AMOC and Gulf Stream more stable than it appears to be in reality:

Freshwater continually flows into the northern Atlantic through precipitation, rivers and ice-melting. But supply of salty waters from the south, through the Gulf Stream System, balances this. If however the current slows, there is less salt supply, and the surface ocean gets less salty. This fresher water is lighter than saltier water and therefore cannot sink into the depths so easily. Since this sinking – the so-called deep water formation – drives the Gulf Stream System, the current continues to weaken. There is a critical point when this becomes an unstoppable vicious circle. This is one of the classic tipping points in the climate system.

In most climate models, the AMOC imports fresh water, which would make the circulation more stable. According to recent observational data, the AMOC is actually exporting fresh water. The authors of the study corrected for this bias, and ran the models in a scenario of an abrupt doubling of atmospheric carbon dioxide levels from about 350 to 700 ppm.

This is a more extreme scenario than a more gradual ramping up of carbon levels, but importantly, the study did not account for meltwater flowing into the Atlantic from the melting Greenland ice sheet. Recent research has shown that Greenland meltwater may significantly weaken the AMOC in the coming decades.

Under the study’s scenario, the AMOC lost a third of its strength after 100 years, and broke down within about 300 years. As a result, average winter temperatures over parts of northern and western Europe would become 7°C colder than today.

According to the guardian.