U.S. Birth Rate Drops To Lowest In Decades | On Point 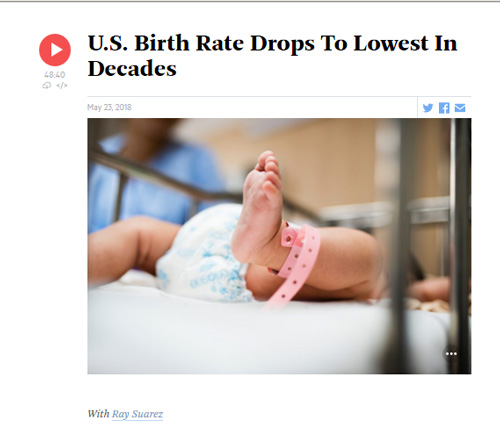 Stephanie Coontz, professor of history and family studies at The Evergreen State College. Author of “Marriage, a History: How Love Conquered Marriage” (2005). (@StephanieCoontz)

Emilio Parrado, professor of sociology at the University of Pennsylvania who studies the U.S. Hispanic population, international migration, and demographics.

On the drop and the economy:

This really all started with the 2008 recession. There was essentially a fertility crash after that. What we know from the research is when the economy gets bad, people put off having babies. But since then, the demographers I’ve spoken to estimate that there are 4.8 million fewer babies that have been born as a result of this fertility rate.

“Even though the economy is quite a bit better than it was 10 years ago, you still have these lasting economic scars. For a lot of these people, it’s millennials who have put off having children.”

Even though the economy is quite a bit better than it was 10 years ago, you still have these lasting economic scars. For a lot of these people, it’s millennials who have put off having children. They are still digging themselves out of student loan debt, it’s become harder to buy a house, they look at the cost of childcare which is increasing beyond the rate of inflation. And they may have a good job and a good income now, but they haven’t dug themselves out of that hole that they found themselves in after the recession. 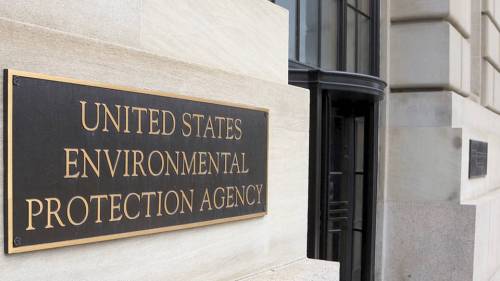 Back in the United States, officials with the Environmental Protection Agency barred multiple journalists from covering a summit on water contamination at the EPA’s D.C. headquarters Tuesday, with one journalist reporting she was shoved out of the building by security guards. The reporters were from CNN, the Associated Press and E&E News. The journalist who was shoved, Ellen Knickmeyer of AP, was ultimately allowed into the meeting. The meeting was about nationwide water contamination from the chemicals PFOA and PFOS, which are used in Teflon and firefighting foam. The attempt to exclude some journalists from Tuesday’s hearing comes as EPA Administrator Scott Pruitt, who spoke at Tuesday’s meeting, is facing an escalating scandal about how his agency and the White House have suppressed the publication of a federal health study about the dangers of these chemicals, after a White House aide warned its publication would cause a “public relations nightmare.” Click here to see our full coverage of the chemicals PFOA and PFOS. 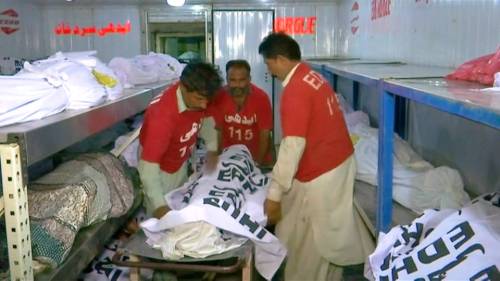 In Pakistan, a severe heat wave in the city of Karachi has killed at least 65 people, as temperatures have topped 104 degrees Fahrenheit. The deaths were reported by the organization that runs the city’s central morgue, although city officials have not yet confirmed the death toll. Scientists say that soaring temperatures linked to climate change could make parts of South Asia too hot for human survival by 2100.

Communities and innovators all over the world are creating new sustainable food sources that are resilient to climate change and growing populations. In Madagascar, we see how villagers are closing off marine areas to allow the fish supply to replenish at a natural pace. In San Diego, California, aquaculturists are exploring open ocean farming as a more sustainable model for the fishing industry.

US Military: We’re Running Out of Bombs

Posted on May 23, 2018 | Leave a comment
RT America      Published on May 23, 2018
A new report has found the United States could be running low on bombs. Military officials are concerned they may not be able to replenish the supply. RT America’s Anya Parampil explains.

David Morey talks about the strained relations between China and the U.S.