You wouldn’t love it if you knew what it was made from.
Tell Doritos and PepsiCo to adopt a responsible palm oil policy, and save our rainforests: http://smarturl.it/Doritos

This deforestation results in the death of over 1,000 Sumatran orangutans every year. This is the ad that Doritos don’t want you to see in ‘Doritos Crash The Superbowl 2015.’

Sum of Us is a world-wide movement focused on creating a better global economy. We want governments to answer to people, not corporations. Our focus is on ethical consumerism, from the sourcing of products to the rights of workers to fair treatment. We’re building a world that puts the needs of people and the environment above short-sighted greed for the good of all of us and our world.

We’re using people power, people like you, to expose the one weakness of the corporations ruining our planet: they need us to buy their products. We’ve got the advantage. We are SumofUs.org and we’re not going to take this anymore. 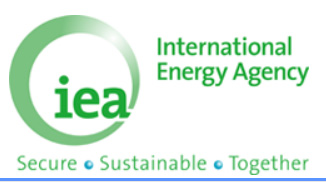 Data from the International Energy Agency (IEA) indicate that global emissions of carbon dioxide from the energy sector stalled in 2014, marking the first time in 40 years in which there was a halt or reduction in emissions of the greenhouse gas that was not tied to an economic downturn.

“This gives me even more hope that humankind will be able to work together to combat climate change, the most important threat facing us today,” said IEA Chief Economist Fatih Birol, recently named to take over from Maria van der Hoeven as the next IEA Executive Director.

Global emissions of carbon dioxide stood at 32.3 billion tonnes in 2014, unchanged from the preceding year. The preliminary IEA data suggest that efforts to mitigate climate change may be having a more pronounced effect on emissions than had previously been thought.

The ability of the Amazon forest to soak up excess carbon dioxide is weakening over time, researchers reported last week. That finding suggests that limiting climate change could be more difficult than expected.

For decades, Earth’s forests and seas have been soaking up roughly half of the carbon pollution that people are pumping into the atmosphere. That has limited the planetary warming that would otherwise result from those emissions.

The forests and oceans have largely kept up even as emissions have skyrocketed. That surprised many scientists, but also prompted warnings that such a robust “carbon sink” could not be counted on to last forever.

The severity of damaging human-induced climate change depends not only on the magnitude of the change but also on the potential for irreversibility. This paper shows that the climate change that takes place due to increases in carbon dioxide concentration is largely irreversible for 1,000 years after emissions stop. Following cessation of emissions, removal of atmospheric carbon dioxide decreases radiative forcing, but is largely compensated by slower loss of heat to the ocean, so that atmospheric temperatures do not drop significantly for at least 1,000 years.

Among illustrative irreversible impacts that should be expected if atmospheric carbon dioxide concentrations increase from current levels near 385 parts per million by volume (ppmv) to a peak of 450–600 ppmv over the coming century are irreversible dry-season rainfall reductions in several regions comparable to those of the “dust bowl” era and inexorable sea level rise.

Thermal expansion of the warming ocean provides a conservative lower limit to irreversible global average sea level rise of at least 0.4–1.0 m if 21st century CO2 concentrations exceed 600 ppmv and 0.6–1.9 m for peak CO2 concentrations exceeding ≈1,000 ppmv. Additional contributions from glaciers and ice sheet contributions to future sea level rise are uncertain but may equal or exceed several meters over the next millennium or longer.

Some days lately – many days, actually – it can seem like the United States, or at least Washington, is paralyzed and the world is passing us by. On issue after issue, America looks gridlocked while the future calls out for action and change. The US ought to be incredibly well-positioned for that future. But given our dysfunction, are we? Two big thinkers with us today on exactly that issue. Harvard’s Joseph Nye and the New Yorker’s John Cassidy – who recently wrote that the biggest threat to America’s future is America. This hour On Point: challenges, gridlock, and the future of the USA.

Coal And American Energy Futures | On Point with Tom Ashbrook

Coal seems like our most primitive fuel. We dig it out of the ground in chunks. It burns dirty. It feels like Dickens and the Victorian era. The Industrial Revolution. But we still burn a lot of it. In power plants. Now there is a push on to make coal at least pay its way in terms of its heavy costs to human health and to the environment. And there’s a push back that claims a “war on coal.” This week, the Supreme Court looks at what the EPA can require. Congress is jumping into the coal bin. And the coal keeps coming. This hour On Point: climate change, clean-up, and coal. 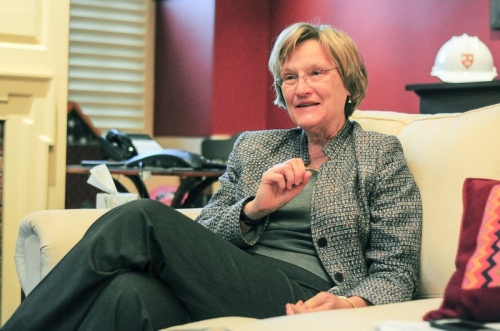 University President Drew G. Faust will convene a panel about climate change on April 13, following several requests on behalf of a faculty group calling for an open forum about Harvard’s investment in fossil fuel companies.

The panel will be moderated by talk show host and journalist Charlie Rose, who has interviewed Faust on television in the past. The roster of panelists is scheduled to include Harvard science and public policy professors as well as experts from outside the University.

Faust’s announcement comes after several efforts on behalf of Harvard Faculty for Divestment—a group of 238 faculty from across the University who have signed an open letter urging Faust to withdraw its investments in fossil fuel companies— to schedule an open forum to discuss the University’s stance on divestment. In the past year, members of the Harvard Faculty for Divestment have repeatedly asked for an “open forum in which members of the Corporation, students, faculty, and alumni speak.”

Student activist group Divest Harvard—founded in 2012—has also repeatedly asked for an open meeting with Faust to discuss the issue.

The climate panel is scheduled to fall on the first day of a week-long sit in organized by Divest Harvard and University alumni called “Harvard Heat Week,” in which protestors will demand that the University divest from the fossil fuel industry. History of Science professor Naomi Oreskes, a member of Harvard Faculty for Divestment, is scheduled to speak on the panel.

Harvard Faculty for Divestment, for its part, has scheduled what they call a “Faculty Forum on Divestment” for April 17, the same week as Faust’s forum, according to the group’s website.

James G. Anderson, a member of Harvard Faculty for Divestment, praised Faust’s efforts to create what he called a “spectacular” panel.

However, Anderson said he still would like to see a forum focused specifically on the University’s stance on divestment.

Information concerning institutional divestment movements — like the Divest Harvard movement, organized by students —  is available at Divest-Invest.Net  Further background material on the divestment controversy at Harvard is available through selected episodes of the Cambridge Community Television series, Be-Live:

25 March 2015
The World Health Organization (WHO) concluded that glyphosate, the herbicide in Monsanto’s Roundup weed-killer, is probably carcinogenic to humans.

This is a guest article by Timothy A. Wise, researcher at Tufts University’s Global Development and Environment Institute.

The World Health Organization (WHO) apparently has not gotten the memo about the supposed consensus on GMOs being safe. On March 20, 2015 the WHO’s International Agency for Research on Cancer (IARC) released a new analysis of the evidence on five organophosphate pesticides, including glyphosate, the herbicide in Monsanto’s Roundup weed-killer. The international scientific body concluded that glyphosate is “probably carcinogenic to humans.”

The WHO analysis puts the lie to the supposed “scientific consensus” on the safety of GM crops, declared but not proven by National Geographic, the Gates Foundation, and the Cornell Center for Science, among others. (See my previous article, “The War on Genetically-Modified-Food Critics.”)

The WHO findings, summarized in an accessible two-page monograph and in The Lancet Oncology, raise alarms. Glyphosate is by far the most widely used herbicide because it is the weed-killer that genetically modified corn and soybeans are engineered to “tolerate.” With GM varieties now accounting for 90 percent or more of the U.S. market for corn and soybeans, glyphosate is being liberally sprayed over ever-more-vast tracts of farmland with farmers secure in the knowledge that their crops won’t be harmed by the herbicide.

This article was co-written by Dan Zegart, author of Civil Warriors, the legal siege on the tobacco industry.

But it turns out that there is much more to this story than just climate change, and we find ourselves once again reaching back into the rich history of scientists paid by tobacco companies to conduct research bringing into question the links between cigarette smoke and cancer.

The October 2014 email discussion, led by infamous climate denier Fred Singer, asks whether it would make sense to file a lawsuit to try and stop the release of the new feature length documentary, Merchants of Doubt – a film tracing the tactics used by Big Tobacco to spread misinformation and how those same tactics are now being used by those attacking climate change science and the 97% consensus.

As an expert-for-hire who has taken money from both Big Tobacco and fossil fuel companies over the span of his career, S. Fred Singer is a major focal point in Merchants of Doubt.

But where the really interesting story lies, is in two of the recipients of the Singer email who share an uncannily similar history.

One recipient is Willie Soon, a name familiar to loyal DeSmog readers who have no doubt seen stories on the Willie Soon Harvard-Smithsonian scandal over the past few weeks. Dr. Soon, has been making headlines for his funding from utility (coal) and oil companies, in exchange for publishing peer reviewed scientific papers that question the role of carbon dioxide pollution in warming the planet.

Earlier this month, it was revealed that Florida’s Republican governor Rick Scott had directed the Florida Department of Environmental Protection (DEP) to stop using terms like “climate change” and “global warming” in any official correspondence or during meetings. According to Public Employees for Environmental Responsibility (PEER), that gag order has now claimed its first victim.

PEER made the following assertions in a press release today:

Barton Bibler is a long-time DEP employee who now serves as Land Management Plan Coordinator in its Division of State Lands. He attended a Florida Coastal Managers Forum on February 27, 2015 at which climate change and sea-level rise were discussed among a mix of public attendees. Mr. Bibler’s official notes on this meeting reflected all of that discussion. He was directed to remove any hot button issues, especially explicit references to climate change, and then was given a letter of reprimand for supposedly misrepresenting that the “official meeting agenda included climate change.”

As he was given the reprimand on March 9th, Mr. Bibler was told to not return to work for two days which would be charged against his personal leave time. Two days later he received a “Medical Release Form” requiring that his doctor supply the DEP with an evaluation of unspecified “medical condition and behavior” issues before being allowed to return to work.