American kids today spend only four to seven minutes a day playing outdoors. We hear a new call to raise the “wild child.” 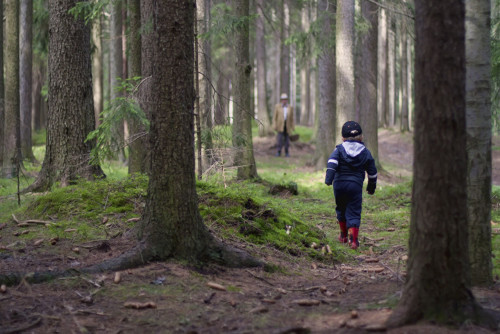 A child walks through a forest landscape. (Rudolf Vlček / Flickr)

In the space of a generation, American children have been largely pulled out of nature. By one study, the average American boy or girl now spends, on average, just four to seven minutes a day outdoors. There are all kinds of reasons, but at heart it’s a lifestyle change. More screens, more protectiveness, more scheduled lives. American kids under what some call “house arrest.’ My guest today says that childhood divorce from nature is costing us, our children, dearly in physical and mental health and more. This hour On Point: getting the kids back to nature. Raising the “wild child.”

Lobbyist claims Monsanto weed killer is safe to drink, then bolts when TV host offers him a glass

A controversial lobbyist who claimed that the chemical in Monsanto’s Roundup weed killer was safe for humans refused to drink his own words when a French television journalist offered him a glass.

In a preview of an upcoming documentary on French TV, Dr. Patrick Moore tells a Canal+ interviewer that glyphosate, the active ingredient in Roundup herbicide, was not increasing the rate of cancer in Argentina.

“You can drink a whole quart of it and it won’t hurt you,” Moore insists.

“You want to drink some?” the interviewer asks. “We have some here.”

“I’d be happy to, actually,” Moore replies, adding, “Not really. But I know it wouldn’t hurt me.”

“If you say so, I have some,” the interviewer presses.

“So, it’s dangerous?” the interviewer concludes.

But Moore claims that Roundup is so safe that “people try to commit suicide” by drinking it, and they “fail regularly.”

“So, are you ready to drink one glass?” the interviewer continues to press.

“No, I’m not an idiot,” Moore says defiantly. “Interview me about golden rice, that’s what I’m talking about.”

At that point, Moore declares that the “interview is finished.”

“That’s a good way to solve things,” the interviewer quips.

“Jerk!” Moore grumbles as he storms off the set. The summit comes a week after Paris was declared the most polluted city on the planet after a choking cloud almost obscured its most symbolic monuments including the Eiffel Tower. Photograph: Witt/Sipa/Rex

Leaders and representatives of 30 European cities will gather in Paris on Thursday to declare their commitment to “clean” policies to fight climate change.

Officials will also sign a declaration agreeing to use their collective purchasing power – estimated at around €10bn (£7.4bn) a year – to buy eco-friendly.

The gathering comes eight months before Paris hosts the United Nations climate change conference, known as COP21, aimed at achieving a binding, universal and international agreement on climate for the first time in more than 20 years of UN negotiations.

In a joint statement signed by 26 European mayors, including London’s Boris Johnson, city representatives said they hoped combining forces to favour green and low-carbon industries for procurement contracts would have a “leverage effect on the private sector that very often aligns its own requirements with the public sector”.

“[The] time has now come for European capitals and metropolises to pool our efforts to tackle climate change. This requires a closer dialogue between cities through a more regular exchange of expertise and good practices,” they declared.

The mayors will arrive at Paris’ city hall in electric Autolib’ cars, from the city’s car-sharing service, decorated in the colours of their country.

The summit comes a week after Paris was declared the most polluted city on the planet after a choking cloud almost obscured its most symbolic monuments including the Eiffel Tower and left the city of light looking more like the capital of smog.

We, at Campus Climate Corps, believe in the urgency of the challenges represented by Climate Change. We believe that forming alliances among like-minded young professionals is essential if we are to overcome the inertia and complacency that threaten the environment of the world we know today and the long-term viability of the world that future generations will inherit. We, Campus Climate Corps, are students and citizens concerned about our future and we ask you to join with us in this mission.

The climate’s long and terrible downward spiral of change has already begun. Science clearly supports this assessment. It is undeniable that the longer we wait the more difficult and less productive our mitigation efforts will become. As one of the two biggest polluting nations, people of the USA must join Europe’s leadership toward more visionary environmental policies and social transformations. Exposing America’s future technical and political leaders, its university students, to the attitudes and perspectives of their counterparts in Europe can help move American public opinion and governance policies. This is a primary objective of the CCC Symposium.

The CCC Symposium will precede the COP21 in Paris, Nov/Dec 2015. The symposium will focus on climate change topics and will include keynote addresses, paper presentations, and poster sessions by students, all designed to educate young professionals and empower them to leadership and action.

Ted Cruz Compares Himself to Galileo, Calls Those Who Believe in Climate Chang e ‘Flat-Earthers’

Ted Cruz compared himself to the 17th Century scientist Galileo Galilei when it comes to his position on climate change. A climate denier, did Cruz really use Galileo and the “flat-Earth” as justification for his anti-climate position?

A few days after accusing “global warming alarmists” like California Governor Jerry Brown (D) of ridiculing and insulting “anyone who actually looks at the real data” around climate change, newly-declared presidential candidate Ted Cruz (R-TX) upped his rhetoric against those who care about the issue.

Speaking to the Texas Tribune on Tuesday, Cruz said that contemporary “global warming alarmists are the equivalent of the flat-Earthers.”

“You know it used to be it is accepted scientific wisdom the Earth is flat, and this heretic named Galileo was branded a denier,” he said.

In Cruz’s opinion, when it comes to climate change, his denier position places him alongside 17th Century scientist Galileo Galilei, who was also considered to be denying the mainstream knowledge of his day. According to Cruz’s logic, he is taking the minority view that human-caused climate change is not happening, just as Galileo took the minority view that the scientific method should be trusted over the Catholic Church.

Galileo, who helped perpetuate the notion that the Earth rotates around the sun, was eventually excommunicated from the Church for his views. In the centuries since he has come to be known as the “father of modern physics” and “the father of modern science.”

Hundreds of environmental activists walked out of the U.N. climate change summit in Warsaw, Poland, today over the absence of a binding agreement on curbing global warming. The move comes less than 36 hours after a group of 133 developing nations walked out of a key negotiating meeting amidst a conflict over how countries who have historically emitted the most greenhouse gases should be held financially responsible for some of the damage caused by extreme weather. “Our message to our political leaders is that nature does not negotiate,” says Greenpeace Executive Director Kumi Naidoo. “You can’t change the science — we have to change political will.”

After more than two months in detention, five members of the Arctic 30 are now free on bail in Russia. The group of 28 activists and two journalists were detained following an attempt to board Russia’s first offshore oil rig. Amy Goodman discusses the case with Greenpeace Executive Director Kumi Naidoo.

During a press conference, Democracy Now!’s Amy Goodman questioned U.N. Secretary-General Ban Ki-moon about whether he would consider banning fossil fuel industry lobbyists from U.N. climate meetings in the same way the World Health Organization has banned tobacco lobbyists from meetings on tobacco regulation. Ban responded: “We need to engage all areas of industry and society in the transition to a low-carbon future, including industries that are presently associated with high greenhouse gas emissions.” Goodman also asked Christiana Figueres, the executive secretary of the U.N. Framework Convention on Climate Change, whether she would allow three youth activists who protested the influence of corporate lobbyists to be re-admitted to the this year’s climate summit after they were stripped of their badges.

9/16/14: UN Secretary General Ban Ki-Moon announces he will be “linking arms” with the participants of the People’s Climate March in New York City on September 21, one day before the climate summit he has convened.

21 September 2014 – Secretary-General Ban Ki-moon today told what is thought to be the largest ever march in the United States demanding measures to halt the advance of global climate change, that there is no “Plan B” for action as there is no “Planet B.”