For further video programs on the divestment controversy at Harvard and beyond see:

or click a snapshot picture of the QR code below with an iPhone or iPad equipped with any freely available QR Reader or QR Scanner app. 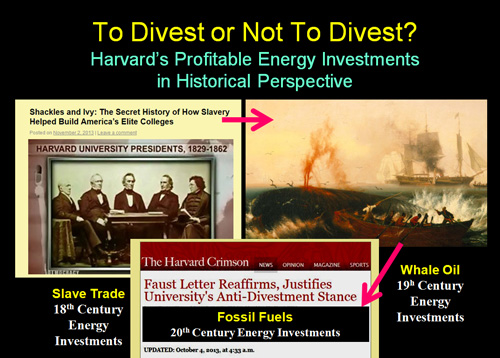 Harvard University has to decide whether to divest its holdings in fossil fuel extraction companies in response to student demands to do so.  Its decision to retain its investments in fossil fuels is consistent with its profiting in the past from the slave trade and from the nineteenth century boom in whaling and whale oil processing.  In this sense, the Harvard Corporation is proving itself consistent in its support of dehumanizing, brutalizing and ecologically disastrous investments, but students are arguing that it is time to reverse this historic pattern of investment.

Harvard, they argue, is most fundamentally educational institution.  It should not be organized primarily as an investment corporation, seeking maximum profit wherever it can be obtained in short-term financial schemes.   Students are, in effect, requesting that the university re-think its moral obligations and realign its behavior as one of America’s leading educational institutions away from the short term, short-sighted priorities of the financial investment community and toward the longer-term goals of improving the human condition and assuring global sustainability.

The student struggle has been discouraging when Harvard’s leadership under President Drew Faust seemed to have lost its way in these matters.  It is an open question whether under the new leadership of President Lawrence Bacow students will find a more comprehensive and responsible sense of Harvard’s historical role as an educational institution on a national and international stage.