A special segment of “Last Hours,” the frightening reality of global climate change, narrated by Thom Hartmann and Leonardo DiCaprio.

A group of activists arrested during the Flood Wall Street action against capitalism’s role in climate change have been found not guilty at their trial in New York City. On September 22, the day after the historic People’s Climate March, more than 100 people were arrested as thousands sat down in Manhattan’s Financial District to protest the role of big banks in backing the extractive industries fueling climate change. Ten of the defendants fought their charges in court, hoping to use the necessity defense to argue the urgency of climate change required civil disobedience. Instead, the judge ruled the New York City Police Department’s order for protesters to disperse was unconstitutional. But defense attorney Martin Stolar said the judge acknowledged the urgency of climate change.

Martin Stolar: “The court found all 10 defendants not guilty, releasing them and basically endorsing the position that they took, that climate change is a serious, urgent problem requiring attention, and basically complimenting the defendants for being out there and protesting. And then, because the police department made a mistake in the way they ordered people to leave the demonstration area, the judge said the order to leave was impermissible under the Constitution, and therefore he found all the defendants not guilty for violating an unlawful order.”

Snowy conditions have continued to engulf the United States. In New York, a plane skidded off a snowy runway at LaGuardia Airport, while in Kentucky, hundreds of drivers were stranded on a snowy highway for 20 hours. Scientists warn increased snowfall is part of a pattern of extreme weather driven by climate change.

A train carrying crude oil from the Bakken region of North Dakota has derailed in northern Illinois, causing a massive fire. The blaze was so intense the firefighters had to retreat to let the fire burn out on its own. The incident follows two previous oil train derailments last month which happened within days of each other in Ontario, Canada, and West Virginia.
https://www.youtube.com/watch?v=G_wUfcA885s

If enough of us decide that climate change is a crisis worthy of Marshall Plan levels of response, then it will become one
Naomi Klein

The Guardian is embarking on a major series of articles on the climate crisis and how humanity can solve it. In the first, an extract taken from the Introduction to THIS CHANGES EVERYTHING by Naomi Klein, the author argues that if we treat climate change as the crisis it is, we don’t just have the potential to avert disaster but could improve society in the process 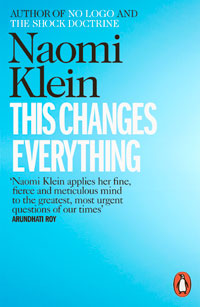 THIS CHANGES EVERYTHING is published this week in paperback by Penguin, £8.99

A voice came over the intercom: would the passengers of Flight 3935, scheduled to depart Washington DC, for Charleston, South Carolina, kindly collect their carry-on luggage and get off the plane. They went down the stairs and gathered on the hot tarmac. There they saw something unusual: the wheels of the US Airways jet had sunk into the black pavement as if it were wet cement. The wheels were lodged so deep, in fact, that the truck that came to tow the plane away couldn’t pry it loose. The airline had hoped that without the added weight of the flight’s 35 passengers, the aircraft would be light enough to pull. It wasn’t. Someone posted a picture: “Why is my flight cancelled? Because DC is so damn hot that our plane sank four inches into the pavement.”

Eventually, a larger, more powerful vehicle was brought in to tow the plane and this time it worked; the plane finally took off, three hours behind schedule. A spokesperson for the airline blamed the incident on “very unusual temperatures”.

The temperatures in the summer of 2012 were indeed unusually hot. (As they were the year before and the year after.) And it’s no mystery why this has been happening: the profligate burning of fossil fuels, the very thing that US Airways was bound and determined to do despite the inconvenience presented by a melting tarmac. This irony – the fact that the burning of fossil fuels is so radically changing our climate that it is getting in the way of our capacity to burn fossil fuels – did not stop the passengers of Flight 3935 from re-embarking and continuing their journeys. Nor was climate change mentioned in any of the major news coverage of the incident.

I am in no position to judge these passengers. All of us who live high consumer lifestyles, wherever we happen to reside, are, metaphorically, passengers on Flight 3935. Faced with a crisis that threatens our survival as a species, our entire culture is continuing to do the very thing that caused the crisis, only with an extra dose of elbow grease behind it. Like the airline bringing in a truck with a more powerful engine to tow that plane, the global economy is upping the ante from conventional sources of fossil fuels to even dirtier and more dangerous versions – bitumen from the Alberta tar sands, oil from deepwater drilling, gas from hydraulic fracturing (fracking), coal from detonated mountains, and so on.

“We will urge enlightened trusts, investment specialists, universities, pension funds and businesses to take their money away from the companies posing the biggest risk to us.”

As global warming argument moves on to politics and business, Alan Rusbridger explains the thinking behind our major series on the climate crisis 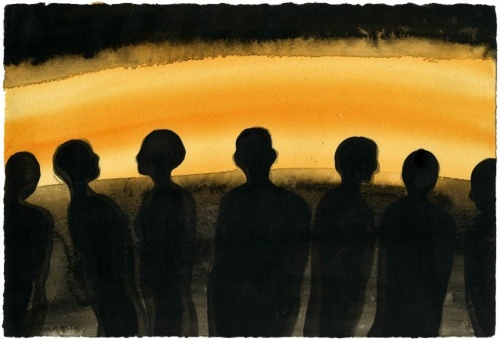 Journalism tends to be a rear-view mirror. We prefer to deal with what has happened, not what lies ahead. We favour what is exceptional and in full view over what is ordinary and hidden.

Famously, as a tribe, we are more interested in the man who bites a dog than the other way round. But even when a dog does plant its teeth in a man, there is at least something new to report, even if it is not very remarkable or important.

There may be other extraordinary and significant things happening – but they may be occurring too slowly or invisibly for the impatient tick-tock of the newsroom or to snatch the attention of a harassed reader on the way to work.

What is even more complex: there may be things that have yet to happen – stuff that cannot even be described as news on the grounds that news is stuff that has already happened. If it is not yet news – if it is in the realm of prediction, speculation and uncertainty – it is difficult for a news editor to cope with. Not her job.

Faculty of Harvard University to the President and Fellows

Our University invests in the fossil fuel industry: this is for us the central issue. We now know that fossil fuels cause climate change of unprecedented destructive potential. We also know that many in this industry spend large sums of money to mislead the public, deny climate science, control legislation and regulation, and suppress alternative energy sources.

We are therefore disappointed in the statements on divestment made by President Faust on October 3, 2013 and April 7, 2014. They appear to misconstrue the purposes and effectiveness of divestment. We believe that the Corporation is making a decision that in the long run will not serve the University well.

Our sense of urgency in signing this Letter cannot be overstated. Humanity’s reliance on burning fossil fuels is leading to a marked warming of the Earth’s surface, a melting of ice the world over, a rise in sea levels, acidification of the oceans, and an extreme, wildly fluctuating, and unstable global climate. These physical and chemical changes, some of which are expected to last hundreds, if not thousands, of years are already threatening the survival of countless species on all continents. And because of their effects on food production, water availability, air pollution, and the emergence and spread of human infectious diseases, they pose unparalleled risks to human health and life.

Divestment is an act of ethical responsibility, a protest against current practices that cannot be altered as quickly or effectively by other means. The University either invests in fossil fuel corporations, or it divests. If the Corporation regards divestment as “political,” then its continued investment is a similarly political act, one that finances present corporate activities and calculates profit from them.

On a drought-hit farm in Syria, December 2010. Credit: Caterina Donattini/IPS

UNITED NATIONS, Mar 2 2015 (IPS) – Was the four-year-old military conflict in Syria, which has claimed the lives of over 200,000 people, mostly civilians, triggered at least in part by climate change?

A new study by Columbia University’s Lamont-Doherty Earth Observatory says “a record drought that ravaged Syria in 2006-2010 was likely stoked by ongoing man-made climate change, and that the drought may have helped propel the 2011 Syrian uprising.”

“Added to all the other stressors, it helped kick things over the threshold into open conflict.” — climate scientist Richard Seager

Described as the worst ever recorded in the region, the drought is said to have destroyed agriculture in the breadbasket region of northern Syria, driving dispossessed farmers to cities, where poverty, government mismanagement and other factors created unrest that exploded in spring 2011.

“We’re not saying the drought caused the war,” said a cautious Richard Seager, a climate scientist at Lamont-Doherty Earth Observatory, who co-authored the study.

“We’re saying that added to all the other stressors, it helped kick things over the threshold into open conflict. And a drought of that severity was made much more likely by the ongoing human-driven drying of that region.”

Doreen Stabinsky, a professor of Global Environmental Politics at College of the Atlantic, Maine, U.S., told IPS that obviously the Syrian war is a complex situation that cannot be explained solely due to drought and the collapse of agricultural systems.

Ebola: A long way from over

Though this epidemic is waning, the conditions that fostered it remain, so it can strike again

The worst days of the Ebola epidemic appear to be past, but authorities speaking at Harvard warned Thursday against any sense of “triumphalism” until the last patient is healed and health system improvements are in place to prevent recurrences.

The experts on the disease and the campaign to fight it, both in West Africa and in the United States, reflected on lessons that were hard-won over the past year, during which 23,000 people were infected, mostly in three West African nations, and nearly 10,000 died.

A key lesson, according to Marshall Lyon, a physician at Emory University Hospital, where four U.S. Ebola patients were treated, is that defeating the disease is medically straightforward: provide supportive care as the patient’s body fights off the virus.

Did the CIA’s involvement in the 1980s drug trade lead to police militarization?

The Iran-Contra affair of the 1980s may be one of the root causes of modern day police militarization, which was on display in spectacular fashion last August in Ferguson, MO. An offspring of the decades long war on drugs, some contend, the rise of military-grade assault weapons and vehicles in local police forces can be traced to the CIA condoned importation of cheap drugs from Nicaragua. RT’s Lindsay France explores the connections.