A special segment of “Last Hours,” the frightening reality of global climate change, narrated by Thom Hartmann and Leonardo DiCaprio.

• See all questions and answers
• Read about the project

Environmentalists rally in Boston, US, to demand state legislators support a bill that would require divestment from the state’s fossil fuel holdings. Photograph: Paul Weiskel/Corbis

Divestment is the opposite of investment – it is the removal of stocks, bonds or funds from certain sectors or companies. The global movement for fossil fuel divestment (sometimes also called disinvestment) is asking institutions to move their money out of oil, coal and gas companies for both moral and financial reasons. These institutions include universities, religious institutions, pension funds, local authorities and charitable foundations.

Evidence shows that proven fossil fuel reserves are more than three times higher than we can afford to burn in order to stay below the generally agreed threshold for dangerous climate change. Fossil fuel companies are currently banking on extracting these reserves and selling them – and are actively prospecting for more. By supporting these companies, investors not only continue to fund unsustainable business models that are bound to make climate change worse, but they also risk their financial assets becoming worthless if international agreements on climate change are met. These investments are creating a “carbon bubble” worth trillions of dollars based on assets that could prove to be unusable. The Bank of England is conducting an investigation into whether these over-valued assets could plunge the world into another economic crisis. Although the impact of divestment on share prices may be relatively small, the reputational damage can have serious financial consequences.

Pressure is growing. A relentless climate movement is starting to win big, unprecedented victories around the world, victories which are quickly reshaping the consensus view. Bill McKibben

In the third piece in the Guardian’s major series on climate change, Bill McKibben describes how relentless climate movements have shifted the advantage towards fossil fuel resistance for the first time in 25 years. But he argues triumph is not certain – we must not rest till the industry is forced to keep the carbon in the ground.

[You can read previous pieces here and the Guardian’s coverage of Divestment… here.]

The official view: all eyes are on Paris, where negotiators will meet in December for a climate conference that will be described as “the most important diplomatic gathering ever” and “a last chance for humanity.” Heads of state will jet in, tense closed-door meetings will be held, newspapers will report that negotiations are near a breaking point, and at the last minute some kind of agreement will emerge, hailed as “a start for serious action”.

The actual story: what happens at Paris will be, at best, one small part of the climate story, one more skirmish in the long, hard-fought road to climate sanity. What comes before and after will count more. And to the extent Paris matters, its success will depend not on the character of our leaders but on how much a resurgent climate movement has softened up the fossil fuel industry, and how much pressure the politicians feel to deliver something.

The good news is, that pressure is growing. In fact, that relentless climate movement is starting to win big, unprecedented victories around the world, victories which are quickly reshaping the consensus view – including among investors – about how fast a clean energy future could come. It’s a movement grounded in the streets and reaching for the photovoltaic rooftops, and its thinking can be easily summarised in a mantra: Fossil freeze. Solar thaw. Keep it in the ground.

Thom talks to Mike Papantonio, attorney and host of Ring of Fire radio about new documents that shed light on the Weinberg group’s role in spreading scientific disinformation. 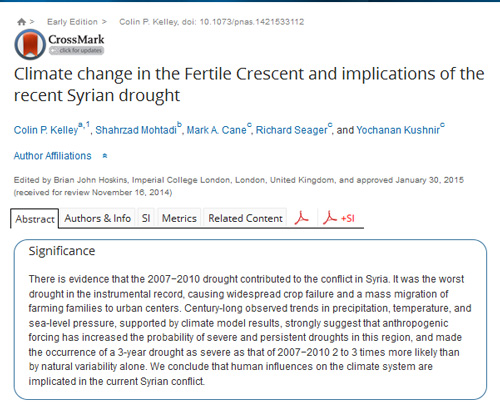 Before the Syrian uprising that began in 2011, the greater Fertile Crescent experienced the most severe drought in the instrumental record. For Syria, a country marked by poor governance and unsustainable agricultural and environmental policies, the drought had a catalytic effect, contributing to political unrest. We show that the recent decrease in Syrian precipitation is a combination of natural variability and a long-term drying trend, and the unusual severity of the observed drought is here shown to be highly unlikely without this trend. Precipitation changes in Syria are linked to rising mean sea-level pressure in the Eastern Mediterranean, which also shows a long-term trend.

There has been also a long-term warming trend in the Eastern Mediterranean, adding to the drawdown of soil moisture. No natural cause is apparent for these trends, whereas the observed drying and warming are consistent with model studies of the response to increases in greenhouse gases. Furthermore, model studies show an increasingly drier and hotter future mean climate for the Eastern Mediterranean. Analyses of observations and model simulations indicate that a drought of the severity and duration of the recent Syrian drought, which is implicated in the current conflict, has become more than twice as likely as a consequence of human interference in the climate system.

Pay 2 Play: How the Political System is Rigged 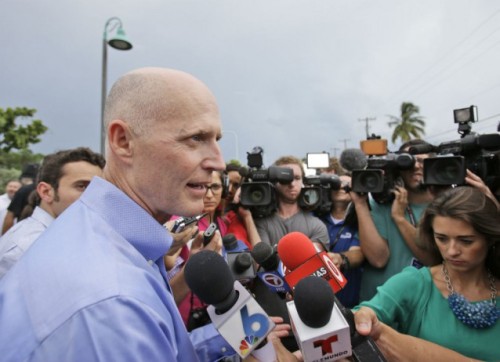 Florida Gov. Rick Scott speaks to members of the media, Wednesday, July 16, 2014 before a bill signing in Key Biscayne, Fla.

On Sunday, the Florida Center for Investigative Reporting published a story that alleged that Florida’s Department of Environmental Protection (DEP) had unofficially banned its employees from saying the words “climate change” and “global warming” in official communications. The charge of censorship clashes sharply with Florida’s vulnerability to the effects of climate change, particularly sea level rise.

But Ben Kirtman, professor of atmospheric science at the University of Miami who’s been in contact with members of the DEP and other state agencies in the past, wasn’t surprised by the report. He told ThinkProgress that he’d spoken with employees of other Florida agencies — he declined to name which ones — who had said that they, too, had been told not to talk about climate change in their professional capacity. So before he read the FCIR report, he knew that this censorship was likely occurring, at least at some agencies.

“The first thing they said to me was, ‘Oh we’re not allowed to talk about that,’” Kirtman said of a meeting in which he brought up climate change with employees of a state agency.

The FCIR report included multiple interviews with former employees of and volunteers with the state’s DEP, all of whom said the unwritten rule had been implemented soon after Gov. Rick Scott (R) took office in 2011. Both the DEP and the governor’s office denied the existence of a policy on talking about climate change to the FCIR, and Gov. Scott himself has also reportedly said that the claims aren’t true. The DEP confirmed its stance denying the policy to ThinkProgress Monday.

The tactics discussed – like lawsuits and grievances – reflect previous efforts to constrain critics of Singer and others through legal attacks, or the threat of them, several people involved with the movie say.
Credit: Film Festivals and Indie Films via Youtube

Before the release this Friday of the documentary “Merchants of Doubt,” S. Fred Singer sought the advice of nearly 30 climate skeptics about their chances of halting the movie and whether he should sue Naomi Oreskes, who co-authored the book on which it’s based.

“Has she finally gone too far?” asked Singer.

The discussion is outlined in a chain of emails initiated last fall by the 90-year-old physicist, who is featured in the film for his work questioning the amount of influence people have on rising temperatures. His request reached a mix of academics and others who have been mostly antagonistic toward mainstream climate findings. ClimateWire obtained the emails from a source who received them as a forwarded message.

Perhaps the strongest response came from James Enstrom, an epidemiologist who has challenged the science around the health risks of secondhand smoke and particulate air pollution. Enstrom told Singer that he could make “a very strong case” against Oreskes if Singer filed complaints with the universities she’s affiliated with.

Visit http://democracynow.org to watch the full independent, global news hour, read the transcript, search our archive, and to make a donation to support us.

Democracy Now!, is an independent global news hour that airs weekdays on 1,300+ TV and radio stations Monday through Friday. Watch our livestream 8-9am ET: http://democracynow.org