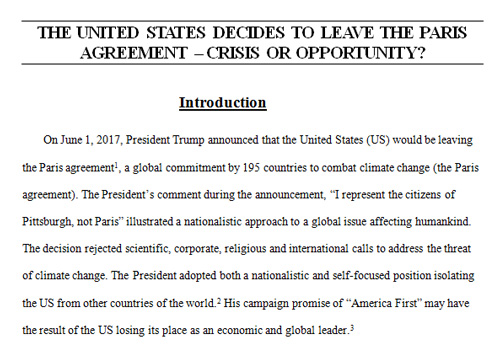 THE UNITED STATES DECIDES TO LEAVE THE PARIS AGREEMENT – CRISIS OR OPPORTUNITY?

On June 1, 2017, President Trump announced that the United States (US) would be leaving the Paris agreement , a global commitment by 195 countries to combat climate change (the Paris agreement). The President’s comment during the announcement, “I represent the citizens of Pittsburgh, not Paris” illustrated a nationalistic approach to a global issue affecting humankind. The decision rejected scientific, corporate, religious and international calls to address the threat of climate change. The President adopted both a nationalistic and self-focused position isolating the US from other countries of the world. His campaign promise of “America First” may have the result of the US losing its place as an economic and global leader.

In this paper, climate change is treated as a world problem to which human activity has contributed although it is recognized that this position is not accepted by all people. The paper provides information about the background leading to the Paris agreement, objectives adopted to limit CO2 emissions and global warming and responses to President Trump’s decision. It also reviews impacts of the decision and avenues for the future including possible conflicts over oil and natural gas resources.