Entire President’s Committee on Arts & Humanities Resigns, Calls on Trump to Step Down

The entire President’s Committee on the Arts and Humanities resigned on Friday, becoming the first entire presidential committee to resign in protest. In their resignation letter, the artists spoke out against Trump’s failure to quickly condemn the deadly white supremacist violence in Charlottesville, writing, “The Administration’s refusal to quickly and unequivocally condemn the cancer of hatred only further emboldens those who wish America ill.” They also called on Trump to step down. The first letter of each paragraph of their letter spells out the word “RESIST.”

Tens of Thousands March Against White Supremacy in Boston & Other U.S. Cities

Massive protests against white supremacy spread across the United States over the weekend, as tens of thousands of people took to the streets from coast to coast to condemn violent white nationalist groups and to call for the removal of Confederate monuments and other statues memorializing slavery and racism. In downtown Boston, 40,000 people poured into the streets around the Boston Common to protest a planned so-called “free speech rally” by white nationalists. The flood of counterprotesters so overwhelmed the white nationalist rally that aerial photos show only a handful of the extremists even showed up, and that they spent the day huddled in a gazebo on the Boston Common. This is one of the 40,000 counterprotesters.

Bq. Protester: “There are so many groups that are marginalized in our community, people of color, women, people of many gender expressions, and we need to stand together and say that’s not okay. As a country we have a right to free speech. That’s part of why we exist as a country. But there’s a difference to me between hateful speech and free speech. A lot of what the separatists are saying is hateful speech, and that’s not okay. We’re based on love as a country.”

President Trump first condemned the 40,000 people marching against white supremacy in Boston, tweeting, “Looks like many anti-police agitators in Boston. Police are looking tough and smart! Thank you.” Trump then twice attempted to tweet something positive about the protests, but both times had to delete his tweets after he confused “heel”—as in to obey—and “heal”—as in recover—tweeting, “Our country has been divided for decades. Sometimes you need protest in order to heel, & we will heel, & be stronger than ever before.”

Many commented that Trump’s error was a curious slip, given that former Secretary of State Hillary Clinton had famously used the word “heel”—spelled H-E-E-L—in her now-infamous 1996 comments in which she called Black youth “super-predators” and said, “We have to bring them to heel.”

Tens of thousands more protesters took to the streets of other U.S. cities over the weekend, a week after one person was killed and dozens more wounded by white supremacists and neo-Nazis at a protest in Charlottesville, Virginia, over the plan to remove a statue of Confederate General Robert E. Lee. On Saturday, thousands rallied at City Hall in Dallas, Texas, to call for the removal of the city’s three Confederate monuments. Overnight on Friday, someone spray-painted the word “Nazis” onto the Dallas statue of Confederate General Robert E. Lee.

Bq. Ryan Sawyers: “To me it’s very simple. A guy that gave his life, quite literally, to the enslavement of a race to prevent them from all sorts of things, including an education, should not have a school named after him.”

In New York City, members of the group Black Youth Project 100 rallied on Friday to demand the removal of a statue of James Marion Sims, a white doctor who is known as the “father of gynecology” after he experimented on enslaved Black women, without using anesthesia, in order to develop his surgical techniques. Activists are calling for the statue to be removed and replaced by a statue of three women—Anarcha, Betsey and Lucy—who were forced to suffer Sims’s medical experiments. 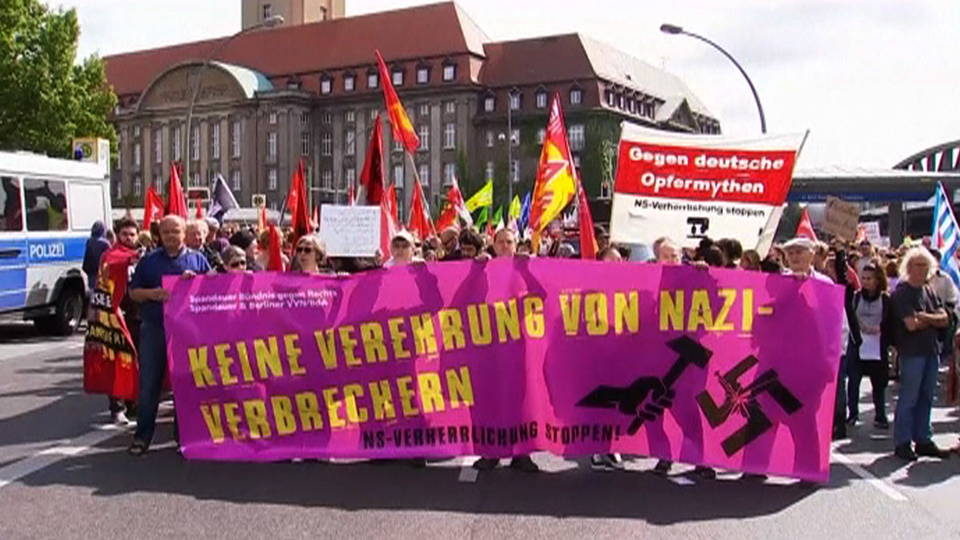 Thousands also protested against white supremacists and neo-Nazis at multiple international rallies over the weekend. In Berlin, Germany, more than 1,000 anti-fascists faced off against a much smaller crowd of neo-Nazis. This is counter-protester Anja Herbig.

Bq. Anja Herbig: “I am here today to honor my grandfather, who died in a concentration camp. He was German and was taken for not throwing a blind Jewish woman out of a bunker during an air raid, and lost his life for that. I am here today in remembrance of my grandfather.”

In Vancouver, Canada, thousands more gathered outside City Hall on Saturday to counter a group of anti-immigrant protesters. Hundreds more gathered in Quebec City to protest against a rally by far-right-wing extremists.

Forests cover about 30% of the planet, but deforestation is clearing these essential habitats on a massive scale. What is deforestation? Find out the causes, effects, and solutions to deforestation.

For more Great documentaries check out this playlist: https://www.youtube.com/playlist?list…

*All rights are reserved to the owners or licensed.*
* It is not intended to violate copyrighted material, which all belongs to its receptive owners. This Video Is Educational Purpose Only.*

Copyright Disclaimer Under Section 107 of the Copyright Act 1976, allowance is made for “fair use” for purposes such as criticism, comment, news reporting, teaching, scholarship, and research. Fair use is a use permitted by copyright statute that might otherwise be infringing. Non-profit, educational or personal use tips the balance in favor of fair use.

http://www.ted.com 400 years after Hudson found New York harbor, Eric Sanderson shares how he made a 3D map of Mannahatta’s fascinating pre-city ecology of hills, rivers, wildlife — accurate down to the block — when Times Square was a wetland and you couldn’t get delivery.

Announcement of CRISPR technology, which allows precise editing of the human genome, has been heralded as the future of individualized medicine, and a decried as a slippery slope to engineering individual human qualities. Of course, humans already know how to manipulate animal genomes through selective breeding, but there has been no appetite to try on humans what is the norm for dogs. That’s a good thing, says Dawkins. The results could well be dangerous. Does technology as a whole represent a threat to human welfare if it continues to evolve at its current rate? Not so fast, warns Dawkins. Comparing biological evolution to technological progress is an analogy at best. His newest book is Science in the Soul: Selected Writings of a Passionate Rationalist.

Beyond the Anthropocene | Johan Rockström

In just five decades, we have transitioned from being small world on a big planet to a big world on a small planet – we are now disturbing biomes that regulate the stability of the entire system. Johan Rockström, Executive Director, Stockholm Resilience Centre, Sweden, explains why we should be concerned about tipping points and how we can embrace the challenge of seeing opportunities in the necessary transformation towards global sustainability.

SONIC ACTS Festival – The Geologic Imagination
Graham Harman: Anthropocene Ontology
26 februrary 2015 – Paradiso, Amsterdam, the Netherlands
—
The proposed Anthropocene Epoch is not an Anthropocentric Epoch, for the obvious reason that it highlights the fragility of the human species rather than human supremacy. This split between the Anthropocene and the Anthropocentric compels us to recognise an important philosophical distinction that is seldom acknowledged. Namely, the fact that humans are involved as ingredients in the creation of some entity does not entail that the entity has no autonomous reality apart from humans. The Anthropocene climate is generated by humans and independently mysterious to us, and the same holds for other fields that have been ‘anthropocene’ from the start: human society, art, economics.

The Age of Sustainable Development

In this public lecture Professor Sachs will talk about his upcoming book, The Age of Sustainable Development, which explains the central concept for our age, which is both a way of understanding the world and a method for solving global problems – sustainable development. Sustainable development tries to make sense of the interactions of three complex systems: the world economy, the global society, and the Earth’s physical environment. It recommends a holistic framework, in which society aims for environmentally sustainable and socially inclusive development, underpinned by good governance. It is a way to understand the world, yet is also a normative or ethical view of the world: a way to define the objectives of a well-functioning society, one that delivers wellbeing for its citizens today and in future generations. This book describes key challenges and solutions pathways for every part of the world to be involved in problem solving, brainstorming, and determining new and creative ways to ensure inclusive and sustainable growth.

Jeffrey D. Sachs (@jeffdsachs) is a world-renowned professor of economics, leader in sustainable development, senior UN advisor, best selling author, and syndicated columnist whose monthly newspaper columns appear in more than 100 countries. He has twice been named among Time Magazine’s 100 most influential world leaders. He was called by the New York Times, “probably the most important economist in the world,” and by Time Magazine “the world’s best known economist.” A recent survey by The Economist Magazine ranked Professor Sachs as among the world’s three most influential living economists of the past decade.

Professor Sachs serves as the Director of The Earth Institute, Quetelet Professor of Sustainable Development, and Professor of Health Policy and Management at Columbia University. He is Special Advisor to United Nations Secretary-General Ban Ki-moon on the Millennium Development Goals, having held the same position under former UN Secretary-General Kofi Annan. He is Director of the UN Sustainable Development Solutions Network. He is co-founder and Chief Strategist of Millennium Promise Alliance, and is director of the Millennium Villages Project. Sachs is also one of the Secretary-General’s MDG Advocates, and a Commissioner of the ITU/UNESCO Broadband Commission for Development. He has authored three New York Times best sellers in the past seven years: The End of Poverty (2005), Common Wealth: Economics for a Crowded Planet (2008), and The Price of Civilization (2011). His most recent book is To Move the World: JFK’s Quest for Peace (2013). His upcoming book The Age of Sustainable Development will be published by Columbia University Press on March 10, 2015.

Jonathan Leape is the Executive Director of the International Growth Centre (IGC) at LSE.

The International Growth Centre (@The_IGC) aims to promote sustainable growth in developing countries by providing demand-led policy advice based on frontier research. Based at LSE and in partnership with Oxford University, the IGC is initiated and funded by DFID.