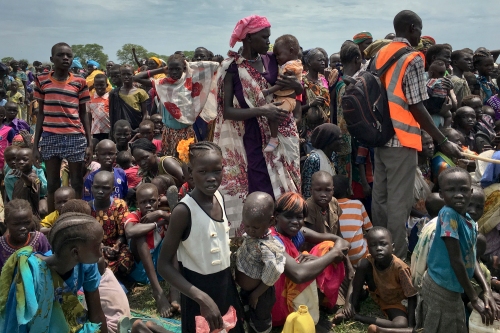 Men, women and children line up to be registered with the World Food Programme in South Sudan. South Sudan no longer has areas in famine, but almost 2 million people are on the brink of starvation. (Sam Mednick/AP)


Famine. 20 million people now on the brink in Africa and the Middle East. We’ve got reporters on the frontlines.

Right now, today, the largest humanitarian crisis since World War II is unfolding from Yemen to Nigeria. 20 million people on the edge of famine. But most Americans don’t know it. Three reporters from the Christian Science Monitor went to see the crisis first-hand. In Madagascar, Ethiopia and Somaliland. They join us. This hour On Point: Drought and hunger now in the Middle East and Africa.

In major climate news, soaring temperatures could make parts of South Asia too hot for human survival by 2100. That’s according to new research by scientists at MIT, who say as many as 1.5 billion people live in areas that could become uninhabitable during summer heat waves within only 83 years if climate change continues at its current pace.

Meanwhile, a new separate study, published by The Lancet, says heat waves could kill up to 152,000 people a year across Europe by 2100. Europe is currently experiencing a sweltering, record-breaking heat wave called “Lucifer.”

Back in the United States, in Louisiana, torrential downpours flooded parts of New Orleans over the weekend, submerging cars, inundating homes and schools, and forcing people to wade through hip-deep water in some neighborhoods. The flash floods overwhelmed the city’s sewerage system. The head of the Sewerage and Water Board, Cedric Grant, says the flooding was part of climate change.

Cedric Grant: “The frustration is that we are now in a different era. We are in the era of climate change, where we have these kind of rains every week—or, every month. And it’s not just us. It’s the rest of the country that’s experiencing the same weather patterns. We are in a situation where we now receive more rain than anybody could have imagined, on a recurring basis.”

On Friday, the Trump administration delivered an official notice to the United Nations saying it would withdraw the U.S. from the landmark 2015 Paris climate accord. 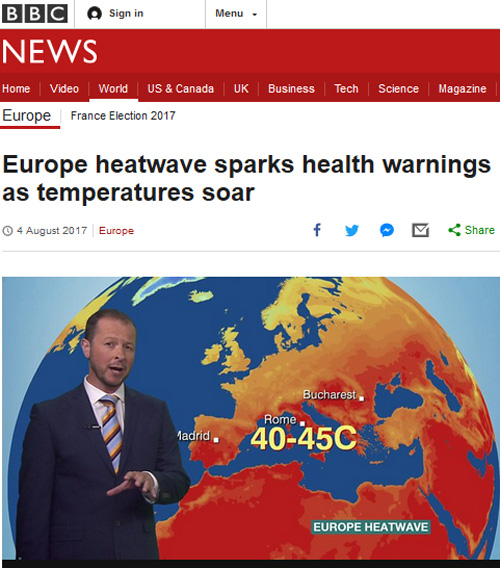 Parts of Europe are experiencing their most extreme heat in more than a decade as temperatures hit 44C (111F).

Several countries have issued health warnings as this week’s record-breaking weather conditions continue to affect swathes of the continent.

Sweltering temperatures in Italy have sparked wildfires, and dozens of towns and cities are on the health ministry’s maximum heat alert.

The heatwave has left some regions facing the threat of severe drought.

We talk a lot about the science of global warming, but in the end, the most important issues are those of simple morality.
Pope Francis’ recent visit to the US brought those questions into sharp focus for many Americans, and others around the world.

Jesse Reynolds is an expert in the area of climate engineering. He will be talking about some of the known and less known solutions to exponentially growing emission of carbon dioxide, but in a revolutionary way.

Jesse Reynolds is an expert in the area of climate engineering. He will be talking about some of the known and less known solutions to exponentially growing emission of carbon dioxide, but in a revolutionary way.

(Visit: http://www.uctv.tv) Over the last 30 years predictions of climate change as a threat to individuals, societies and nations have changed from possibilities to realities. Ethical issues associated with which individuals, companies, nations cause climate change, who might benefit from it, and who will suffer from the impacts have been part of the discussion from the beginning. How has thinking about the ethics of climate change evolved during that time and how does this relate to the ethics of extreme mitigation efforts like climate engineering? Margaret Leinen, UC San Diego Vice Chancellor for Marine Sciences, Director of Scripps Institution of Oceanography, and Dean of the School of Marine Sciences discusses what can be done, what is being done, and the ethical implications of deploying solutions. Series: “Exploring Ethics” [1/2017] [Public
Affairs] [Humanities] [Science] [Show ID: 31033]

Lukas Rüttinger, Senior Project Manager at adelphi on his report “Insurgency, Terrorism and Organised Crime in a Warming Climate”

“In our new report “Insurgency, Terrorism and Organised Crime in a Warming Climate”, we try to specifically answer the question ‘What are the links between non-state armed groups like Boko Haram and Islamic State and climate change?’ We look at the whole spectrum of different kinds of actors: we look at Boko Haram around Lake Chad, we look at Islamic State in Syria, we also analyse the Taliban in Afghanistan, and we look at organised crime in Guatemala.
What we found is that climate change does not create terrorists or criminals. But in a changing climate, the context within which these groups operate changes significantly. What we are seeing is that climate change creates a context within which these groups can proliferate, grow and rise.
There are two main mechanisms or relationships between climate change and how it affects the contexts within which these groups operate. One mechanism is that climate change helps or contributes to create fragility. And within fragile environments or contexts, these groups can operate more freely and they can grow and rise. The second mechanism is that climate change increasingly negatively impacts the livelihoods of local populations, for example if they depend on agriculture. And that makes them more vulnerable not only to climate change but also the recruitment by these groups.
In the political realm, there is tendency to define and understand non-state armed groups primarily within the global ‘war on terrorism’. However, in reality, those actors are much more complex and we need to broaden our perspective. We need to understand the complex nature. We need to understand the context within which they thrive. Only if we broaden our perspective, if we understand the complex interaction between political, economic, environmental and social factors, we are able to respond to the security threat.”

Europe’s heat wave and climate change | A sign of things to come?

Europe’s death toll from extreme weather could rise to more than 150,000 people a year by 2100 if nothing is done to curb the effects of climate change, study says
To read the full story: https://cbc.ca/1.4236629

BREAKING: Heatwave Lucifer is Making Europe ‘Hot as Hell’ for Another Week at 122 Degrees F.