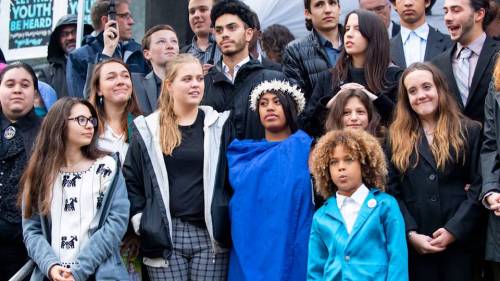 In environmental news, the 9th Circuit Court of Appeals has rejected a landmark youth climate lawsuit against the U.S. government, arguing the case does not belong in the courts. Juliana v. United States accuses the U.S. government of perpetuating the climate crisis and endangering the lives of citizens.
Judge Josephine Staton, the dissenting voice on the three-judge panel, wrote, “the government accepts as fact that the United States has reached a tipping point crying out for a concerted response — yet presses ahead toward calamity. It is as if an asteroid were barreling toward Earth and the government decided to shut down our only defenses.” A lawyer for the plaintiffs has vowed to appeal the ruling.
Click here to see Democracy Now’s interview with the lead plaintiff in the case, Kelsey Juliana.

As the impeachment trial gets underway, President Trump is in Davos, Switzerland, for the World Economic Forum, where he delivered a speech earlier today to the gathered elites. The climate crisis was the top priority for this year’s forum. But Trump focused on touting his tax cuts, immigration policies, and trade deals with China, Canada and Mexico. He also claimed that U.S. air and water was cleaner than ever. Trump has worked to dismantle environmental regulations since taking office and has denied climate change. Trump also told reporters in Davos the impeachment trial was a “hoax” and a “witch hunt.”

Meanwhile, a new Oxfam report released ahead of the World Economic Forum warns that “economic inequality is out of control,” with the world’s richest 1% owning twice as much wealth as nearly 7 billion people. The report also finds that just over 2,000 billionaires have more combined wealth than 4.6 billion people. The website Quartz calculated that Trump’s two-day appearance in Davos will cost U.S. taxpayers over $5.6 million.

Seventeen-year-old climate activist Greta Thunberg is also in Davos, where she spoke on a youth climate panel earlier today.

Greta Thunberg: “If we are to have a 6 to 7% chance of limiting the global average temperature rise to below 1.5 degrees Celsius, we had, on January 1st, 2018, about 420 gigatons of CO2 left to emit in that budget. … Since last summer. I’ve been repeating these numbers over and over again in almost every speech. But honestly, I don’t think I have once seen any media outlets or person in power communicate this and what it means. I know you don’t want to report about this. I know you don’t want to talk about this. But I assure you I will continue to repeat these numbers until you do.”

Voting Rights Advocate: The Impeachment of Trump Is Needed to Protect Our Elections & Democracy

The impeachment trial begins its proceedings in the Senate today amid accusations of Senate Majority Leader Mitch McConnell attempting to rush the impeachment process. Senators will have 16 hours for questions and four hours for debate, after 24 hours for opening arguments on each side. We speak with Rick Perlstein, historian and author, and Kristen Clarke, president and executive director of the Lawyers’ Committee for Civil Rights Under Law. Clarke says that thanks to the rules set by McConnell, Trump’s impeachment trial could be over within a week, with much of the debate taking place in the evening. The process is designed “to keep the Senate and the public in the dark,” she says.

The Senate opens the third impeachment trial of a U.S. president in the country’s history Tuesday, marking a historic day in Washington. Under proposed rules by Senate Majority Leader Mitch McConnell, each side will be given 24 hours over two days for opening arguments, after which senators will have 16 hours for questions and four hours for debate. The Senate will then vote on whether to hear from any new witnesses. Senate Minority Leader Chuck Schumer has said McConnell is trying to rush the impeachment process, while House Intelligence Chair Adam Schiff, who is one of the impeachment managers, has accused the CIA and NSA of withholding documents potentially relevant to the impeachment trial. This comes as President Trump has added several prominent lawyers to his legal team, including former independent counsel Kenneth Starr, whose probe led to the impeachment of Bill Clinton, and former Harvard University law professor Alan Dershowitz. In 2008, Starr and Dershowitz helped serial pedophile Jeffrey Epstein receive a sweetheart plea deal when he was arrested on sex trafficking charges. One of Epstein’s victims also accused Dershowitz of sexually assaulting her, but Dershowitz has long denied the charge. We speak with Rick Perlstein, historian and the author of several books, including “The Invisible Bridge: The Fall of Nixon and the Rise of Reagan,” which covered the Watergate investigations and Nixon’s impeachment.

In the Senate, Majority Leader Mitch McConnell has proposed a set of impeachment trial rules that critics describe as “rigged” and “intentionally designed to keep the Senate and the public in the dark.” Under the proposed rules, hearings would go well into the evening, hours in which the public would miss the opportunity to hear crucial pieces of evidence. The streamlined trial also means that the entire process could come to a completion in roughly a week — in stark contrast with the 1999 impeachment trial of President Bill Clinton that lasted over a month. “It’s important that the Senate do its job,” says Kristen Clarke, president of the National Lawyers’ Committee for Civil Rights Under Law, “so that the public and the Senate can understand what the president did here.”

Greta Thunberg Addresses Global Elite at Davos: Our House Is Still on Fire

The 17-year-old Swedish climate activist Greta Thunberg delivered a speech Tuesday to the world leaders and global elite gathered in Davos, Switzerland, for the World Economic Forum, one year after she first condemned the forum for its inaction on climate change. “We don’t need a ‘low-carbon economy.’ We don’t need to ‘lower emissions.’ Our emissions have to stop,” Thunberg said. “And until we have the technologies that at scale can put our emissions to minus, then we must forget about net zero. We need real zero.”

Only Greta Gets it Right (climate) – World Economic Forum, Jan 2020

The January 2020 Davos World Economic Forum climate apocalypse session, with video focusing on ‘only Greta’. You can see her sincerity and her impatience with the adult world, that is abandoning her generation to global climate chaos. She shows her great understanding of the climate science- she gets it right – global emissions have to decline NOW, THIS YEAR. Phony solutions can’t help

In response to Trump’s lawyers accusing Democrats of not being ready for trial, House Impeachment Manager Adam Schiff flips the script on Trump’s legal team corruptly working with Senate Republicans to block witnesses.

Teen climate activist Greta Thunberg took the stage at the World Economic Forum in Davos and admonished world leaders for doing nothing about the climate crisis.