What’s stopping the vulnerable Everglades from being healed?

The Florida Everglades are critical to the survival of local birds, reptiles and millions of people. As urban development has increased, the incredibly rare and bio-diverse habitat has become vulnerable to rising sea water encroachment. Billions of dollars have been spent on restoration, but both science and politics have made efforts more complicated. Special correspondent Duarte Geraldino reports.

How To Boil A Frog – Full Movie

This is the full international cut of the movie (53 minutes), available for free streaming on the condition that you go out and save civilization immediately after watching

Despite President Donald Trump’s executive order that aims to scale back environmental regulations, environmentalists and city leaders in San Francisco say they will push ahead with aggressive climate change policies. (March 29)

F-Word: Trump’s Budget is Socialism for the Rich and Corporates

Laura’s F-Word on why Donald Trump’s new budget isn’t about cuts — it’s about conversions. The budget wants to convert public dollars into private funding for military research and spending, for the only government apparatus that never gets audited.

Jared Kushner & Paul Manafort Sought for Questioning over Russia But Will It Be Behind Closed Doors?

http://democracynow.org – President Trump’s son-in-law Jared Kushner has agreed to testify to the U.S. Senate committee investigating ties between the Trump campaign and Russia during the 2016 election. He may also face questioning over a December meeting with the head of a U.S.-sanctioned Russian state development bank known as VEB. President Obama imposed the sanctions in 2014 over Russia’s military actions in Ukraine. The bank disclosed the meeting on Monday and said Kushner was acting as “the head of Kushner Companies.” This information contradicts the statements of White House Press Secretary Sean Spicer, who said on Monday that Kushner was acting as a Trump adviser during the meeting, not as a private developer. The revelations came on the same day Kushner agreed to testify to the Senate committee.

Full Interview: Jane Mayer on the Mercers & the Dark Money Behind the Rise of Trump & Bannon

http://democracynow.org – Full interview with the New Yorker’s Jane Mayer about her new article, “The Reclusive Hedge-Fund Tycoon Behind the Trump Presidency: How Robert Mercer Exploited America’s Populist Insurgency.” The piece looks at Robert Mercer, the man who is said to have out-Koched the Koch brothers in the 2016 election.

Democracy Now! is an independent global news hour that airs weekdays on nearly 1,400 TV and radio stations Monday through Friday. Watch our livestream 8-9AM ET: http://democracynow.org

http://democracynow.org – President Trump signed an executive order Tuesday to dismantle a slew of climate rules established by President Obama. If carried out, the executive order will virtually guarantee that the United States will fail to meet its 2015 Paris Agreement pledge to reduce emissions in order to curb the effects of climate change. The executive order marks the first step to undo Obama’s Clean Power Plan to limit emissions and replace coal-fired power plants with new solar and wind farms. For more, we speak with Jacqueline Patterson, director of the NAACP Environmental and Climate Justice Program.

Today’s hearing will try to reframe climate change as an unsettled debate, allowing skeptics and industry to influence regulations and research funding

“Alt-science” is finding a home in Washington.

In the age of “alternative facts” and the declaration of news as “fake” if it challenges previously held political beliefs, fringe and industry science that bucks years of federal research is gaining newfound prominence. Now, conclusions not published in any of the world’s premier science journals could soon be influencing federal policy, backed by Trump administration officials, congressional Republicans, conservative think tanks and a billionaire investor.

Within the field of climate science, there is virtually no debate about the basic cause of climate change. The vast majority of researchers long ago determined that human activity — chiefly the burning of fossil fuels — is causing the planet to warm.

There are, of course, some researchers with a long history of peer-reviewed studies who question man’s role in global warming and have concluded that more discussion is needed to determine its full extent. Still, the recipe for curtailing climate change, as determined by most of those who study climate, starts primarily with curbing the burning of fossil fuels.

Chimneys are seen through a window at a coal-fired power plant on a hazy day in Shimen county, central China’s Hunan Province, June 2, 2014. REUTERS/Jason Lee

China is still committed to the Paris climate change accord agreed in 2015, the Foreign Ministry said on Wednesday, after U.S. President Donald Trump signed an order to dismantle Obama-era climate change regulations.

Trump’s main target is former president Barack Obama’s Clean Power Plan, which required states to slash carbon emissions from power plants – a key factor in the United States’ ability to meet its commitments under the climate change accord reached by nearly 200 countries in Paris.

Chinese Foreign Ministry spokesman Lu Kang said climate change was a common challenge for everyone and the Paris agreement was a landmark that came about with the hard work of the international community, including China and the United States.

China is keen to be seen leading the way in reducing climate change which Trump has in the past dismissed as a “hoax”.

“We still uphold that all sides should move with the times, grasp the opportunities, fulfill their promises and earnestly take proactive steps to jointly push the enforcement of this agreement,” Lu told a daily news briefing.

“No matter how other countries’ policies on climate change change, as a responsible large developing country, China’s resolve, aims and policy moves in dealing with climate change will not change,” he added. 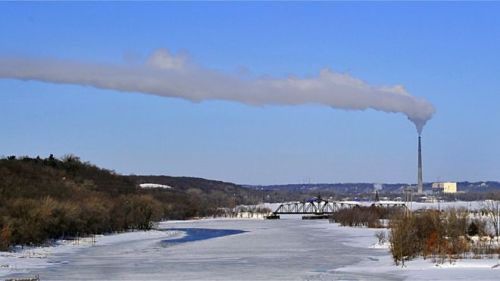 “This is, I think, one of the most historic attacks on climate and environmental action that the US has ever seen,” said Liz Perera from the Sierra Club.

Her words are certain to cheer Trump supporters everywhere.

Green “job-killing” regulations limiting energy production have long been a red rag for Donald Trump, as candidate and President.

His new energy independence executive order seeks to radically change the US narrative on climate change, its causes and its importance. The best way of fighting global warming according to the new outline is to create prosperity. Environmental regulation should be about air and water. CO2, in this light, is your friend.

Supporters believe that cutting back Obama climate regulations will create thousands of jobs in the newly liberated oil and gas industries.

His opponents agree the new order will be a job creator – but they’ll be jobs for lawyers, not in the coal fields.