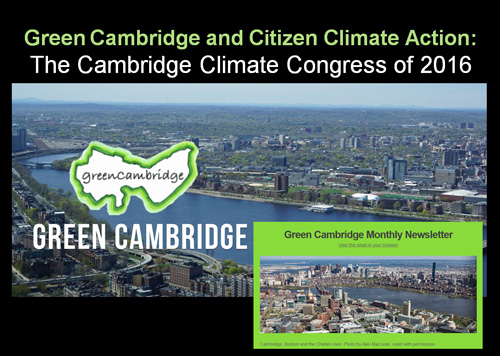 There is now no national leadership on climate issues.  Indeed some government officials seem to think it does not exist or that it is not worth devising a collective policy for the United States or the wider world when it comes to climate change.

One result of this is that on a local level responsible eco-citizens in Cambridge, Massachusetts —  as well as other in many locations around the world — are creating their own initiatives on climate issues.  Since governments have failed and the electoral process has become the captive of corporate interests intent upon oxidizing the Earth’s remaining terrestrial carbon reserves, responsible global citizens are linking both local and global action to address our collective crisis.

American coastal cities are beginning to experience a changing climate through extreme weather, and sea level rise will make this acute.

The changing climate will cause food shortages, but a “quick fix” of more petro-intensive agriculture will not save us.

Citizens of Boston will have to make a revolutionary change in their life plans and expectations for the future as sea-level rises.

Citizen action on climate issues around the world is becoming a very pronounced phenomenon as the apparatus of the nation-state has proven to be compromised by the effective cooptation of the nation-state decision-making structures by powerful international petro-conglomerates.  Citizen-scientist alliances are springing up around the world as global eco-citizens come to realize that they must unite to defend our precious and imperiled global ecosystem from the systematic assault and accelerated predation of fossil-fueled elites.

While the press was busy playing stenographer to the bafoonery of President Trump, the Senate confirmed the largest coup d’etat in history

Populist politicians around the world have won elections by waging a war against science. They will lose this war, and so will we all.

The ignorance of recently proposed cabinet members combined with their colosal arrogance is creating a danger for modern civilization.

As we take stock of what is at stake in the new administration in America, the news is disastrous for the global ecosystem.