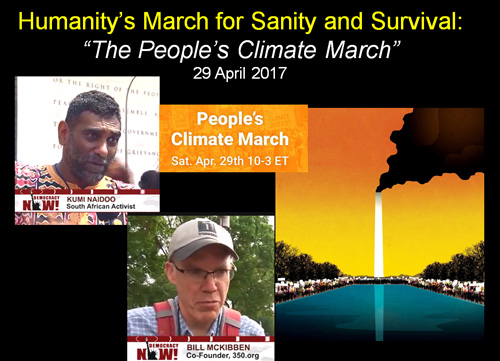 In Washington, D.C., across the country and around the world people marched on Trump’s 100th day in office to express their outrage at his climate change denialism and the catastrophic policies of fossil fuel extractivism that he is pursuing for the continued financial benefit of the wealthiest corporations in world history and the detriment of the whole of humanity. 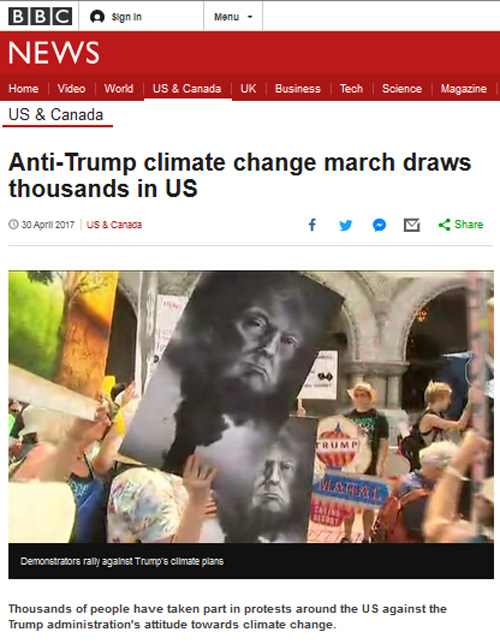 Thousands of people have taken part in protests around the US against the Trump administration’s attitude towards climate change.

The People’s Climate March was timed to coincide with the symbolic 100th day of Donald Trump’s presidency.

In Washington, a sea of protesters marched from Congress to the Washington Monument past the White House.

However, Mr Trump was not there. Instead, he was marking the milestone 100 days at a rally in Pennsylvania.

Organisers of the march are critical of Mr Trump’s attitude towards climate change.

Mr Trump has called climate change a hoax, and has vowed to pull the US out of the Paris Agreement.

They are also angry with the rollback of Obama-era environmental protections.

Reverend Leo Woodberry, of South Carolina, told a press conference ahead of the march: “We’re going to rise up and let them know that we’re sick and tired of seeing our children die of asthma.

Celebrities, including Leonardo DiCaprio and former Vice President Al Gore, were expected to march as well.

The sweltering heat has not deterred them. Their signs read “The seas are rising and so are we”; “Make America think again”; and “There is no planet B.”

This eclectic crowd of old and young – Buddhist monks and native American groups – are angry at the Trump administration’s attitude toward the environment.

April 29, 2017   WASHINGTON — Tens of thousands of demonstrators, alarmed at what they see as a dangerous assault on the environment by the Trump administration, poured into the streets here on Saturday to sound warnings both planetary and political about the Earth’s warming climate.

Starting at the foot of the Capitol, the protesters marched to the White House, surrounding the mansion while President Trump was inside on his 100th day in office. Once there, the demonstrators let out a collective roar, meant to symbolically drown out the voices of the administration’s climate change deniers.

The protesters, who had gathered for the latest in what has become near-weekly demonstrations of varying stripes against the president, then offered a chant: “Resistance is here to stay, welcome to your 100th day.”

Join the People’s Climate Movement LA this April 29th, when we’ll march in Wilmington (LA Harbor) to call attention to an urgent regional issue – the expansion of the Tesoro Oil Refinery – that has global climate change impacts. RSVP: http://bit.ly/PeoplesClimateLA