Noam Chomsky on Trump and Russia!

Video: Climate Change in the Caribbean, the case for action SPANISH SUBTITLES 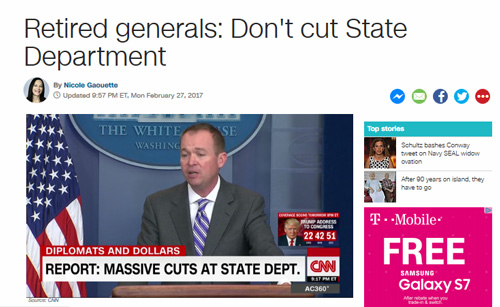 Washington (CNN)More than 120 retired generals and admirals signed a letter Monday pushing back on the White House’s proposal to make major cuts to diplomacy and development.

President Donald Trump’s first budget proposal would increase military spending by about $54 billion dollars, with administration officials telling CNN they would cut funding elsewhere by a similar amount this year, in large part by targeting the Environmental Protection Agency and the State Department.

“The State Department, USAID, Millennium Challenge Corporation, Peace Corps and other development agencies are critical to preventing conflict and reducing the need to put our men and women in uniform in harm’s way,” the generals wrote.

RELATED: Trump proposes $54 billion in cuts to ‘most federal agencies’
They went on to quote a 2013 remark by Defense Secretary James Mattis while commander of US Central Command: “If you don’t fully fund the State Department, then I need to buy more ammunition.”

Foreign aid makes up about 1% of the federal budget and is seen by most military and foreign policy experts as an excellent investment in US national security interests.

Donald Trump Goes All In for the Military-Industrial Complex 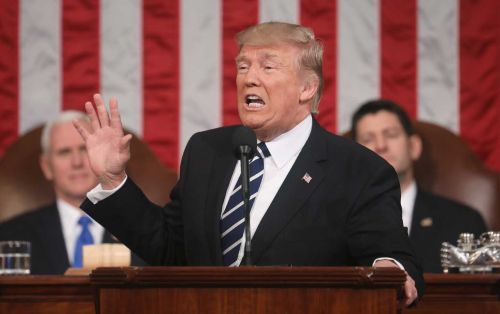 Donald Trump used his first Joint Address to the Congress of the United States to engage in an unprecedented flight of fiscal fantasy. Specifically, the president imagined that the United States could cut taxes for wealthy Americans and corporations, rip tens of billions of dollars out of domestic programs (and diplomacy), hand that money over to the military-industrial complex, and somehow remain a functional and genuinely strong nation.

Trump did not articulate this agenda quite so bluntly. His hour-long speech was far more traditional and temperate in character than his ballistic inaugural address. The themes were, for the most part, predictable: “construction of a great wall along our southern border,” “vetting procedures,” “for every one new regulation, two old regulations must be eliminated,” “school choice,” “construction of the Keystone and Dakota Access Pipelines.” The rhetoric was, by the standards of this presidency, disciplined. But the specifics were few. Only toward the end did the president get precise, saying, “I am sending the Congress a budget that rebuilds the military, eliminates the Defense sequester, and calls for one of the largest increases in national defense spending in American history.”