Water, Land and Climate – The Critical Connection: How We Can Rehydrate Landscapes Locally to Renew Climates Globally 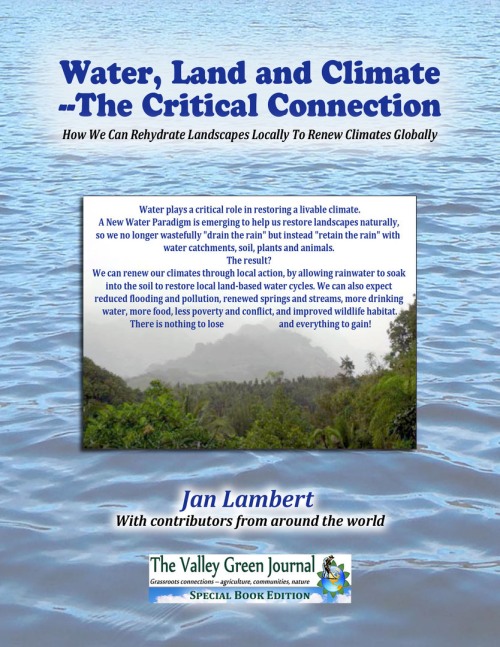 Jan Lambert, editor of The Valley Green Journal, in October 2015 has published her first book, with the help of contributors from around the world. It is titled, Water, Land and Climate – The Critical Connection: How We Can Rehydrate Landscapes Locally to Renew Climates Globally. Find out the latest thinking and action showing how important it is to welcome rain back into our landscapes, and restore local water cycles for humanity and for all life on Earth.

Water for the Recovery of the Climate – A New Water Paradigm

Water for the recovery of the climate – A new water paradigm

Presentation of the book “Water for the recovery of the climate: a new water paradigm” freely available on the website of waterparadigm.org

If there is insufficient water in the soil, on its surface and in plants, immense flows of solar energy cannot be transformed into the latent heat of water evaporation but are instead changed into sensible heat. The surface of the ground soon overheats, and as a result, a breakdown in the supply of water from the large water cycle arises over the affected land. Local processes over huge areas inhabited and exploited by human beings are changed into global processes and with processes that occur without the assistance of human beings; together they create the phenomenon known as global climate change. The part of global climate change caused by human activities then is largely based on the drainage of water from the land, the consequent rise in temperature differences triggering off mechanisms which cause a rise in climatic extremes. The disruption of the small water cycle is accompanied by growing extremes in the weather, a gradual drop in groundwater reserves, more frequent flooding, longer periods of drought and an increase in the water shortage in the region.

As President Trump moved to dismantle climate-change rules Tuesday, another lesser-known political battle was waiting in the wings: a Penn State professor’s testimony before a House committee chaired by a congressman firmly opposed to the scientist’s work.

Michael Mann, a professor of atmospheric science, is expected to testify Wednesday that climate change is real and that its chief cause is human activity.

But he’ll be speaking before Texas Republican Lamar Smith, chairman of the Committee on Science, Space and Technology. Smith is a fervent believer that climate change is a politically motivated manipulation of facts.

Mann was on the Intergovernmental Panel on Climate Change, an international panel of scientists assessing climate, and is widely viewed as a leader in the field. He’s also become a lightning rod and says he’s received death threats.

Smith has lined up three other speakers — academics and scientists who either doubt the methods used by people such as Mann to prove the climate is changing, or doubt that it is caused by human activity, including the burning of fossil fuels.

One of the speakers, Judith Curry, a recently retired professor at the Georgia Institute of Technology, relished in her blog this week the thought of lining up against Mann.

http://democracynow.org – We look at Robert Mercer, the man who is said to have out-Koched the Koch brothers in the 2016 election. The secretive billionaire hedge-fund tycoon, along with his daughter Rebekah, is credited by many with playing an instrumental role in Donald Trump’s election. “The Mercers laid the groundwork for the Trump revolution,” Trump’s chief strategist Stephen Bannon said. “Irrefutably, when you look at donors during the past four years, they have had the single biggest impact of anybody, including the Kochs.” Before Bannon and Kellyanne Conway joined the Trump campaign, both worked closely with the Mercers.

The Mercers bankrolled Bannon’s Breitbart News, as well as some of Bannon’s film projects. Conway ran a super PAC created by the Mercers to initially back the candidacy of Ted Cruz. While the Mercers have helped reshape the American political landscape, their work has all been done from the shadows. To talk more about the Mercers, we speak with Jane Mayer, staff writer at The New Yorker. Her latest piece is headlined “The Reclusive Hedge-Fund Tycoon Behind the Trump Presidency: How Robert Mercer exploited America’s populist insurgency.” She is also author of “Dark Money: The Hidden History of the Billionaires Behind the Rise of the Radical Right,” which just came out in paperback.

Steve Bannon has been propelled over the last year from fringe media outlier to top propagandist of the U.S. Empire as Trump’s Chief Strategist.

From his Wall Street roots and apocalyptic film career to his cultivation of alt-right bigots at Breitbart News, Abby Martin exposes Bannon’s true character in this explosive documentary.

Dissection of Bannon’s ideology of “economic nationalism” and desire to “Make America Great Again” reveals the danger of his hand in Trump’s agenda.

Rebecca Solnit on Climate Change, Resistance, Misogyny and “The Mother of All Questions”

http://democracynow.org – President Trump is expected to sign an executive order Tuesday to dismantle a slew of climate rules put in place by President Obama. The executive order marks the first step to undo President Obama’s Clean Power Plan to limit power plant emissions. The rule was seen as a critical element of the U.S. pledge to cut emissions as part of the 2015 Paris Agreement. Trump’s executive order is also expected to scrap regulations limiting methane emissions and open up the door for more coal mining and fracking on federal lands. For more, we speak with Rebecca Solnit, one of the nation’s most celebrated writers, who has spent years writing about climate change. She’s the author of more than 20 books, including, most recently, “The Mother of All Questions.”

The State of Michigan has reached a deal with the city of Flint, with the state agreeing to pay nearly $100 million to replace water lines to thousands of homes whose water has been poisoned by lead.

Flint’s water crisis began in 2014, after the unelected, state-appointed emergency manager for the city of Flint changed the source of the drinking water to the Flint river in order to try to save money. The river water corroded Flint’s pipes, causing toxic lead to leech into the city’s drinking water.

Officials say Flint’s water is still unsafe to drink without a filter — and many residents remain wary of drinking the water at all.

Peru: Death Toll from Worst Flooding in Decades Rises to 90

In Peru, the death toll from the country’s worst flooding in more than 30 years is rising. At least 90 people have now died. The flooding caused by torrential downpours linked to climate change has also destroyed tens of thousands of houses and displaced more than 100,000 people. The floods have also destroyed thousands of roads, bridges and highways across Peru, paralyzing commerce and making it harder to transport aid to affected regions. 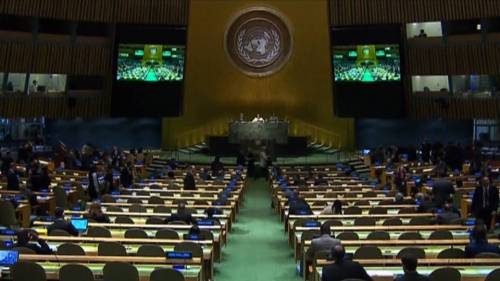 The United States led a boycott of U.N. talks on outlawing nuclear weapons on Monday. Despite the boycott, more than 100 nations did take part in the widely supported talks, although none of the participating countries possess nuclear weapons. This is U.S. Ambassador to the U.N. Nikki Haley.

Nikki Haley: “You’re going to see almost 40 countries that are not in the General Assembly today. And that’s 40 countries that are saying, in this day and time, we would love to have a ban on nuclear—on nuclear weapons. But in this day and time, we can’t honestly say that we can protect our people by allowing the bad actors to have them, and those of us that are good, trying to keep peace and safety, not to have them.”