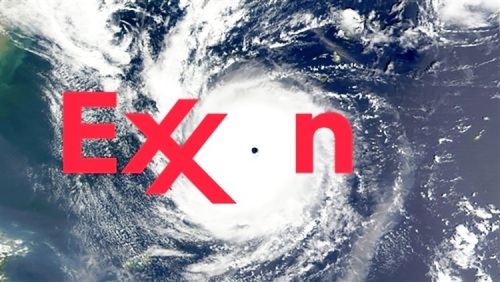 Exxon has known about the dangerous reality of climate change for decades. Photo credit: Greenpeace International

In the last few months, exposé after exposé has uncovered how Exxon knew about the dangerous reality of climate change before the media, politicians and just about everyone else. But instead of doing the right thing or even just sitting on its evidence, Exxon did something much more insidious. It tried to hide the truth from all of us.

As we approach COP21, a global meeting to address the climate crisis, let’s take a look back on four examples of how far Exxon has gone to stop climate action:

1. That Time Exxon Learned in 1982 That Climate Change Would Lead to Environmental Catastrophe

As early as 1977, Exxon’s own scientists were researching human-caused global warming. Exxon dedicated a substantial research budget to studying carbon emissions, developed sophisticated models and published its findings in peer reviewed journals. By 1982, an internal company report told Exxon management “there are some potentially catastrophic events that must be considered … Once the effects are measurable, they might not be reversible.”

So Exxon knew. But instead of acting to protect the planet, Exxon acted to protect its profits. It spent the next three decades funding and spreading climate denial. Exxon funded groups like ALEC, the Heartland Institute and the Advancement of Sound Science Coalition—all of which ran successful public climate denial campaigns. The Advancement of Sound Science got its start challenging the dangers of secondhand smoke, so climate denialism wasn’t a big stretch. And ALEC—a climate-denying front group that peddles its pro-corporate legislation to U.S. statehouses—spread misinformation so egregious that Shell’s investors forced the oil giant to cut ties.

Americans are living in an Orwellian state argue Academy Award-winning director Oliver Stone and historian Peter Kuznick, as they sit down with RT to discuss US foreign policy and the Obama administration’s disregard for the rule of law.
Both argue that Obama is a wolf in sheep’s clothing and that people have forgiven him a lot because of the “nightmare of the Bush presidency that preceded him.”
“He has taken all the Bush changes he basically put them into the establishment, he has codified them,” Stone told RT. “It is an Orwellian state. It might not be oppressive on the surface, but there is no place to hide. Some part of you is going to end up in the database somewhere.”
According to Kuznick, American citizens live in a fish tank where their government intercepts more than 1.7 billion messages a day. “That is email, telephone calls, other forms of communication.”
RT’s Abby Martin in the program Breaking the Set discusses the Showtime film series and book titled The Untold History of the United States co-authored by Oliver Stone and Peter Kuznick. 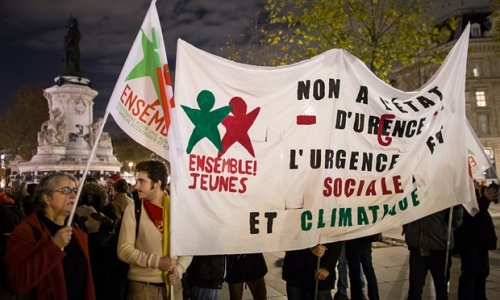 At least 24 climate activists have been put under house arrest by French police, accused of flouting a ban on organising protests during next week’s Paris climate summit, the Guardian has learned.

One legal adviser to the activists said many officers raided his Paris apartment and occupied three floors and a staircase in his block.

French authorities did not respond to requests for comment but lawyers said that the warrants were issued under state of emergency laws, imposed after the terror attacks that killed 130 people earlier this month.

The author and climate change campaigner, Naomi Klein, accused French authorities of “a gross abuse of power that risks turning the summit into a farce”.

“Climate summits are not photo opportunities to boost the popularity of politicians,” she told the Guardian. “Given the stakes of the climate crisis, they are by their nature highly contested. That is democracy, messy as it may be. The French government, under cover of anti-terrorism laws, seems to be trying to avoid this, shamefully banning peaceful demonstrations and using emergency powers to pre-emptively detain key activists.”

Since Thursday, three people have been placed under house arrest in Rens, two in Paris, two in Rouen and one in Lyons, according to campaigners. They may now only leave their houses to sign a post office register verifying their whereabouts, three times a day.

Joel Domenjoud, a legal activist, said that he had been served with a restraining order wrongly describing him as a “principal leader of the ultra-left movement” just hours after a judge refused to hear an appeal against the ban on the climate demo that he had petitioned for.

“I wasn’t there when they came to my house but my neighbour called me to say ‘What’s wrong? The stairs are full of cops from the first to the third floor!’” he said

In it,Oliver Stone and his collaborators focuses the wars in both Iraq and Afghanistan during the Bush administration.It presents how many American lives were lost as well as the torture incidents that American soldiers were involved in.As for the conspiracies involved,it also presents the personal motive of Bush was more of a personal vendetta against Saddam Hussein rather than catching the terrorist who are guilty of the September 11 attacks in New York.Added to that,it also tries to portray how the Bush administration tried to manipulate the terror warnings to the Americans to fulfill their political motives.

Days of Revolt – The Corporate Coup d’etat with Ralph Nader

In this episode of Days of Revolt, host Chris Hedges speaks with author, consumer advocate, and former presidential candidate Ralph Nader. Together, they trace the advancement of corporate control in the U.S. political system.

Cameron Fenton of 350.org says Alberta’s government will fail to keep fossil fuels in the ground despite its new policies supported both by Big Oil and environmental groups

Vulture Capitalists Are the Real Winners of Argentina’s Elections

For decades, Marshall Islanders have moved to the landlocked Ozark Mountains seeking better education, jobs and health care. This historical connection makes it a potential destination for those facing a new threat: global warming. (Nov. 27)

‘Everything the West has done was to create ISIS’ – John Pilger

Afshin Rattansi goes underground with John Pilger. Award winning journalist and author, John Pilger talks to us about how Washington, London and Paris gave birth to ISIS-Daesh. Plus we examine the media’s role in spreading disinformation ahead of a vote in Parliament for UK bombing of Syria. Afshin looks at the Autumn Statement and why in a time of high alert we are cutting the police force and buying drones. Also we look at which companies are benefitting from the budget. Plus Afshin is joined once again by former MP and broadcaster, Lembit Opik, to look at the weeks news from a cyber sinking feeling over Trident to budget boosts for the BBC.