For thousands of years, people have used nature to justify their political, moral, and social judgments. Such appeals to the moral authority of nature are still very much with us today, as heated debates over genetically modified organisms and human cloning testify.

The Moral Authority of Nature offers a wide-ranging account of how people have used nature to think about what counts as good, beautiful, just, or valuable. The eighteen essays cover a diverse array of topics, including the connection of cosmic and human orders in ancient Greece, medieval notions of sexual disorder, early modern contexts for categorizing individuals and judging acts as “against nature,” race and the origin of humans, ecological economics, and radical feminism. The essays also range widely in time and place, from archaic Greece to early twentieth-century China, medieval Europe to contemporary America.

Scholars from a wide variety of fields will welcome The Moral Authority of Nature, which provides the first sustained historical survey of its topic. 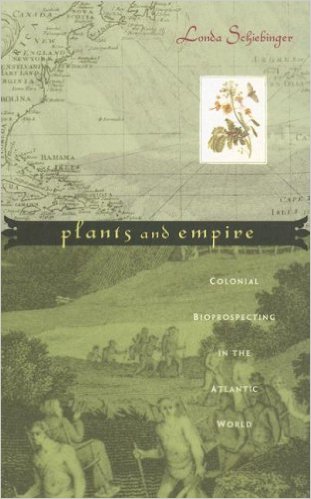 Plants seldom figure in the grand narratives of war, peace, or even everyday life yet they are often at the center of high intrigue. In the eighteenth century, epic scientific voyages were sponsored by European imperial powers to explore the natural riches of the New World, and uncover the botanical secrets of its people. Bioprospectors brought back medicines, luxuries, and staples for their king and country. Risking their lives to discover exotic plants, these daredevil explorers joined with their sponsors to create a global culture of botany.

But some secrets were unearthed only to be lost again. In this moving account of the abuses of indigenous Caribbean people and African slaves, Schiebinger describes how slave women brewed the “peacock flower” into an abortifacient, to ensure that they would bear no children into oppression. Yet, impeded by trade winds of prevailing opinion, knowledge of West Indian abortifacients never flowed into Europe. A rich history of discovery and loss, Plants and Empire explores the movement, triumph, and extinction of knowledge in the course of encounters between Europeans and the Caribbean populations.

This widely acclaimed book analyzes the political effects of scientific research as exemplified by one field, economic botany, during one epoch, the nineteenth century, when Great Britain was the world’s most powerful nation. Lucile Brockway examines how the British botanic garden network developed and transferred economically important plants to different parts of the world to promote the prosperity of the Empire. In this classic work, available once again after many years out of print, Brockway examines in detail three cases in which British scientists transferred important crop plants-cinchona (a source of quinine), rubber and sisal-to new continents. Weaving together botanical, historical, economic, political, and ethnographic findings, the author illuminates the remarkable social role of botany and the entwined relation between science and politics in an imperial era.

In the early modern world, botany was big science and big business, critical to Europe’s national and trade ambitions. Tracing the dynamic relationships among plants, peoples, states, and economies over the course of three centuries, this collection of essays offers a lively challenge to a historiography that has emphasized the rise of modern botany as a story of taxonomies and “pure” systems of classification. Charting a new map of botany along colonial coordinates, reaching from Europe to the New World, India, Asia, and other points on the globe, Colonial Botany explores how the study, naming, cultivation, and marketing of rare and beautiful plants resulted from and shaped European voyages, conquests, global trade, and scientific exploration.

From the earliest voyages of discovery, naturalists sought profitable plants for king and country, personal and corporate gain. Costly spices and valuable medicinal plants such as nutmeg, tobacco, sugar, Peruvian bark, peppers, cloves, cinnamon, and tea ranked prominently among the motivations for European voyages of discovery. At the same time, colonial profits depended largely on natural historical exploration and the precise identification and effective cultivation of profitable plants. This volume breaks new ground by treating the development of the science of botany in its colonial context and situating the early modern exploration of the plant world at the volatile nexus of science, commerce, and state politics.

Written by scholars as international as their subjects, Colonial Botany uncovers an emerging cultural history of plants and botanical practices in Europe and its possessions.

Colonial America presented a new world of natural curiosities for settlers as well as the London-based scientific community.

In American Curiosity, Susan Scott Parrish examines how various peoples in the British colonies understood and represented the natural world around them from the late sixteenth century through the eighteenth. Parrish shows how scientific knowledge about America, rather than flowing strictly from metropole to colony, emerged from a horizontal exchange of information across the Atlantic.

Delving into an understudied archive of letters, Parrish uncovers early descriptions of American natural phenomena as well as clues to how people in the colonies construed their own identities through the natural world. Although hierarchies of gender, class, institutional learning, place of birth or residence, and race persisted within the natural history community, the contributions of any participant were considered valuable as long as they supplied novel data or specimens from the American side of the Atlantic. Thus Anglo-American nonelites, women, Indians, and enslaved Africans all played crucial roles in gathering and relaying new information to Europe.

Recognizing a significant tradition of nature writing and representation in North America well before the Transcendentalists, American Curiosity also enlarges our notions of the scientific Enlightenment by looking beyond European centers to find a socially inclusive American base to a true transatlantic expansion of knowledge.

Nature’s Government: Science, Imperial Britain, and the “Improvement” of the World | Richard Drayton 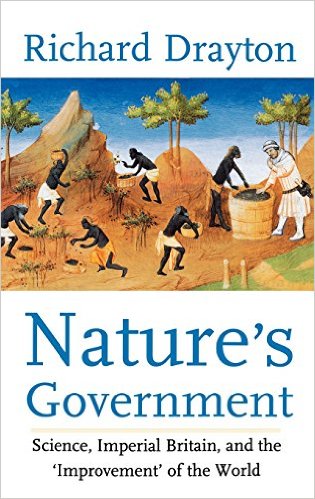 ‘Nature’s Government’ is a daring attempt to juxtapose the histories of Britain, western science, and imperialism. It shows how colonial expansion, from the age of Alexander the Great to the twentieth century, led to complex kinds of knowledge. Science, and botany in particular, was fed by information culled from the exploration of the globe.

At the same time science was useful to imperialism: it guided the exploitation of exotic environments and made conquest seem necessary, legitimate, and beneficial. Drayton traces the history of this idea of ‘improvement’ from its Christian agrarian origins in the sixteenth century to its inclusion in theories of enlightened despotism. It was as providers of legitimacy, as much as of universal knowledge, aesthetic perfection, and agricultural plenty, he argues, that botanic gardens became instruments of government, first in Continental Europe, and by the late eighteenth century, in Britain and the British Empire.

At the Royal Botanic Gardens at Kew, the rise of which throughout the nineteenth century is a central theme of this book, a pioneering scientific institution was added to a spectacular ornamental garden. At Kew, ‘improving’ the world became a potent argument for both the patronage of science at home and Britain’s prerogatives abroad. ‘Nature’s Government’ provides a portrait of how the ambitions of the Enlightenment shaped the great age of British power, and how empire changed the British experience and the modern world. Richard Drayton was born in the Caribbean and educated at Harvard, Oxford, and Yale. A former Fellow of St. Catharine’s College, Cambridge, and Lincoln College, Oxford, he has also been Associate Professor of History at the University of Virginia.

This book explores the links among ecology, disease, and international politics in the context of the Greater Caribbean – the landscapes lying between Surinam and the Chesapeake –

in the seventeenth through early twentieth centuries. Ecological changes made these landscapes especially suitable for the vector mosquitoes of yellow fever and malaria, and these diseases wrought systematic havoc among armies and would-be settlers.

Because yellow fever confers immunity on survivors of the disease, and because malaria confers resistance, these diseases played partisan roles in the struggles for empire and revolution, attacking some populations more severely than others. In particular, yellow fever and malaria attacked newcomers to the region, which helped keep the Spanish Empire Spanish in the face of predatory rivals in the seventeenth and early eighteenth centuries. In the late eighteenth and through the nineteenth century, these diseases helped revolutions to succeed by decimating forces sent out from Europe to prevent them.

“Brilliant. Ranging freely across the ‘Greater Caribbean’ … McNeill makes a riveting case that the primary driver in the colonial conflicts there was not political or economic but microbiological.”
Charles C. Mann, Wall Street Journal

“J. R. McNeill’s new book does more than exhibit his usual gifts – breadth of range, mastery of material, depth of insight, freedom of thought, clarity of expression. It has changed the way I think about empires of the eighteenth and nineteenth centuries and will challenge many readers’ assumptions about the limits of human agency in shaping great events.”
Felipe Fernandez-Armesto, University of Notre Dame

“In this authoritative and engaging book, J. R. McNeill argues convincingly that disease played a pivotal role in many of the momentous events of Caribbean history. He shows how the region’s disease ecology changed following the advent of European colonization and how this served and then subverted the interests of the Caribbean’s oldest colonial powers. Mosquito Empires is indispensable to any student of Caribbean history or the history of disease.”
Mark Harrison, Wellcome Unit for the History of Medicine, University of Oxford

“Who would have guessed that the mosquito played such a vital role, shaping the fate of empires and revolutions, in such a vitally important part of the world? This provocative book is an eye-opener, written with great verve and wit.”
Philip Morgan, Johns Hopkins University

“For most of the last five centuries, the Atlantic empires – European and North American – wrested, fought wars, and killed thousands of citizens and slaves for possession of the wealth swaying in the fields of the Caribbean islands and coastlines. The dominant factors in the long conflict, no matter what the protagonists claimed, were not political or religious or even economic but septic, that is, the microbes of yellow fever and malaria. J. R. McNeill’s book is by far the clearest, best informed, and scientifically accurate of the accounts available on this sugary conflict.”
Alfred W. Crosby, Professor Emeritus of History, Geography, and American Studies, University of Texas at Austin

“Drawing on an enormous documentary source base, culled from many archives and texts in several languages, and ranging effortlessly across military history and medical science, J. R. McNeill’s book is a major achievement. Henceforth, histories of empire, warfare, and international relations that neglects the environmental context of the events they recount will be seriously deficient.”
Gabriel Paquette, Times Literary Supplement

“… this is a truly impressive book that makes a major contribution to our understanding of the Greater Caribbean and beyond.”
Matthew Mulcahy, William and Mary Quarterly

“McNeill’s seminal and path-breaking new study will surely play a leading role in providing a clear historical understanding of colonization and its aftermath in a vast area of the Western Hemisphere.”
American Historical Review

“… a valuable addition to the historiography of the seventeenth- and eighteenth-century Caribbean.”
Mariola Espinosa, Journal of Interdisciplinary History

This book explores the links among ecology, disease, and international politics in the context of the Greater Caribbean in the seventeenth through early twentieth centuries.

Green Imperialism is the first book to document the origins and early history of environmentalism, concentrating especially on its hitherto unexplained colonial and global aspects. It highlights the significance of Utopian, Physiocratic, and medical thinking in the history of environmentalist ideas. The book shows how the new critique of the colonial impact on the environment depended on the emergence of a coterie of professional scientists, and demonstrates both the importance of the oceanic island “Eden” as a vehicle for new conceptions of nature and the significance of colonial island environments in stimulating conservationist notions.

Canadian women have taken a leading role in defining the major environmental justice issues and providing leadership for global citizenship.