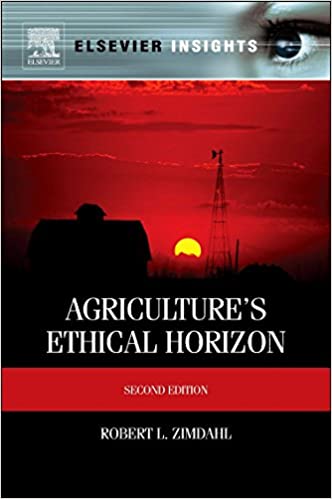 The second edition of Agriculture’s Ethical Horizon is a carefully considered application of philosophical concepts, such as utilitarianism and positivism, to the practice of agricultural science. Author Robert Zimdahl argues for an approach to agriculture guided by foundational values, and addresses the questions: What are the goals of agricultural and weed science? What should their goals be? How do and how should the practitioners of agriculture address complex ethical questions?

This book engages students, researchers, and professionals across disciplines including horticulture, soil and plant science, entomology, and more, all without requiring a background in philosophy. It examines topics such as scientific truth and myth, moral confidence in agriculture, the relevance of ethics to sustainability, and biotechnology. New to this edition is a chapter examining the raising, housing and slaughter of animals for human food, and a chapter on alternative and organic agricultural systems.

Praise for the first edition: “This book takes on the largest scientific and ethical challenge of our past and present and does so in an engaging manner.” – Wes Jackson, President, The Land Institute

Agriculture’s Ethical Horizon is both a competent review of value conflicts in agriculture and a striking tale of the intellectual, even spiritual, transformation of an agriculturalist who was a leader in one agriculture’s most dramatic technical revolutions, the development of chemical weed control. Everyone will find something to criticize. No alert reader will be left unaffected and most will have responses which, in their sense of being intellectually cool, they will have to admit are profoundly emotional–one way or the other. I predict that whole conferences will be based on this book. Historians of environmental sciences should pay particular attention.” – Stanislaus J. Dundon, California State University, Sacramento

Robert L. Zimdahl is a Professor of Weed Science at Colorado State University. He received his Ph.D. in Agronomy from Oregon State University. Among his many honors and awards, Dr. Zimdahl was elected a Fellow of the Weed Science Society of America in 1986 and currently serves as editor of that society’s journal, Weed Science. He has been a member of several international task forces and has authored a number of books and articles on the subject of weed science. He is the author of Fundamentals of Weed Science, and Six Chemicals that Changed Agriculture both from Elsevier.