Feb 20, 2021
This EBC Leadership webinar will feature Kathleen Theoharides, Secretary of the Executive Office of Energy and Environmental Affairs (EOEEA) for the Commonwealth of Massachusetts.

For her keynote presentation, Secretary Theoharides will reflect on her accomplishments in office since being appointed Secretary by Governor Baker. She will also look forward and discuss her priorities for 2021 that reflect those issues that are important to the strategic environmental, energy, and climate goals of the Baker administration.

In her role as Secretary, Ms. Theoharides oversees the Commonwealth’s six environmental, natural resource, and energy regulatory agencies, including:

Open Discussion: Following Secretary Theoharides’s presentation, Catherine Finneran, Chair of the Environmental Business Council and Vice President for Sustainability and Environmental Affairs with Eversource Energy will moderate an open discussion with the Secretary and the audience on issues of concern to the EBC membership and their clients.

“Without innovation, we will not solve climate change. We won’t even come close,” Gates says. Anderson Cooper reports for 60 Minutes.

The covid-19 pandemic has devastated the travel industry. But as vaccines are rolled out and global travel slowly picks up, how will the industry evolve, and will holidays ever be the same again? Read more here: https://econ.st/3aA2row​

Sign up to The Economist’s daily newsletter to keep up to date with our latest coverage: https://econ.st/3aor3kg​

Read our special report about the future of tourism: https://econ.st/3bnP1vc​

Read about why Covid-19 has had such a devastating impact on the travel industry, and how the industry is adapting: https://econ.st/3qxf4X7​

How ‘staycations’ are helping the hotel industry survive: https://econ.st/2ZwoTZa​

Read about how the hospitality industry is adapting to remote workers: https://econ.st/2NBFtV9​

Is hydrogen the key to greener air travel? https://econ.st/3qy5OC0​

Official Website: https://to.pbs.org/2MFmZSR​ | #BlackChurchPBS​​ Booker T. Washington said if you want to lift yourself up, lift up someone else. He learned and then taught others how to serve more deeply, not as a slave, but as a free man. In his words, he was eager to learn, but it was the Christ-like character of his teachers that showed him a new way of life. Take a look at a few pivotal people who brought the reality of the right to gather, read, sing, worship, and share these truths that should have always been self-evident in the short animated series, Cornerstones: Found Voices of the Black Church. Learn more at https://to.pbs.org/3anDYCJ​ Watch The Black Church: This Is Our Story,

This Is Our Song on your local PBS station, the PBS Video App — and on YouTube through March 16: https://youtu.be/BijAOYktT4k​
Subscribe to the PBS channel for more clips: https://www.youtube.com/PBS/​​
Enjoy full episodes of your favorite PBS shows anytime, anywhere with the free PBS Video App: https://to.pbs.org/2QbtzhR​

Just east of the San Francisco Bay Area are the Berkeley Hills Walls–remnants of a massive, stone wall that stretches a distance of over fifty miles, in Season 3, Episode 7, “Marco Polo Discovers America.”

Feb 13, 2019
On February 6, 2019 some 200 students, faculty, activists, and community members crowded into Tishman Auditorium at The New School in New York City to hear Vandana Shiva, Mark Bittman, and author Timothy A. Wise discuss the battle for the future of food. Wise, director of the Land and Food Rights Program at Small Planet Institute, was in New York for the release of his new book, Eating Tomorrow: Agribusiness, Family Farmers, and the Battle for the Future of Food. Check out the Eating Tomorrow book page on the Small Planet Institute website to read reviews, view media coverage, and of course, for updates on upcoming book events: https://www.smallplanet.org/eating-to…

Siobhan Daly is currently a student on the MSt in Literature and Arts at the University of Oxford. She has an MA from King’s College London and the Royal Academy of Dramatic Arts in Text and Performance, as well as a BA (Hons) in English and History from Goldsmiths College, University of London. She has an interest in post-colonialism and Oxford’s influence on Empire.

Excerpted from: “Oxford and Empire: Oxford and Oriental Studies.” 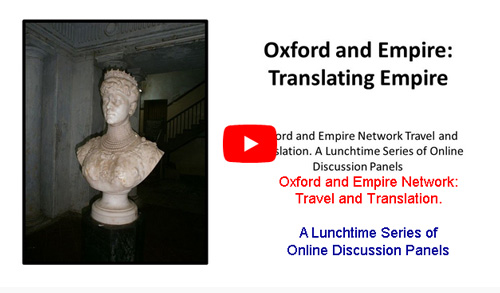 Sponsored by the: Oxford and Empire Network and The Oxford Research Center in the Humanities (TORCH)

Nandini Das and Emily Stevenson, ‘Hakluyt and Empire’ [Excerpt from: Oxford and Empire: Voyages and Voyagers]

[Excerpt from program 4 in the series: Oxford & Empire: Travel & Translation]

This series will bring together researchers in Oxford and elsewhere to foster interdisciplinary communication and a more consolidated examination of Oxford’s imperial legacies. It will therefore include a diversity of scholars and students who are working in this area in different disciplines and fields.

Nandini Das is Professor of Early Modern Literature and Culture at the University of Oxford. She works on Renaissance literature and cultural history, with special emphasis on travel and cross-cultural encounters, and issues of migration and belonging. She has edited and written on sixteenth and early seventeenth century romance and prose fiction in Robert Greene’s Planetomachia (2007), and Renaissance Romance: The Transformation of English Prose Fiction, 1570-1620 (2011), among others, and published widely on travel and cross-cultural encounter. Most recently, with Tim Youngs, she co-edited The Cambridge History of Travel Writing (2019), which covers global Anglophone and non-Anglophone travel writing from antiquity to the internet. She is volume editor of Elizabethan Levant Trade and South Asia in the forthcoming edition of Richard Hakluyt’s The Principal Navigations, to be published by Oxford University Press, and project director for ‘Travel, Transculturality and Identity in Early Modern England’ (TIDE), funded by the European Research Council. She regularly presents television and radio programmes on topics related to her research

Emily Stevenson is a doctoral candidate at the University of Oxford. Her research focuses on reconstructing the networks, both textual and social, which surrounded late sixteenth century English travel writers. Her doctoral work focuses particularly on Richard Hakluyt, the editor of both editions of The Principal Navigations, Voyages, Traffiques and Discoveries of the English Nation, a major source for the history of Elizabethan travel and narratives of early English empire. She is also a member of TIDE (Travel, Transculturality and Identity in England c.1550-1700), an ERC funded project based at the University of Oxford.

Excerpted from:  Oxford and Empire: Voyages and Voyagers

[This study was drawn in part from research conducted in the records of St. Johns College, Oxford.]

Elisabeth Grass is a DPhil student in the History Faculty, University of Oxford, and holds an AHRC Collaborative Doctoral Award with the National Trust. Through the prism of the country estate, her research focuses on the socio-cultural activities of West Indian slaveholders in Britain in the eighteenth century. It offers perspectives on wealth derived from enslaved labour and its legacy in our built environment. Elisabeth works closely with the Colonial Countryside initiative and has given presentations and training to staff and volunteers in the heritage sector. A rare book specialist by profession, she is particularly interested in the colonial dimensions of collecting, and in the country house library as a repository of imperial knowledge.

Excerpt of “Oxford and Empire: Oxford and Oriental Studies”