Jazz is a 2001 television documentary miniseries, directed by Ken Burns. It was broadcast on PBS in 2001 and was nominated for an Emmy Award for Outstanding Non-Fiction Series (Informational). Its chronological and thematic episodes provided a history of jazz, emphasizing innovative composers and musicians and American history.

Bloody Foreigners: The Story of Immigration to Britain, Robert Winder

The story of the way Britain has been settled and influenced by foreign people and ideas is as old as the land itself. In this original, important and inspiring book, Robert Winder tells of the remarkable migrations that have founded and defined a nation.

‘Our aristocracy was created by a Frenchman, William the Conqueror, who also created our medieval architecture, our greatest artistic glory. Our royal family is German, our language a bizarre confection of Latin, Saxon and, latterly, Indian and American. Our shops and banks were created by Jews. We did not stand alone against Hitler; the empire stood beside us. And our food is, of course, anything but British . . . Winder has a thousand stories to tell and he tells them well’Sunday Times

Enlightened and illuminating. Winder goes a long way towards defining what we are as a nation―Independent

He has a good eye for the telling anecdote. There is so much to intrigue and delight―Spectator

Totally absorbing and revelatory . . . could not be more timely―Daily Mail

Robert Winder was literary editor of the Independent for five years and deputy editor of Granta magazine. He has written three novels, his most recent being The Final Act of Mr Shakespeare

Diverse Oxfordshire: the county and its people: Malcolm Graham 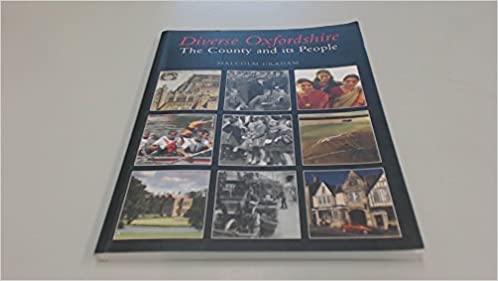 Malcolm Graham read History at Nottingham University before obtaining an M.A. in English Local History in 1970 and a PhD from Leicester University in 1985; his thesis was on the development of Oxford’s Victorian suburbs. He has published extensively on Oxford and Oxfordshire and was elected a Fellow of the Society of Antiquaries in 1999. He came to Oxford in 1970 as the city’s first full-time local-studies librarian and took on the same role for the county in 1974. Between 1991 and 2008, he was Head of Oxfordshire Studies with Oxfordshire County Council. His books include Images of Victorian Oxford (1992), Oxfordshire at War (1994), Diverse Oxfordshire (2010) and Oxford in the Great War (2014).

Mary Seacole was in London in 1854 when she heard about a shortage of nurses on the frontlines of the Crimean War. The Jamaican nurse offered her services but was turned away. Some contention remains about whether Seacole was rejected because she was a mixed-race woman or because she did not apply properly, but Seacole regardless navigated her own way to the battlefield. After opening a hotel and caring for soldiers near what is today Kadikoi, Ukraine, Seacole wrote a best-selling autobiography about her experiences travelling the world.

On its face, the story of a Jamaican nurse stepping forward to try and fill a need in the United Kingdom’s healthcare system seems like a relic of the colonial era. But fifty-five years after Jamaica gained its independence, Jamaican nurses are still heading to the United Kingdom. Unlike Mrs. Seacole, they are not being turned away. On the contrary, they are being given job offers that they cannot refuse.

The Caribbean Community and Common Market estimates that between 1996 and 2006, 50,000 nurses left Jamaica to work in other countries. This migration resulted in a loss for Jamaica of $2.2 million dollars in nurse training expenses. According to Janet Coore-Farr, head of the Nurses Association of Jamaica, Jamaica lost around one fifth of its specialized nurses in 2016 alone. The chairman of the University Hospital of the West Indies reports that around half of specialized nurses trained by the hospital are recruited by foreign organizations before they even graduate.

The nursing shortage has had dire consequences for the Jamaican healthcare system. Reports of short-staffed hospitals cancelling surgeries due to a lack of specialized nursing staff appear frequently in Jamaican newspapers. The impacts of the nursing shortage are not limited to any one sector of the healthcare system. According to a UN Development Programme report on Jamaica’s ability to meet the Millennium Development Goals, nursing shortages have adversely impacted Jamaica’s immunization and maternal health clinics. In 2006, the World Health Organization published a report providing evidence of a correlation between density of healthcare workers and population health outcomes.

Decades of nursing migration have caused a sizeable decline in nurses relative to Jamaica’s population. According to the World Bank, Jamaica had 1.65 nurses and midwives per 1,000 people in 2003. By 2008, that number had decreased to 1.08. For comparison, the World Bank listed the average number of nurses and midwives for OECD nations at 7.7 per 1,000 population in 2012. Meanwhile, the demand for nurses in Jamaica is expected to grow as the population ages. The World Bank estimates that the English-speaking Caribbean will need 10,700 more nurses by the year 2025. Nurses are a key component of any healthcare system, and a shortage of this magnitude could leave the nation unprepared to handle disease outbreaks and other public health emergencies. But nurses are also a key component of Jamaican society, often serving on the frontlines of public health provision and education in their communities. Without an adequate number of nurses, these communities will suffer.

At its core, Jamaica’s nursing shortage is the product of decades of nursing shortages in the developed world. A rising demand for nurses, due in part to increasingly complex needs of an aging population, has been coupled with a decreasing supply of qualified nurses in many countries. A 2007 study of nurses in the American Midwest region found that 38% of surveyed nurses reported feeling problematic burnout associated with their jobs. Young nurses are even more likely to experience burnout, with almost 44% of nurses under the age of 30 reporting the same level of burnout. The stressful nature of the nursing profession has been compounded by staff shortages, driving more nurses away from nursing. Ironically, the nursing shortage also been exacerbated by a shortage of nurses qualified to teach in nursing schools. Over 75,000 qualified applicants are turned away yearly from US nursing schools because of a shortage of qualified faculty.

As nursing shortages ravaged healthcare systems in places like the United Kingdom, United States, and Canada, these countries began working to attract qualified nurses from other countries. In the case of the United Kingdom, the migration of nurses from other parts of the Commonwealth began with the formation of the National Health Service. A BBC documentary drawing attention to Britain’s black nurses reports that as staff shortages threatened the nascent NHS, thousands of nurses from Britain’s colonized countries stepped in to fill the need. According to a 2017 report by the British parliament, around 1,700 Jamaican medical staff currently work for the NHS.

TORCH | The Oxford Research Centre in the Humanities

The relationship between Oxford and Empire has recently been the subject of considerable attention, both within and outside the institution, and the intersecting areas of travel and translation are ones in which Oxford has played a particularly prominent role. The University of Oxford was a leading institution for the teaching of Orientalism and Oriental languages, and the training of imperial administrators. It was also instrumental in the development of anthropology as an academic discipline. This close relationship between Oxford and Empire is embodied in the many prominent translators and travellers who have studied and worked here, including William Jones, Edwin Arnold, Max Müller, T.E. Lawrence, Gertrude Bell, and Amitav Ghosh.

This series will bring together researchers in Oxford and elsewhere to foster interdisciplinary communication and a more consolidated examination of Oxford’s imperial legacies. It will therefore include a diversity of scholars and students who are working in this area in different disciplines and fields.

Siobhan Daly is currently a student on the MSt in Literature and Arts at the University of Oxford. She has an MA from King’s College London and the Royal Academy of Dramatic Arts in Text and Performance, as well as a BA (Hons) in English and History from Goldsmiths College, University of London. She has an interest in post-colonialism and Oxford’s influence on Empire.

Junie James, Jamaican by birth, is founder member and currently Director of ACKHI (African & African Caribbean Kultural Heritage Initiative). She is passionate about Afrikan history and the issue of reparations and the legacy and impact of enslavement on people of Black Afrikan heritage.

Malcolm Graham read History at Nottingham University before obtaining an M.A. in English Local History in 1970 and a PhD from Leicester University in 1985; his thesis was on the development of Oxford’s Victorian suburbs. He has published extensively on Oxford and Oxfordshire and was elected a Fellow of the Society of Antiquaries in 1999. He came to Oxford in 1970 as the city’s first full-time local-studies librarian and took on the same role for the county in 1974. Between 1991 and 2008, he was Head of Oxfordshire Studies with Oxfordshire County Council. His books include Images of Victorian Oxford (1992), Oxfordshire at War (1994), Diverse Oxfordshire (2010) and Oxford in the Great War (2014).

This history presents photos, paintings, and prints, along with text that incorporates descriptions of the city by contemporary citizens, members of the university, visitors, poets, and novelists. A portrait of Victorian Oxford emerges: a city still whispering of the Middle Ages but beginning a modern transformation. 10×9.5″ Annotation copyright Book News, Inc. Portland, Or.

Rising sea levels are not only threatening. They’re expensive, too. Ocean City, New Jersey, is paying costs in money and disruptions to everyday life. (Feb. 17)

“To know that Trump knew at that moment, and he still doubled down says everything. It is appalling,” says fmr. Pence aide Olivia Troye on Trump riling up the mob after learning that the vice president was being evacuated on January 6th. Aired on 02/11/2021.

Rachel Maddow highlights Republicans who voted to acquit Donald Trump of inciting his mob of followers to attack the Capitol, but then went on to decry Trump’s guilt and the need for someone else to hold him accountable. Aired on 02/16/2021.

Rep. Bennie Thompson, D-Miss., has filed a lawsuit with the NAACP against former President Trump and Rudy Giuliani for their role in inciting the Capitol riot. “In America we settle our differences at the ballot box,” he said, stressing how he believes the former president’s refusal to accept election results played a factor in the riot. Aired on 02/16/2021.