Having your own energy sources is an important weapon in the world economy. Since 2013, the United States has made important foes of fossil-rich opponents like Saudi Arabia important in extracting shale gas and shale oil from its own soil. The price for a barrel of crude oil fell from 100 to less than $50. The Texan shale producers who survived this price tag are the new heroes of the United States. Under president Donald Trump, the shale cowboys are striving to help Europe to become independent. On research in Trumpland.

Original title: Schaliecowboys
Schale stone was considered worthless by the oil and gas industry in the past. They passed through on their way to expensive oil and gas that lay deeper. Until a small Texan gas company found a way in the late 1990’s to win gas from hard-shelled rock. By making deep boreholes in the stone layers of the soil and injecting a large amount of water and chemicals under high pressure, shale gas and shale oil are won. With this method, later known as fracking, the energy market changed forever.

In the meantime, one third of gas and oil production in the United States is a shale.And the bid consumer of energy is not only content to be independent, the country is now even an exporter of energy. OPEC, the organization of (other) oil exporting countries, keeps the oil price on the world market as low as possible, to make American production worthless. But for the moment, the oil countries do not get the shale cowboys on their knees.

How does this controversial innovation put the world of energy upside down? Because this new offer of cheap energy really gives us more time to bridge the transition to a sustainable world of solar and wind energy. A few years ago, all experts and analysts went out of the Peak Oil Theory. Namely, the fossil reserves in the world were running out. The shale revolution turned this theory into old dirt in just a few years. Fracking technology opens a whole new reservoir of fossil fuels.

The election of President Trump was greeted in Texas with joy and also seen as a recognition for what the shale revolution is going to be. And the future is even more rosy: recent geological research showed that hundreds of billions of dollars of shale oil are still in the so-called Wolf Camp Shale Field in West Texas. Who are the people behind this shale revolution? A portrait of the pioneers and the new Shale millionaires in Texas. 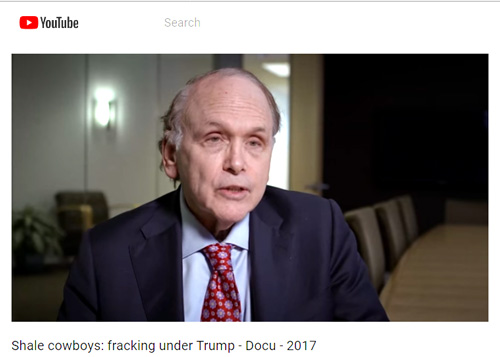