Mayors, governors and business leaders from across the United States reaffirm their support for America’s Pledge to meet the Paris Agreement on climate change, with or without leadership from Washington. https://www.americaspledgeonclimate.com/

Mayors, governors and business leaders from across the United States reaffirm their support for America’s Pledge to meet the Paris Agreement on climate change, with or without leadership from Washington. https://www.americaspledgeonclimate.com/

NEW YORK, NY – Today, Michael R. Bloomberg, the United Nations Secretary-General’s Special Envoy for Climate Action, announced a contribution to support the operations of the UN Climate Change Secretariat, including its work to help countries implement their commitments under the 2015 Paris Agreement. The contribution realizes Bloomberg’s promise from June 2017 to fill a significant funding gap that comes as a result of President Donald Trump’s intention to withdraw from the Paris Agreement and proposed steep budget cuts for international programs, including those on climate.

Bloomberg’s contribution of $4.5 million provides the UN Climate Change Secretariat with sixty percent of the anticipated U.S. government support this year. On March 23, the U.S. Congress passed an omnibus spending bill for fiscal year 2018, allocating $3 million to the UN agency, down from approximately $7.5 million provided annually in prior years. Bloomberg will make additional funds available to the UN Climate Change Secretariat should the U.S. government continue to fail to pay its share of the UN climate budget in 2019. Bloomberg Philanthropies’ funding will strengthen the UN Climate Change Secretariat’s capacity to support developing countries, carry out strategic outreach to promote climate action among stakeholders such as cities, regions, business and civil society, and address institutional needs in areas such as information technology and communications.

Following President Donald Trump’s announced withdrawal from the Paris Agreement and proposed funding cuts for domestic and international climate programs, Mike Bloomberg launched the “We Are Still In” declaration and created America’s Pledge on climate change with California Governor Jerry Brown in the summer of 2017. These efforts aim to demonstrate that the U.S. can meet its pledge under the Paris Agreement regardless of federal inaction, while spurring additional climate and clean energy commitments from U.S. cities, states, businesses and other “non-federal actors.”

Michael R. Bloomberg, UN Secretary-General’s Special Envoy for Climate Action, founder of Bloomberg LP and Bloomberg Philanthropies, and three-term mayor of New York City, said, “The U.S. pledged to work with the rest of the world to fight climate change under the Paris Agreement, and that includes providing our fair share of the funding to help countries reach their goals. Our foundation will uphold our promise to cover any cuts to UN climate funding by the Federal government – and the American people will uphold our end of the Paris Agreement, with or without Washington.”

Patricia Espinosa, the Executive Secretary of the UN Climate Change Secretariat, said, “When countries adopted the historic Paris Agreement to limit global temperature rise, they also recognized that achieving that goal would take broad-based global climate action in all sectors, public and private. I welcome this generous contribution from Bloomberg Philanthropies as an important, practical recognition of our need to work together, and to step up our response to climate change.”

Bloomberg also provided the majority of funding for the U.S. Climate Action pavilion in Bonn, Germany at COP23 when the federal government failed to provide the traditional exhibition space for American climate leadership. At COP 23, Bloomberg and Governor Brown launched the phase 1 America’s Pledge report – a footprint analysis of GHG emissions in the United States – and formally submitted it to the UN in place of the federal NDC. They plan to release the phase 2 later this year and formally submit it, as well

From 2014 to 2016, Bloomberg Philanthropies supported the UN Climate Change Secretariat – the climate negotiating body of the UN – for its work with cities, states and businesses. Bloomberg Philanthropies’ funding to the UN Climate Change Secretariat will cover costs associated with international climate negotiations formerly paid for by the U.S. government, including financing the participation of delegations from the world’s least developed countries at COP 24, this year’s climate conference to be held in Katowice, Poland.

To learn more about America’s Pledge please visit www.americaspledge.com or watch this video.

Only the Super-Rich Can Save Us!: Ralph Nader 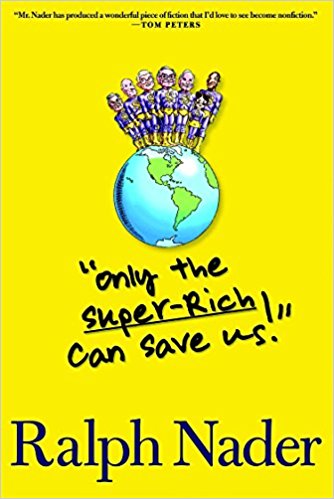 “In the cozy den of the large but modest house in Omaha where he has lived since he started on his first billion, Warren Buffett watched the horrors of Hurricane Katrina unfold on television in early September 2005. . . . On the fourth day, he beheld in disbelief the paralysis of local, state, and federal authorities unable to commence basic operations of rescue and sustenance, not just in New Orleans, but in towns and villages all along the Gulf Coast. . . He knew exactly what he had to do. . .”

So begins the vivid fictional account by political activist and bestselling author Ralph Nader that answers the question, “What if?” What if a cadre of superrich individuals tried to become a driving force in America to organize and institutionalize the interests of the citizens of this troubled nation? What if some of America’s most powerful individuals decided it was time to fix our government and return the power to the people? What if they focused their power on unionizing Wal-Mart? What if a national political party were formed with the sole purpose of advancing clean elections? What if these seventeen superrich individuals decided to galvanize a movement for alternative forms of energy that will effectively clean up the environment? What if together they took on corporate goliaths and Congress to provide the necessities of life and advance the solutions so long left on the shelf by an avaricious oligarchy? What could happen?

This extraordinary story, written by the author who knows the most about citizen action, returns us to the literature of American social movements—to Edward Bellamy, to Upton Sinclair, to John Steinbeck, to Stephen Crane—reminding us in the process that changing the body politic of America starts with imagination.

How Clean Is Our Air? | On Point

Two big reports on air pollution. One looks at the world and the other zeroes in on California. We’ll look at the big takeaways, and more.

On the global picture of our air

Greenbaum: “When you look at what the levels of air pollution are in every country across the world and where the people are… you see that 95 percent of the population of the earth is living in places with air above those safe standards.

There’s extensive evidence that air pollution can affect both respiratory health, it can exacerbate asthma, but of more concern is it can really exacerbate and cause premature death from things like stroke, heart attack, and even lung cancer.”

Greenbaum: “There is improvement. What we see is that as countries improve their economic status, more and more of the households shift to cleaner and cleaner fuels. They might shift to LPG (Liquefied petroleum gas) eventually they might shift to electricity. So we are seeing an improvement, but it still means there is something like 800,000 people dying prematurely from indoor air in India.”

“We do still have far too many people who live in areas that literally can shorten their life, where the air quality is a health risk and even a life risk.”

And former San Francisco 49ers quarterback Colin Kaepernick has accepted Amnesty International’s highest prize, the Ambassador of Conscience Award. In 2016, Kaepernick sparked a movement against racism and police brutality at sporting events across the U.S. by refusing to stand for the playing of the national anthem ahead of NFL games. This is Colin Kaepernick speaking Saturday night at an Amnesty awards ceremony in Amsterdam.

Colin Kaepernick: “It was James Baldwin who said, ‘To be black in America and to be relatively conscious is to be in a rage almost all the time.’ My question is: Why aren’t all people? How can you stand for the national anthem of a nation that preaches and propagates freedom and justice for all, that is so unjust to so many of the people living there? How can you not be in a rage when you know that you are always at risk of death in the streets or enslavement in the prison system? How can you willingly be blind to the truth of systemic racialized injustice?” 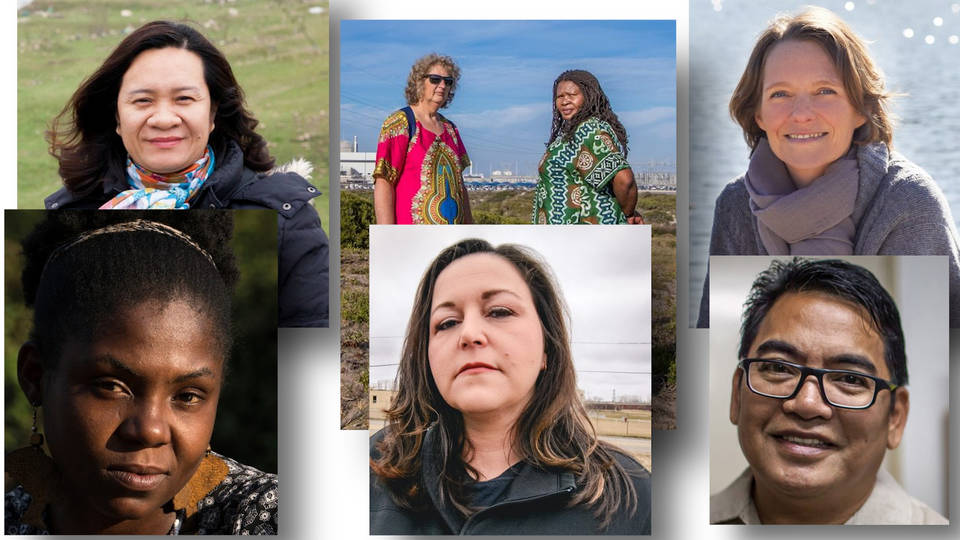 The winners of the 2018 prestigious Goldman Environmental Prize have been announced, with women claiming five of the six prizes. Among this year’s winners are anti-nuclear activists Liz McDaid and Makoma Lekalakala, who led a successful campaign against South Africa’s bid to purchase as many as 10 nuclear power plants from Russia. In Latin America, Francia Márquez wins a prize for her campaign against illegal mining in the Amazon, which led Colombia’s government to crack down on cyanide and mercury pollution. And in the U.S., LeeAnne Walters wins a Goldman Prize for uncovering the crisis of toxic lead in Flint, Michigan’s water supply, after she commissioned a test of her home’s tap water and found it was so contaminated it qualified as hazardous waste.

HSBC Pledges to Roll Back Financing of Fossil Fuel Projects

In a major victory for environmentalists, banking giant HSBC said Friday it will no longer finance the development of tar sands oil extraction, most coal fired power plants, and oil and gas drilling in the Arctic. HSBC says its new policy, which will also end financing to hydroelectric and nuclear power projects that don’t meet certain requirements, is targeted at helping keep greenhouse gas emissions below targets set in the landmark 2015 Paris climate accord. In a statement, the Sierra Club’s Kelly Martin welcomed the policy, calling it “yet another signal to Donald Trump and the rest of the world that, despite their worst laid plans, the era of fossil fuels is coming to a close.” 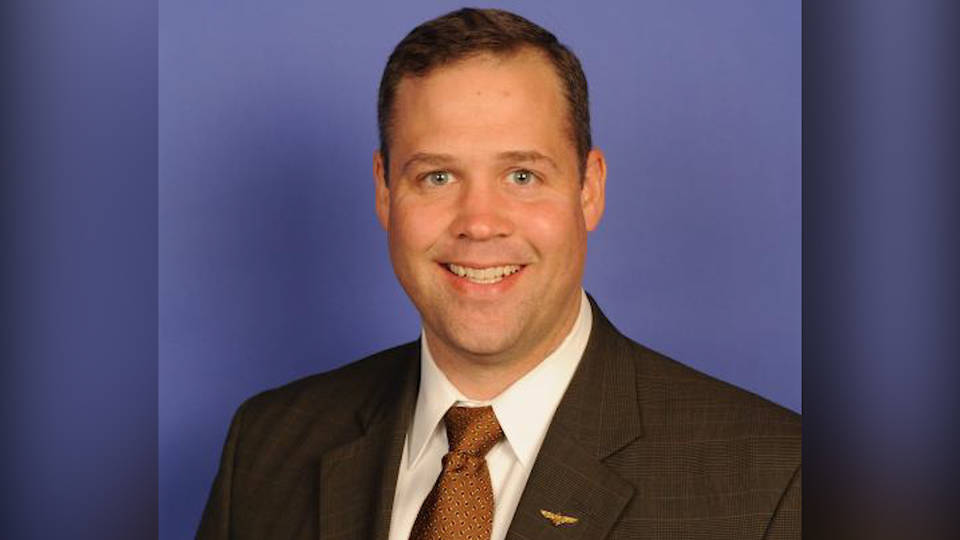 A climate change denier with no scientific credentials is set to helm NASA, after he was narrowly confirmed by the Senate in a 50-49 vote. Oklahoma Republican Congressmember Jim Bridenstine previously demanded President Obama apologize for funding climate change research, and said falsely from the House floor that global temperatures stopped rising early this century. Bridenstine will now oversee an agency whose Earth Sciences Division is responsible for much of the satellite data used to investigate how human activity is driving global warming. 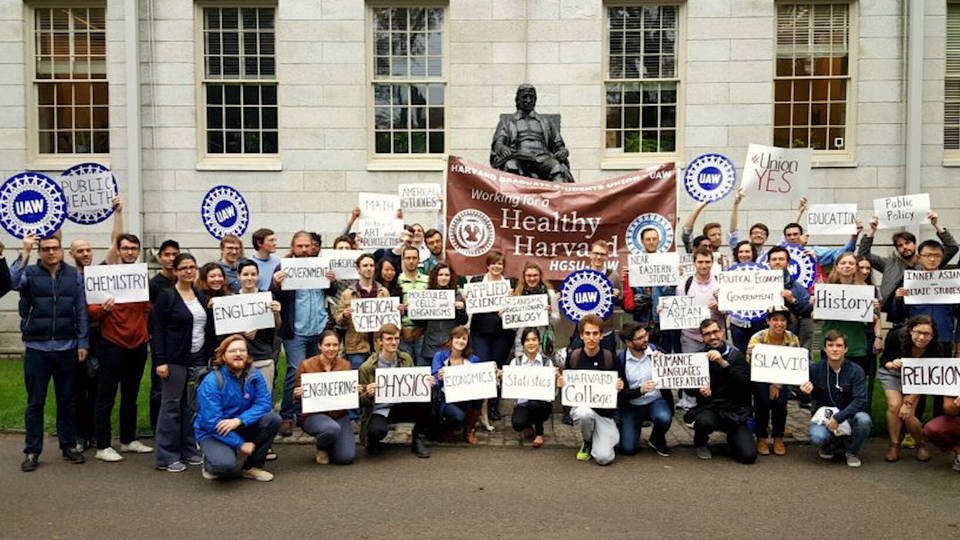 In Massachusetts, thousands of graduate students and undergraduate teaching assistants at Harvard University have voted to unionize. Harvard’s student newspaper reported that a Harvard representative repeatedly declined to answer whether administrators will now recognize the Harvard Graduate Students Union, a chapter of the United Automobile Workers, the UAW. 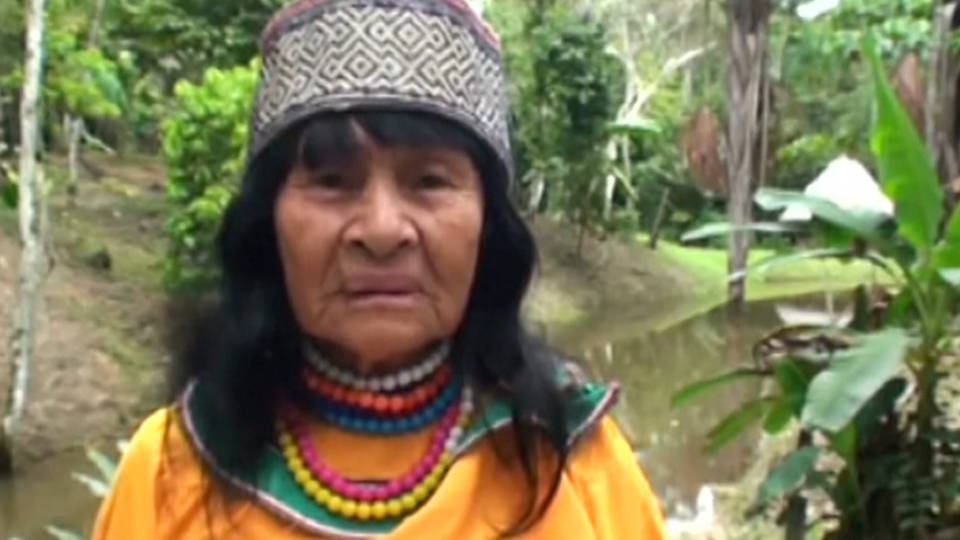 In Peru, mourners paid their last respects Saturday to 81-year-old Olivia Arévalo Lomas, an indigenous rainforest protector who was found murdered in her ancestral home in the Amazon. Arévalo Lomas was a traditional healer, a leader in her community and an indigenous rights activist. On Thursday, she was shot twice by an unknown gunman who fled on a motorcycle. On Friday, an angry mob surrounded 41-year-old Sebastian Woodroffe, a Canadian man they blamed for Arévalo Lomas’s death, before dragging him away and lynching him. Police say they’re looking into whether Woodroffe had anything to do with Arévalo Lomas’s killing, and are investigating both murders.