Flexing cyberwarfare muscle, Russia shows it can cause major disruptions

The Trump administration has accused Russia of a series of cyberattacks on American and European power plants, water facilities and electrical grids, dating back to 2015. Why target a country’s infrastructure? And what are the risks of such acts of cyberwarfare? John Yang talks to David Kennedy of TrustedSec.

The Climate Change Advisory Task Force has completed its task of identifying potential future climate change impacts to Miami-Dade County, and has submitted various recommendations to the Board of County Commissioners. Please visit the County’s GreenPrint website for the implementation of these recommendations.

If you have any further questions regarding climate change, please call 305-375-5593.

In July, 2006, the Board of County Commissioners established the Miami-Dade County Climate Change Advisory Task Force (CCATF), through the adoption of Ordinance 06-113 sponsored. This unanimous action by the Board further cemented Miami-Dade County’s commitment to continuing its greenhouse gas reduction efforts and established the County as a leader in climate change adaptation planning.

Seven CCATF committees/subcommittees were established to focus on specific areas of climate change mitigation and adaptation. In addition to the appointed members, various County and municipal liaisons and representatives from numerous universities, local businesses and environmental and regional organizations participated in CCATF meetings and associated committee meetings.

Paul Kirshen examines the threat of rising sea levels brought about by climate change, and discusses how serious the threat is. An internationally recognized expert in integrated water resources management, he has developed detailed models mapping the impact of sea level rise on coastal communities in New England, Florida, and California. Kirshen has been conducting research on climate change since 1988 and leads an initiative to develop a climate change adaptation practice that will address the multidimensional impacts of climate change. This talk is part of Cambridge Forum’s After Copenhagen: Global Climate Change Conference, recorded by Steve MacAusland.

Video used as a walk through for the application built for the ESRI Climate Challenge.

Sea level rise is threatening Cape Cod’s coastline, but the impacts are not always visible. Funded by the Massachusetts Environmental Trust, the Association to Preserve Cape Cod teamed up with the US Geological Survey and the Cape Cod Commission to map and model how rising seas are causing groundwater to rise under our feet. As USGS Hydrologist Peter Weiskel puts it, this could be called “an inundation from below” study.

Bob Oldale, a homeowner in New Silver Beach, North Falmouth, explains what happened to his neighborhood when groundwater level became too high after Hurricane Bob: three septic systems and a sewer installation later, he warns that we need to adapt to ever-changing water levels, before it’s too late.

Bob’s story is rounded out by comments from George Heufelder, the director of the Barnstable County Department of Health and the Environment, on the public health risk of septic systems and sewer lines that are too close to groundwater. Laurel Schaider, a research scientist with the Silent Spring Institute, talks about her study of pharmaceuticals and other unregulated contaminants in wastewater, and how they’re getting from septic systems and into drinking water.

APCC Director Ed DeWitt, follows up with a call to action: we need to stem the rising tides by reducing our carbon footprint, and mitigating its inevitable effects of sea level rise by protecting our vulnerable coastline.

Who Will Tell The People: The Betrayal Of American Democracy – Kindle edition by William Greider 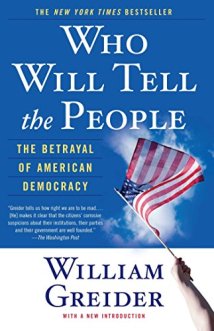 Who Will Tell the People is a passionate, eye-opening challenge to American democracy. Here is a tough-minded exploration of why we’re in trouble, starting with the basic issues of who gets heard, who gets ignored, and why. Greider shows us the realities of power in Washington today, uncovering the hidden relationships that link politicians with corporations and the rich, and that subvert the needs of ordinary citizens.

How do we put meaning back into public life? Greider shares the stories of some citizens who have managed to crack Washington’s “Grand Bazaar” of influence peddling as he reveals the structures designed to thwart them. Without naiveté or cynicism, Greider shows us how the system can still be made to work for the people, and delineates the lines of battle in the struggle to save democracy. By showing us the reality of how the political decisions that shape our lives are made, William Greider explains how we can begin to take control once more.