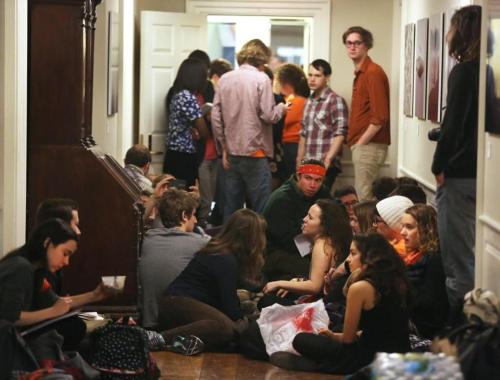 Harvard students staged a sit-in in February at Massachusetts Hall to protest the school’s decision not to divest from fossil fuels.

To understand why prominent Harvard alumni are joining students to demand their alma mater divest its fossil fuel stock, consider how the university has behaved.

Here was the scene last fall. In New York, 400,000 climate protesters marched down 6th Avenue, the largest demonstration about any issue in the United States in years. Also, the World Council of Churches, representing 580 million Christians, announced plans to divest its fossil fuel holdings. Then members of the Rockefeller family — the first family of fossil fuel — took the same step.

And in Cambridge? After huge majorities of Harvard students asked for divestment, and after a letter signed by much of the faculty backed the request, the Harvard Corporation septupled its direct investments in fossil fuels. Most of Harvard’s investments are secret, but in the relatively small portion of its portfolio that it discloses, it increased by a factor of seven its investment during the third quarter of 2014. Talk about sending a message.

The biggest of those new investments illustrates everything that’s wrong with Harvard’s stance, and helps make it clear why prominent alumni from Cornell West to Bevis Longstreth (two-time Reagan appointee to the SEC) to Natalie Portman have called for sit-ins in Harvard Yard later this month. According to an investigation by Chloe Maxmin, a student co-founder of DivestHarvard, the university plunked down $57.4 million for a stake in Anadarko Petroleum, one of the country’s biggest independent oil and gas exploration firms. Anadarko not only played a cameo role in the Deepwater Horizon tragedy, but also just paid the federal government $5 billion to settle the “largest environmental contamination case in American history.”