Pope Francis: The Cry of the Earth by Bill McKibben 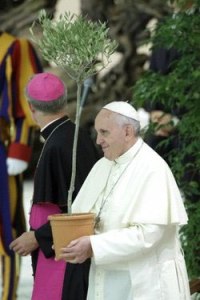 The old conceit that the president has a “bully pulpit” needs updating; it’s clear that the pulpit at St. Peter’s Basilica is now the bulliest of all. Pope Francis may lack legions, but he has 6.3 million followers on Twitter, and for a week now the world has been following leaks of his new encyclical on climate change and the environment.

Laudato Si’, finally released Thursday morning in Rome, is a remarkable 183-page document, incredibly rich—it’s not dense, but it is studded with aphorisms and insights. It will take time to fully digest it, but a few things are immediately evident.

First, simply by writing it, the pope—the single most prominent person on the planet, and of all celebrities and leaders the most skilled at using gesture to communicate—has managed to get across the crucial point: our environmental peril, and in particular, climate change, is the most pressing issue of our time. We face, he says, “desolation,” and we must turn as fast as we can away from coal, oil, and gas. Most thinking people knew this already, but since dealing with global warming would mean standing up to the most powerful forces in the status quo, most world leaders have never fully engaged the question. (President Obama, for instance, the earth’s most powerful politician, made it to the closing days of his 2012 reelection campaign without mentioning climate change—until Hurricane Sandy finally made it impossible not to.) It’s been a side issue, but no more: Francis has made it clear that nothing can be more important.

A blessing to slow climate change 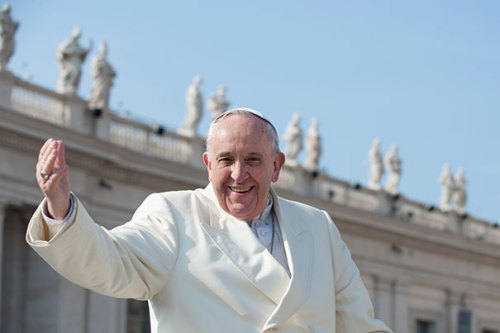 During his two years leading the Roman Catholic Church, Pope Francis has washed the feet of inmates, proposed larger roles for women in the church, and famously shifted the institutional tone toward gay acceptance, saying, “If someone is gay and he searches for the Lord and has good will, who am I to judge?”

On Thursday he again displayed his activist side by delivering a papal encyclical, a formal letter to the world’s Catholic community, titled “Laudato Si” or “Praise Be to You,” which addressed issues involving climate change and the poor. In the nearly 200-page document, the pope ― who has a master’s degree in chemistry ― discussed how the effects of global warming disproportionately harm the poor, backed the science outlining climate change, and called for worldwide action to stop global warming.

Responding to the encyclical, Harvard President Drew Faust said, “Climate change is among the most dire and devastating threats confronting people and the planet today. It was clear from the time he chose to be named after St. Francis of Assisi that Pope Francis would demonstrate a powerful reverence for all living things, and deep compassion for the most disadvantaged among us. In showing how climate change is both a threat to the planet and to impoverished peoples across the globe, Pope Francis’ encyclical highlights climate change as one of the most urgent social justice issues of our time.”

To better understand the issues in play, the Gazette spoke with three Harvard scholars about the papal encyclical, its policy implications, and its likely impact on both the church and the international debate on climate change.

GAZETTE: What is an encyclical, and how important are they?

FIORENZA: It’s a letter that the pope writes to the whole church that has penultimate authority. The highest authority is when the church defines something as doctrine. This is not quite at that level, but it is sort of the highest teaching that the pope can give that has to be taken seriously, with a considerable amount of respect. In that sense, it’s really very important, and it’s been a priority for Pope Francis, who had announced, almost from the day he was chosen, that he would write an encyclical on the environment.

GAZETTE: Is there a history of the Vatican making statements on climate change?

FIORENZA: Your question points to why I am a little bit puzzled by the reaction of certain Roman Catholic politicians. Pope Paul VI discussed the ecological concern as a tragic consequence of human activity in an encyclical from the 1970s. The first encyclical of John Paul II warned that humans saw no meaning in the environment except for its immediate use and consumption. Pope Benedict XVI also addressed the environment. What is overlooked is that the American bishops on June 15, 2001, issued a document voted on by the whole conference of bishops titled “Global Climate Change: A Plea for Dialogue, Prudence, and the Common Good.” In it they underscored the responsibility to address global warming, the role that the human use of fossil fuels has had, and the disproportionate impact global warming has had on the poor. I am kind of surprised that people think what Francis is doing is new.

GAZETTE: Is there anything really new in this document?

FIORENZA: Yes and no. The basic moral and religious imperative is the same. He is really saying the environment is a moral and religious issue. He’s not saying you can consider it just a purely economic or political issue [so] that the pope has nothing to say about it. What’s different is the starkness of his description of the environment: He goes into detail on the increased pollution, the scarcity of water, the loss of biodiversity, the decline in the quality of human life. And he also says that the very causes of these effects are the causes that are leading to a breakdown in human society and global inequality. That is perhaps much stronger than in the other encyclicals from other popes. He also criticizes at length an excessive confidence in technology alone and says what is needed is global dialogue and international cooperation. But he balances this global emphasis with what he calls a notion of “cultural ecology.” He is saying globalization is threatening not only the environment but also local cultures, and that we must preserve the earth and those cultures for the future.