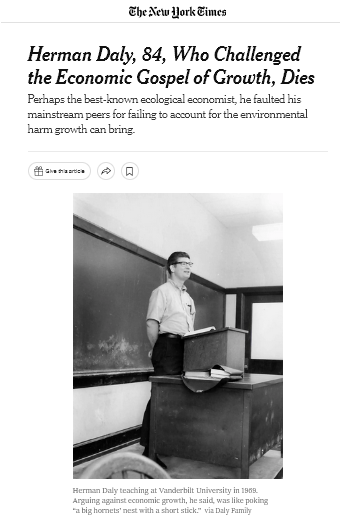 Herman Daly teaching at Vanderbilt University in 1969. Arguing against economic growth, he said, was like poking “a big hornets’ nest with a short stick.”Credit…via Daly Family

Perhaps the best-known ecological economist, he faulted his mainstream peers for failing to account for the environmental harm growth can bring.

Herman Daly, who for more than 50 years argued that the economic gospel of growth as synonymous with prosperity and progress was fundamentally, and dangerously, flawed because it ignored its associated costs, especially the depletion of natural resources and the pollution it engenders, died on Oct. 28 in Richmond, Va. He was 84.

The death, at a hospital, was caused by a brain hemorrhage, his daughter Karen Daly Junker said.

Dr. Daly, an ecological economist, was almost surely his field’s chief popularizer through his more than a dozen books and many journal articles, his faculty positions at the University of Maryland and, earlier, Louisiana State University, and his somewhat incongruous six-year stint at the World Bank.

Although he was branded a heretic for his theories — or, worse, ignored — among traditional economists, he had plenty of adherents, who saw him as prophetic for anticipating climate change’s increasingly harmful impact and the vast sums of money needed to address it.

“His ideas are really relevant now, unlike most other economists, whose ideas tend to lose relevance as time passes and circumstances change,” Peter A. Victor, an ecological economist and the author of the 2021 biography “Herman Daly’s Economics for a Full World,” said in a phone interview.

One of Dr. Daly’s key principles was that growth is “uneconomic” when its costs outweigh its benefits. That idea was tied to another: Earth, once empty, is now full — of people and what they produce — and charting a more sustainable path requires the use of fewer natural resources and the making of less waste.

“That’s not really hard to understand,” Dr. Daly said in a 2011 video interview with WWF Sweden. “I can explain that to my grandchildren.”

Yet another foundational concept was that the economy does not exist apart from the Earth’s biosphere but within it, and that its scale is limited by its reliance on finite natural resources.

Such propositions might seem simple, but arguing against economic growth, Dr. Daly wrote in a foreword to Mr. Victor’s book, was like poking “a big hornets’ nest with a short stick.”

“It rudely upsets a very large and comfortable consensus,” he added.

He urged politicians, governments and other economists to abandon the relentless pursuit of growth in favor of a so-called steady-state economy, which would achieve a stable balance between supporting human life and preserving the environment. He employed an aircraft metaphor to explain his preferred approach.

“The failure of a growth economy to grow is a disaster,” he told The New York Times Magazine in a profile of him this year. “The success of a steady-state economy not to grow is not a disaster. It’s like the difference between an airplane and a helicopter. An airplane is designed for forward motion. If an airplane has to stand still, it’ll crash. A helicopter is designed to stand still, like a hummingbird.”

He proposed replacing gross domestic product with metrics like an “index of sustainable economic welfare,” which would tally not just the value of goods and services produced but also the ecological harm done in the process. To him, “sustainable growth” was nonsensical; “sustainable development” was the goal.

In an interview, Joshua Farley, an economist and co-author with Dr. Daly of “Ecological Economics: Principles and Applications” (2004), boiled his colleague’s animating philosophy down concisely: “More isn’t always better.”

Dr. Daly’s economic beliefs were grounded in hard sciences like the laws of thermodynamics, but also in ethical ideals, like the fair distribution of wealth, and in his faith as a Methodist who saw the Earth as the handiwork of an almighty creator.

Even as his theories gained currency in recent years, they remained outside economic thinking’s mainstream. He did not seem to mind.

“My duty is to do the best I can and put out some ideas,” he said in The Times Magazine interview. “Whether the seed that I plant is going to grow is not up to me. It’s just up to me to plant it and water it.” 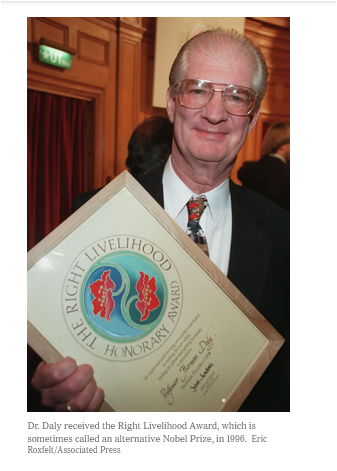 Herman Edward Daly was born on July 2l, l938, in Houston to Edward Joseph Daly, who owned a service station in Beaumont, Texas, where the family lived at the time, and Mildred (Herrmann) Daly, a homemaker who had worked as a bookkeeper before marrying. The family later moved to Houston, where Ed Daly opened a hardware store.