BBC World Service – The Documentary, Going for gold In Ghana 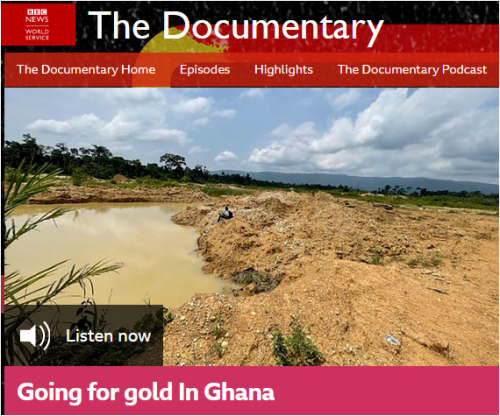 Ghana is Africa’s leading producer of gold. The majority of Ghana’s gold mining operation is legally undertaken by national and global mining corporations but it is estimated that in recent years as much as 35% is produced by small scale miners, much of it illegally. This practice, known as galamsey, is a danger to the miners and the environment around them and it is estimated that up to 60% of Ghanaian bodies of water are polluted as a result. But when job opportunities are not as available as precious minerals, what options do locals really have?

Successive governments have attempted to tackle galamsey in a variety of ways with varying degrees of success. The latest came in July 2021 when Vice President Dr Mahamudu Bawumia announced a new scheme of inclusion and integration that the government hopes will have a positive impact on miners, suppliers and jewellery makers and curb the rise in illegal mining.

Journalist and broadcaster Justice Baidoo investigates whether the measures to legitimise galamsey have so far been successful and, if not, how long the country can sustain an industry that could end up destroying rural communities.