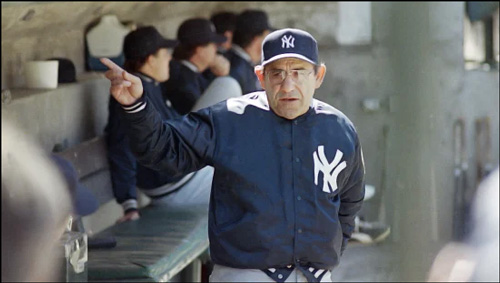 Yogi Berra — the American baseball star — died in 2015 at the age of 90. In addition to his celebrated baseball career, Yogi is fondly remembered for his wit and tersely expressed wisdom. In characterizing those hauntingly familiar and repetitive circumstances we all face in life, he coined a phrase that serves as the perfect encapsulation to describe feelings we all experience: “It’s déjà vu all over again…” 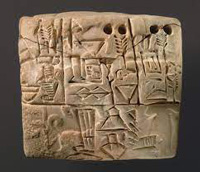 n sad and sardonic moments of personal reflection on the “population problem,” this phrase aptly sums up our current circumstance in trying to address the human/Earth dilemma.  In its more familiar form the “human/land” problem has been at the core of civilization’s discourse about itself over the last five thousand years, ever since the earliest cuneiform tablets began to record human history with the rise and fall of grain-based agricultural empires.

Much of Biblical literature over the last three thousand years is, in essence, a series of mythopoetic narratives reflecting upon the “promised land” that had allegedly been granted by “covenant” to a favored “chosen people.”

In the more recent past it has been the quest for “Lebensraum“ or, in our day, the world’s unimpeded “free market” access to agricultural land and the fruits of its food production in the Ukraine that has seized our attention.  Human’s access to arable land and fresh water and the food that this affords to those who control that access provides the narrative thread for the accounts of the rise and fall of grain-based civilizations. 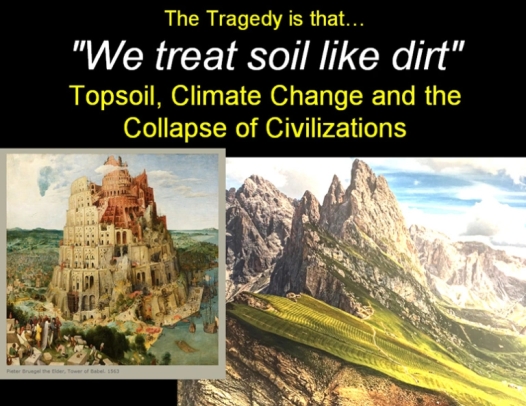 It is hard to escape the conclusion that Yogi Berra was right.  This is “déjà vu all over again…”

We need — each of us — to attempt a “fresh start” in trying to confront problems of this scope and magnitude.  Now it is not just one tragedy after another in widely dispersed locales.  Rather we are facing the global collapse of a world food system that has become hypercoherent in its supply chains and increasingly petro-dependent in both the production processes, the distribution chains and the processing industries that now constitute the world food system.

In this new context we need to step back and re-contextualize our habitual thinking in a larger frame of reference.  Sir David Attenborough aptly re-stated the Malthusian perspective years ago in the last address he gave to the Royal Society in London under the chairmanship of The Duke of Edinburgh.  As he put it, Malthus simply observed in 1798 that that “there cannot be more people on this Earth than can be fed.”   This was true for the entirety of human history before Malthus formulated his ideas in quasi-mathematical terms and nothing has changed since to alter this simple truism.

To begin, then, we now understand that as human beings we live within a planetary ecosystem that we did not create, cannot control and must not destroy. Moreover, it seems that Earth is the only life-supporting planet in the known universe. This is a rudely jolting fact about the precariousness of our place in space, especially because the agricultural practices upon which the whole world now depends are now themselves dominantly based on non-renewable resources.

Yet, even more disturbing is the fact that in spite of all we now know about our vulnerable circumstance and despite our very best intentions, the social, economic and political institutions of our contemporary world are committed to operate – in their ‘default mode’ – so as to destroy the prospects for our future survival within the constraints of Earth’s ecosystem.

The institutions of which we are so proud and like to think we can control have in reality taken control of our behavior as a species. This is particularly troubling because these institutions are founded in law and in practice upon the principle of promoting perpetual growth and continued human expansion.

The trouble is – as ecologists have pointed out long ago – that this growth will not persist for any species in a finite ecosystem. It is a basic law of biological systems that no organism within them can grow without limit without destroying the system itself.

Starkly put, then, the question is simply this: can humans survive the anthropocene? Can we repurpose with sufficient speed our institutions so as to assure human continuity, rather than accelerate our demise? If we fail to redirect them away from their default modes of perpetual growth no amount of technological wizardry will spare us from the system-wide collapse toward which our global agriculture is now headed.

Our problem is compounded by the well nigh universal phenomena of “chronocentrism” — the belief that the “normal” state of the world corresponds to what has existed in “my time” — that is, the time I can remember or the recent past.  This is demonstrably false, but many cultures persist in thinking that they remember a time that was “normal” in human history.

For example, in demographic terms the world’s population has tripled during the lifetime of someone born in the immediate post-World War II period who is still alive today.  For someone born in 1945 or 1946, for instance, the global population has grown from roughly 2.5 billion people in 1945 to roughly 7.5 billion people today.  To those who have lived over this span in Earth history it is quite natural to think of this time span as “normal.”

Yet it is not.  In fact it is a highly exceptional moment in Earth history.  Never before in Earth history had the global population increased three-fold in the life-span of one individual.

Moreover, the total human population will never again triple in the life span of just one individual.  That is to say, it will not continue to expand from its current size of roughly 7.5 billion to over 22 billion in the life-time of someone born today.

So, it turns out, that the post-World War II global population “spurt” in human history was both unprecedented and unrepeatable.   The demographic behavior of our species in this “moment” — this short interval of human history — is unique, non-replicable and abnormal in the long span of human affairs.

This means that what many of us who grew up during this period and became used to the growth dynamic as “normal” are now culturally ill-equipped for what is coming in the decades ahead.   Having grown up on a food supply subsidized heavily by fossil fuels and the “green revolution” we have very little idea of alternate ways of structuring human society, yet we are going to have to devise these means if we expect to survive as a species.

A unique and non-replicable “moment” in human history,
characterized by growth 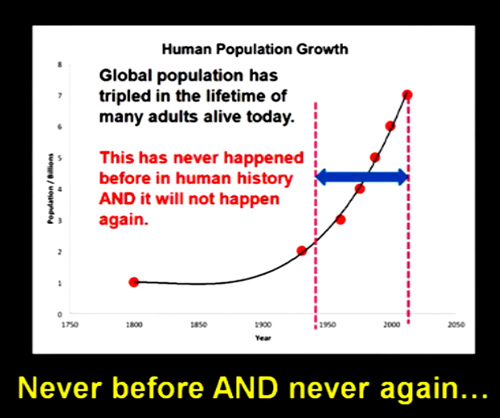 Personally, I have been introduced to both the gravity and enormity of these interrelated crises as the result of encountering and absorbing the insights of seminal writers including the trail-blazing former World Bank economist, Herman Daly, the celebrated physicist, Al Bartlett, the soil scientist, David Montomery, the renowned global thinker, Noam Chomsky, the insightful journalist and essayist, George Monbiot and the writer and inspiring carbon activist, Bill McKibben.  Their collective insights have enabled and empowered a movement of many millions to understand that what we are witnessing now is what Yogi Berra called “déjà vu all over again…”

Despite our much reputed “intelligence” as a species humans appear collectively to behave as what demographers and ecologists call an “r-selected” species in a once biologically rich but now a rapidly deteriorating ecosystem.  The déjà vu before us is the “overshoot and collapse” syndrome described with graphic clarity for decades by biologists, physicists and sociologists: 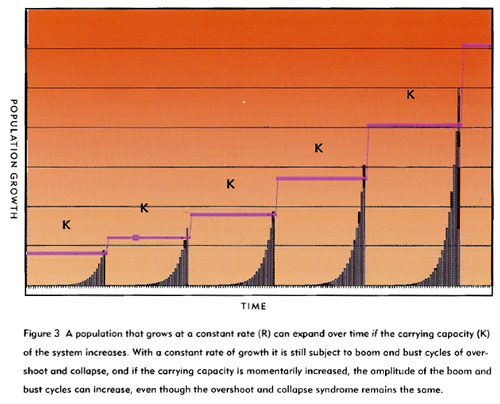 After completing an undergraduate degree at Yale, I received a scholarship to undertake graduate study at Balliol College in Oxford. There I completed two graduate degrees – one in Social Anthropology and the other in Modern History, concentrating upon European colonialism in Africa.  After teaching history and anthropology at Yale and Harvard, I was granted an extended Luce Research Fellowship at Harvard Divinity School to examine environmental ethics and public policy. There I concentrated upon the ecology, ethics and trajectory of modern, petro-intensive agriculture.

Following a further year as part of a research team at the Rockefeller Foundation, I returned to Harvard to found and direct the Harvard Seminar on Environmental Values (HSEV) – the first university-wide inter-faculty initiative designed to expand awareness of environmental ethics at Harvard.

This cumulative work underscored the urgent need for our civilization to limit its growth and focus attention instead upon engineering a transition towards sustainability. The colonial legacy of ‘growth economics’ combined with a tragic and pervasive public misunderstanding of the petro-intensive ‘magic’ of the ‘green revolution’ has meant that modern cultures all over the world are on a collision course with Earth’s finite ecosystem. These interconnected crises are accelerating as the global food system is becoming ever-more dependent upon fossil fuel combustion, while recurrent pandemics impact the world’s poorest agricultural populations with increasing severity, and extreme weather and changes in the climate stress food production and global supply chains beyond the breaking point.

As a vehicle to foster global public awareness, we have created the weblog, Transition Studies, to address the collective human task of devising a just transition towards global sustainability.  Some of this work has been presented in other formats and extended internationally through online publications from other universities. 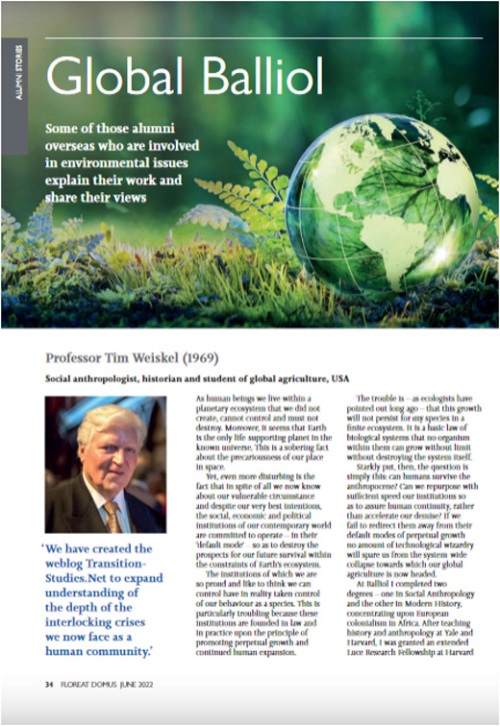 The thrust of this work over more than fifty years has been to underscore that Western European and American culture has fundamentally misunderstood its role in Earth’s complex ecosystem.  Notions of continuous expansion in both populations and economies may have seemed plausible to those trying to interpret their experience from a Euro-centric perspective in the post-Columbian world since 1492, but these concepts are no longer credible.  Indeed, they are downright destructive mythologies.  There is not world enough nor time for the myth of perpetual growth to continue to guide our collective human behavior.

To put it bluntly, as a species we are all — through our dominant social, economic, political and cultural institutions — trying desperately to live with a persistent “frontier mentality” in a post-frontier world.   This will not work because it cannot work.

It is a fundamental law of biology that no population (of any species) can grow infinitely in a finite ecosystem without destroying that ecosystem itself.   As with all other living organisms we cannot survive without the a functioning ecosystem which sustains us.  So, if we are to expect to survive as a species we will need to overhaul and replace the severely dysfunctional anthropocentric myths at the core of our fossil-fueled industrial civilization.