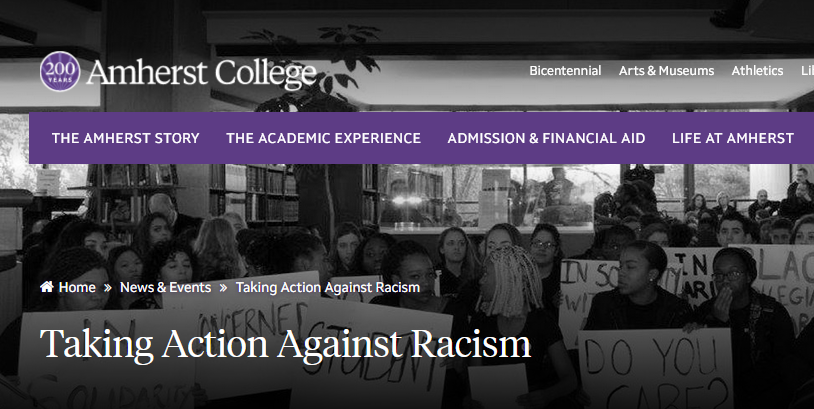 “In truth, there is only one legitimate response to the fact of anti-Black racism and the damage it inflicts. That response is opposition.”

The goal of a liberal arts education is to fight prejudice and ignorance with knowledge and understanding, changing the world for the better. At this pivotal moment in the nation’s history, we have an opportunity to join together to fight systemic racism, racist prejudices, and discrimination.

At Amherst, we are committed to taking action. This website and our Anti-Racism Action Plan are two indications of that commitment. Enacting real and lasting change, however, takes the ongoing efforts of the entire community. Spontaneous statements of anti-racism support that have appeared on many academic departments’ websites are an indication of the widespread support that is necessary to make our Amherst community truly equitable and inclusive.

President Biddy Martin sent an updated plan to the community on October 4, 2021

President’s Colloquium on Race and Racism

Hosted by President Biddy Martin, this series of talks centers the voices of scholars studying intersections of race and American democracy.

Provost Lecture Series: The History of Anti-Black Racism in America

In this virtual series, four of the nation’s foremost scholars of African American history introduce key issues in legal and political history, exploring the history of anti-Black racism in America.

The Office of Diversity, Equity, and Inclusion supports the growth of a just, equitable, vibrant, and intellectually challenging educational environment, and a culture of engagement.

Read the letter written by Chaka Laguerre ’08 and signed by over 350 alumni, sent on June 10, 2020 to President Biddy Martin and Provost and Dean of the Faculty Catherine Epstein.

October 4, 2021, updates are included throughout the plan; find them below.

1. A Racial History of Amherst.

In ReclaimAmherst, students and alumni write that the College’s founders were slaveowners, among the most vicious racists of their day. Over my nine years as president, I have asked our archivist, Mike Kelly, several times to help me understand Amherst’s relationships to slavery. After quite a bit of examination, Mike does not believe the research supports the claim that the founders were slaveowners. As far as we can find, David Parsons, who is named as a slaveowner in ReclaimAmherst, and who did own slaves, could not be considered a founder. For more information on the founders, please explore the College’s early history collection and a web page of resources on College history. Regardless of whether any founders are discovered to have owned slaves or been directly involved in the slave trade, there is no question that the institution of slavery produced considerable wealth for many white people in the eighteenth and nineteenth centuries, and likely for some with ties to Amherst over the years.

What we need, in my view, is a broad and deep historical study of the College’s ties to slaveholding and the capital accumulation that slavery provided for some, following the lead of other projects such as those initiated at Brown University and the University of Pennsylvania. We will want our study to extend into the present, illuminating the experiences, achievements, and contributions of our Black alumni. We will commission this project with the expectation that interested Amherst faculty, staff, students, and alumni will be involved in the research. The College will make all findings publicly available. I will ask the provost, Catherine Epstein, herself an historian, and our archivist, Mike Kelly, to assume responsibility for organizing the project and establishing a panel of scholars with research expertise in this area.

For the past few months, I have read, listened, and thought deeply about the experiences of racism and violence that Black students and alumni have shared, and which they endured across this country and also at Amherst. I have spoken before about the environment in which I grew up and the racism and violence that were endemic to it. I know how visceral and violent the belief in white supremacy can be. I have seen it first hand. I know how essential it is to many white people’s identities, even when its importance is unconscious and unacknowledged. Given what I have lived and what I have studied, I know there can be no neutrality about the fact of racism and no legitimate debate about the urgency of confronting it. It is time for me as a president, who is also white, to take stronger stands and to enlist the entire Amherst community in bolder efforts to make Amherst a truly equitable and inclusive place. For me, this is a time to transform what I know and what I have known into what I can do and what I can enlist you to do.

This summer has been another object lesson in how racism, particularly anti-Black racism, is woven into the fabric of the country. We have seen videos of the cold-blooded killings of George Floyd by Minneapolis police and Ahmaud Arbery by apparent vigilantes in Georgia. We learned of the fatal shooting of 26-year-old Breonna Taylor by Louisville police in her own home and the shooting of Tony McDade by police in Tallahassee, one of numerous killings of Black trans people. These killings show that a brutally racist past lives on in the present and that every one of us must do all we can to end it. The pandemic has also done its part to make the scourge of systemic racism undeniable, with its disproportionate impact on Black, Latinx, and Indigenous communities.

In this letter, I focus specifically on anti-Black racism, understanding that it has had a distinctive, very long, and deep-seated position and function in the economic, social, political, and moral history of the country. I recognize, too, that racism against Indigenous, Latinx, Muslim, Asian and Asian American people, xenophobia against people of other nationalities, and anti-Semitism are on the rise. These groups also experience the harm of discrimination and violence. The fight for greater justice and more truly democratic institutions has to be fought on all of these fronts, and at the points where they intersect, if the country and its colleges and universities are to make good on their ideals of freedom and equality.

For purposes of this communication, I feel an imperative to be as specific as possible about the impact that anti-Black prejudice and discrimination have on Black students, staff, faculty, and alumni, all the more so for those living at the intersections of other axes of discrimination—gender identity, sexual orientation, socioeconomic status, nationality, ability and accessibility, to name a few. Ensuring the dignity, equity, and inclusion of all Black students requires a more nuanced and comprehensive approach than we have taken.

We will continue to see race and racism used as political tools. We may even hear that there are “good people on both sides“ of white supremacy, as a way of justifying and normalizing racist ideology and acts. In truth, there is only one legitimate response to the fact of anti-Black racism and the damage it inflicts. That response is opposition. And opposition requires that we take more intentional measures. We are a small college community with admirable aspirations and a history of leadership among our peers in educational excellence and in access and affordability. In 2016, the College was awarded the Jack Kent Cooke Prize for Equity in Educational Excellence for efforts to provide forms of support that go beyond financial aid to ensure that students from low-income backgrounds are able not only to succeed, but to thrive. Yet our historically predominantly white college still has a long way to go if we are to realize our promise of racial equity and shared ownership of the culture of the College. Those of us who love Amherst and the purposes of its strong liberal arts education can and should dedicate ourselves to more significant change. This letter ends by outlining some of the actions to which I and my colleagues are committed. With this message, I seek your active involvement and ideas.

Many of our students, alumni, faculty, and staff have already started to respond to the painful events of the summer by being part of the activism that has emerged across the country. They have also directed our attention to what they experience at Amherst. There are critical moments in history when the call for change is resounding. This is one of those moments.

John Lewis’s funeral service last week powerfully reinforced the importance of history, our responsibility to it, and the duties that come with an understanding of it—obligations that are personal, institutional, and national. Congressman Lewis was eulogized for his extraordinary courage, sacrifice, conviction, and activism, but also for his dignity, kindness, and commitment to truth. Lewis was celebrated for the way he comported himself as a human being in the ordinary moments of life as well as when marching across the Edmund Pettus Bridge. The service itself showed how beauty and artistry, music, love of language and rhetoric, mentorship, and critical self-examination combine with activism and legislation to create a better world.

Institutions like Amherst stand for those virtues. The College has articulated the ideals of opportunity, intellectual rigor, equity, community, and contribution to the larger society; Amherst has sought, imperfectly, to hew to those values. We constantly strive and end up seeing more clearly both the failures in our journey and the never-ending challenges ahead. The willingness to see failures and gaps, especially our own, and to acknowledge them is core to our mission and the reason we value critical thinking in the pursuit of truth and democratic ideals.

In the Amherst Anti-Racism Plan, released on 3 August 2020, President Martin noted the need for a historical study of the College’s ties to slaveholding and to capital accumulation based on slavery. In addition, she called for a racial history of the college extending into present times. To coordinate and disseminate research on the college’s racial past, President Martin has formed a Steering Committee on the Racial History of Amherst College.

The primary functions of the Steering Committee will be:

The Steering Committee will be co-chaired by Catherine Epstein, Provost and Dean of the Faculty, and Mike Kelly, Head of the Archives and Special Collections. The committee will include two faculty members, two students, and one representative from each of the following administrative offices: Advancement; the Office of Diversity, Equity, and Inclusion; and the Office of Student Affairs. The committee will also include an external expert. It will be staffed by the Director of Academic Projects. The committee will meet at least twice each semester to carry out its charge.