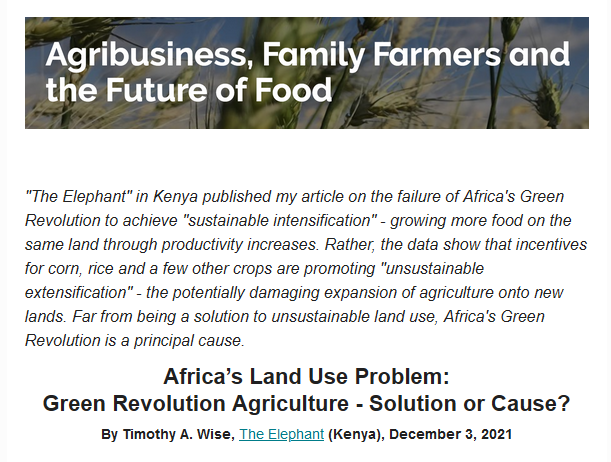 “The Elephant” in Kenya published my article on the failure of Africa’s Green Revolution to achieve “sustainable intensification” – growing more food on the same land through productivity increases. Rather, the data show that incentives for corn, rice and a few other crops are promoting “unsustainable extensification” – the potentially damaging expansion of agriculture onto new lands. Far from being a solution to unsustainable land use, Africa’s Green Revolution is a principal cause.

It is a myth that the only way to increase productivity on existing agricultural lands is through Green Revolution programmes and evidence shows that they are among the principal causes of unsustainable land use.

By all accounts, food and agriculture were barely on the agenda at last month’s U.N. Climate Summit in Glasgow, Scotland. They should have been. Food production, distribution, consumption, and waste contribute an estimated one-third of greenhouse gas emissions. In production the majority comes from unsustainable livestock production with another large share coming from the production and use of synthetic fertilizers. But a significant share also comes from “land-use change,” a neutral term for the destructive expansion of agriculture onto new land.

That sort of “extensification” of agriculture can have serious environmental consequences – deforestation, soil erosion, unsustainable water use, etc. Those in turn have important implications for climate change, as a recent U.N. report highlighted. Land-use changes due to agricultural expansion increase carbon emissions from land clearing, eliminate carbon-dioxide-absorbing plants such as rainforests, and create greenhouse gases with modern farming methods. According to the U.N., they account for about 30% of agriculture-related emissions.

A simplistic neo-Malthusian perspective attributes extensification to growing populations exerting pressure on scarce natural resources. Increasing farmers’ productivity on existing lands in regions such as Africa where yields are relatively low is the mainstream solution. The goal is to foster “sustainable intensification” – growing more food on the same land. With commercial inputs such as commercial seeds and synthetic fertilizers, farmers can intensify their exploitation of existing agricultural land, raising productivity and easing pressures from growing populations to bring new lands into cultivation.

Read the full article at The Elephant….