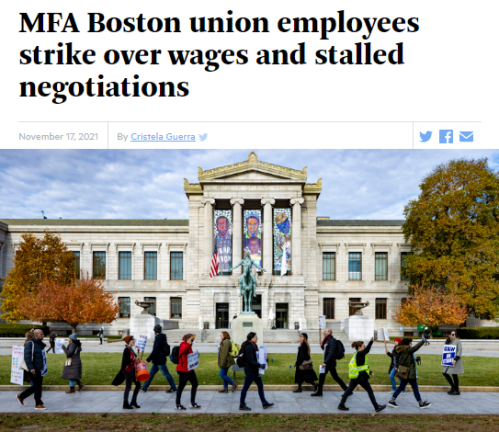 Museum staff and their supporters picket outside of the front entrance of the Museum of Fine Arts on Huntington Avenue demanding livable wages and decent working conditions. (Jesse Costa/WBUR)

A drawing class documented the scene that played out in front of Boston’s Museum of Fine Art Wednesday morning. Instead of capturing nature or scenery, they sketched a long picket line of marching workers, from curators to conservators, library workers to public-facing staff. The student’s drawing instructor, who did not want to give her name, said instead of crossing the picket line to enter the museum, she chose to remain outside with her students to show solidarity.

More than 100 workers marched on a cold morning, bundled in coats, holding signs aloft and chanting, “MFA you’re not good, sign our contract like you should.”

Employees said they want better wages and treatment, and many said they don’t feel seen or heard by museum leadership. They said they cannot afford to live in the city on what they earn. Others said their workload has increased since last year’s layoffs.

The union says workers’ wages have been frozen for the past two years due to the pandemic and that the museum refuses to guarantee wage increases until 2024.(Jesse Costa/WBUR)

“No one wants to sacrifice a day of pay to stand outside in the cold,” said Layla Bermeo, assistant curator of paintings in the art of the Americas department. “So that really indicates that there is a problem with communication with our leadership. We’re here today to support those who need their voices to really be heard in this discussion.”

Over 100 employees voted to unionize at the end of last year, joining United Auto Workers Local 2110. They’ve been in negotiations with museum leadership since March over pay, safety and workplace diversity. A majority of the union voted for the one-day strike after stalled negotiations, according to UAW Local 2110 president Maida Rosenstein. The union has another bargaining session scheduled for Dec. 3, and Rosenstein hopes this action is taken seriously. She said patrons have shown support.

“We want to power through until the museum closes and make as much noise and visibility as we can,” she said. “A lot of people have come over and said they feel terrible and don’t want to go in. A couple of museum members have come out to our picket line. I think visitors are getting the message.”