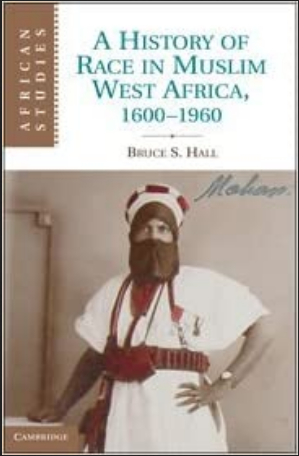 The mobilization of local ideas about racial difference has been important in generating, and intensifying, civil wars that have occurred since the end of colonial rule in all of the countries that straddle the southern edge of the Sahara Desert. From Sudan to Mauritania, the racial categories deployed in contemporary conflicts often hearken back to an older history in which blackness could be equated with slavery and non-blackness with predatory and uncivilized banditry. This book traces the development of arguments about race over a period of more than 350 years in one important place along the southern edge of the Sahara Desert: the Niger Bend in northern Mali. Using Arabic documents held in Timbuktu, as well as local colonial sources in French and oral interviews, Bruce S. Hall reconstructs an African intellectual history of race that long predated colonial conquest, and which has continued to orient inter-African relations ever since.

“Bruce Hall embarked on a great project to understand why racial arguments were so common in West Africa’s political contexts and yet so invisible in history books. His book is an objective and nuanced analysis of race relations. Anyone who wants to know about race relations in West Africa must read this brilliant study.”
Chouki El Hamel, Arizona State University

“In this provocative and audacious challenge to the most influential paradigm of ‘race’ in African studies – Mamdani’s ‘contemporary racism as colonial legacy,’ Bruce Hall posits race as an atemporal language imbued with both deep historical meaning and widespread contemporary exigency. Hall brings to his analysis not only the texts of Islamic scholars, but also the voices and views of local Songhay slave-descendants and farmers. Conceptualized in the context of the present, it draws on an enormous interdisciplinary arsenal of languages, methodologies, and theories to engage with an historical concern that spans time and space – namely when, why, and how do people ‘chose’ racial construction to order their lives? And with what consequences? This is African history at its best because, like the world about which Hall writes, it will take its place in the ongoing dialogue about race that extends well beyond Africa.”
Ann McDougall, University of Alberta

“What makes this work so outstanding is that it is for the larger part based on local Arabic source material, which ensures that the local visions of race and society are indeed local and not inferred through an interpretation of French source material … For many of us, reading this book will mean reconsidering much of what we thought we knew about Islam, history, and society in the Sahel.”
Baz Lecocq, Islamic Africa

Traces the development of African arguments about race over a period of more than 350 years in Mali.