Welcome to the End of the ‘Human Climate Niche’ 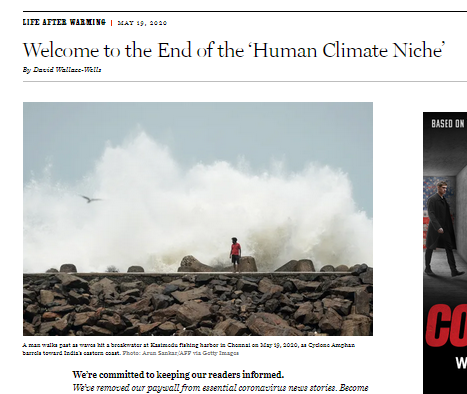 On Wednesday, a “super cyclone,” now the equivalent of a Category 5 hurricane, is expected to make landfall on the border of India and Bangladesh. The storm will weaken as it approaches land, but in India, it is already forcing evacuations in the thousands just as the country has begun easing its coronavirus lockdown, the world’s largest. In Bangladesh, Earther reports, “the super cyclone is expected to cause heavy precipitation and flooding in the Cox’s Bazar refugee camps, which house more than a million refugees from the Rohingya crisis and are already flood-prone.”

It has become commonplace to say that the coronavirus pandemic is the latest preview of the climate-change future. We have been shown repeatedly, and yet do not learn, that we live within nature, subject to its laws and limits and brutality, and that many of the fortresslike features of modern life that we once assumed were unshakable and unmovable turn out to be very fragile and vulnerable indeed. But it is not just metaphorically true that the pandemic is showing us a preview of the climate-change future, it is also literally true, because the global economic slowdown has meant a reduction of air pollution, which, in general, cools the planet by reflecting sunlight back into space — perhaps, in total, by as much as a half-degree or even full degree Celsius. Less air pollution means, as a result, warmer temperatures. And though the decline in pollution produced by the coronavirus is not total (meaning we won’t be leaping forward a full degree of warming this year), the reduction may well be enough to make 2020 the warmest year on record and produce a summer defined by extreme heat. In other words, we will be living through climate conditions we wouldn’t have otherwise encountered for at least a few more years — living through something like the summer of 2025 in 2020.

We will be facing other extreme events too. Here in the United States, hurricane season is about to begin — an unusually intense one is expected, perhaps even record-breaking, with scientists predicting that there is a 70 percent chance that a major hurricane strikes the continental U.S., which will almost certainly be handling evacuations and precautions in the midst of continued social distancing. (The hurricane season has gotten going early this year, with a named tropical storm appearing before the official onset of hurricane season for the sixth year in a row). And then there’s wildfire season.

In my book, The Uninhabitable Earth, I called the threat of simultaneous or successive disasters like these “climate cascades” — each making it harder to respond to the next. In California, Governor Gavin Newsom has worried that the states’ coronavirus prison furloughs, intended to reduce the risk of coronavirus spreading within prisons, may undermine its ability to fight wildfires this season, since a large share of the states’ firefighters are actually prisoners facing down flames for as little as $1 a day. Usually, they are outfitted for protection with N95 respirator masks. This season, those will almost certainly be in short supply as well. We tend to think of climate impacts as discrete threats: a wildfire, a hurricane, a drought. By the year 2100, it’s possible that parts of the planet will be hit by six climate-driven natural disasters at once. Wildfires tearing through communities cowering terrified by a rolling pandemic only counts as two.

This is what it means to be living already outside the “human niche.” The term comes from a landmark paper published late last month in the Proceedings of the National Academy of the Sciences, “Future of the Human Climate Niche.” What do the authors mean by it? In short, that the range of temperatures that make human flourishing possible is quite narrow, and that climate change promises to close that window — not entirely, but enough to meaningfully diminish how much of the planet can support prosperous, comfortable life.