Two weeks of high-profile talks yielded a package that pushes countries to strengthen near-term climate targets and move away from fossil fuels faster. It insists that wealthy countries fulfill a broken promise to help vulnerable nations cope with the rising costs of climate change. And it cracks open the door to future payments developed nations might make for damage already done.

Saturday’s agreement, however, does not achieve the most ambitious goal of the 2015 Paris accord — to limit Earth’s warming to 1.5 degrees Celsius (2.7 Fahrenheit) above preindustrial levels. Instead, delegations left Glasgow with the Earth still on track to blow past that threshold, pushing toward a future of escalating weather crises and irreversible damage to the natural world.

Highlights: Should we slow the speed of modern tech development to protect the environment?

For more: https://news.cgtn.com/news/2021-11-14… Over the years, severe changes in weather and temperature patterns have disrupted the balance in nature. It has resulted in severe and frequent conditions that pose an environmental threat to the Earth and humanity. After a year of delay, the long-awaited 26th United Nations Conference of Parties on Climate Change (COP26) was recently held in Glasgow, the UK. Join The Chat Room, where our host Li Jingjing and our guests Hu Jiaojiao, Ye Ruiqi and Dahlia A. Ducreay discuss some of the most crucial topics relating to climate change and brainstorm some practical solutions.

One of the big questions concerning climate change is if the weather will make it harder to produce food in a world where the population is growing. Professor Paul Romer, winner of the 2018 Nobel Prize in Economics, believes human ingenuity will solve this problem.

The UN climate summit in Glasgow has adopted a new pact aimed at curbing global warming, but many countries say the final text had been watered down 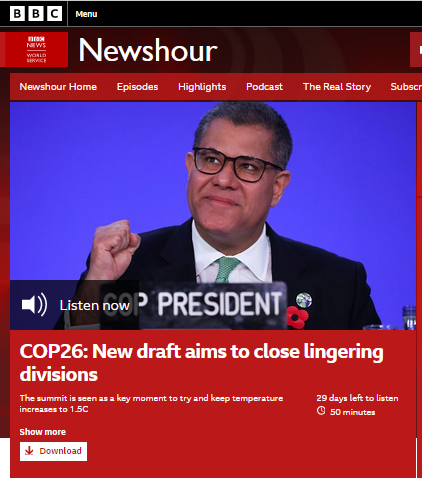 The summit is seen as a key moment to try and keep temperature increases to 1.5C

Negotiations are continuing on the final scheduled day of the COP 26 summit in Glasgow, in the hope of reaching an agreement that will prevent the worst impacts of climate change.

Where are the women in history? (Big Questions 5/8) | VPRO Documentary

Where are the women in history? Writer and researcher Nadine Akkerman investigates the role of women in history. The discoveries she makes paint a very different picture than we know.

Akkerman shows original letters from the 17th century in the National Archives, which she consults for her research. And she visits historian Nathalie Zemon Davis, a great source of inspiration for Akkerman, and Jana Dambrogio.

She researches folding techniques of letters and thus discovered that many female spies worked in the 17th century. Former head of the British intelligence service MI5, lady Stella Rimington, was the model for the character M in the James Bond films. She knows better than anyone what it is like to be a female spy.

Part of ‘Big Questions’, a series in which science journalist Rob van Hattum takes a journey through science with eight Dutch researchers who are at the top of their field. Their ‘big questions’ are central. They tell about their heroes, visit special places and talk about the breakthroughs in their field.

This month will mark a critical juncture in the struggle to avoid climate catastrophe. At the COP26 global climate summit in Glasgow, Scotland, negotiators will be faced with the urgent need to get the world economy off the business-as-usual track that will take the Earth up to and beyond 3 degrees Celsius of excess heating before this century’s end, according to the Intergovernmental Panel on Climate Change (IPCC). Yet so far, the pledges of rich nations to cut greenhouse gas emissions have been far too weak to rein in the temperature rise. Meanwhile, the Biden administration’s climate plans hang in the balance. If Congress fails to pass the reconciliation bill, the next opportunity for the United States to take effective climate action may not arise until it’s too late.

For the past several decades, Noam Chomsky has been one of the most forceful and persuasive voices confronting injustice, inequity, and the threat posed by human-caused climate chaos to civilization and the Earth. I was eager to know professor Chomsky’s views on the roots of our current dire predicament and on humanity’s prospects for emerging from this crisis into a livable future. He graciously agreed to speak with me via video chat. The text here is an abridged version of a conversation we had on Oct. 1, 2021.

Professor Chomsky, now 92, is the author of numerous bestselling political works, translated into scores of languages. His critiques of power and advocacy on behalf of the political agency of the common person have inspired generations of activists and organizers. He has been institute professor emeritus at the Massachusetts Institute of Technology since 1976. His most recent books are Consequences of Capitalism: Manufacturing Discontent and Resistance, with Marv Waterstone, and Climate Crisis and the Global Green New Deal: The Political Economy of Saving the Planet, with Robert Pollin and C.J. Polychroniou.

Stan Cox: Most of the nations that will be meeting in Glasgow for the 26th UN Climate Change Conference on October 31–November 12, 2021, have made emissions-reduction pledges. For the most part, those pledges are wholly inadequate. What principles do you think should guide the effort to prevent climate catastrophe?

Noam Chomsky: The initiators of the Paris Agreement intended to have a binding treaty, not voluntary agreements, but there was an impediment. It’s called the Republican Party. It was clear that the Republican Party would never accept any binding commitments. The Republican organization, which has lost any pretense of being a normal political party, is almost solely dedicated to the welfare of the superrich and the corporate sector and cares absolutely nothing about the population or the future of the world. The Republican organization would never have accepted a treaty. In response, the organizers reduced their goal to a voluntary agreement, which has all the difficulties that you mentioned.

We’ve lost six years, four under the Trump administration, which was openly dedicated to maximizing the use of fossil fuels and dismantling the regulatory apparatus that, to some extent, had limited their lethal effects. To some extent, these regulations protected sectors of the population from pollution, mostly the poor and people of color. But they’re the ones who, of course, face the main burden of pollution. It’s the poor people of the world who live in what Trump called “shithole countries” that suffer the most; they have contributed the least to the disaster, and they suffer the worst.

It doesn’t have to be this way. As you write in your new book, The Path to a Livable Future, there is indeed a path to a livable future. There are ways to have responsible, sane, and racially just policies. It’s up to all of us to demand them, something young people around the world are already doing.

If you look over at the more sane Democrats, who are far from guiltless, there are people called moderates like Sen. Joe Manchin, a democrat from West Virginia and the leading recipient of fossil fuel funding, whose position is that of the fossil fuel companies, which is, as he put it, no elimination, just innovation. That’s ExxonMobil’s view, too: “Don’t worry, we’ll take care of you,” they say. “We’re a soulful corporation. We’re investing in some futuristic ways to remove from the atmosphere the pollution that we’re pouring into it. Everything’s fine, just trust us.” No elimination, just innovation, which may or may not come, and if it does, it will probably be too late and too limited.

Take the IPCC report that just appeared. It was much more dire than previous ones and said we must eliminate fossil fuels step by step, every year, and be free of them completely within a few decades. A few days after the report was released, Joe Biden issued a plea to the Organization of the Petroleum Exporting Countries (OPEC) oil cartel to increase production, which would lower gas prices in the United States and improve his position with the population. There was immediate euphoria in the petroleum journals. There’s lots of profit to be made, but at what expense? It was nice to have the human species for a couple of hundred thousand years, but evidently that’s long enough. After all, the average life span of a species on Earth is apparently around 100,000 years. So why should we break the record? Why organize for a just future for all when we can trash the planet, helping rich corporations get richer?