Live: Fly over Shanghai and enjoy the panoramic view of beautiful landmarks

CGTN
With the opening of the fourth China International Import Expo (CIIE) just around the corner, CGTN reporters Dong Xue and Wu Lei report to us from a helicopter flying above Shanghai City to get a panoramic view of Shanghai’s landmarks from the sky 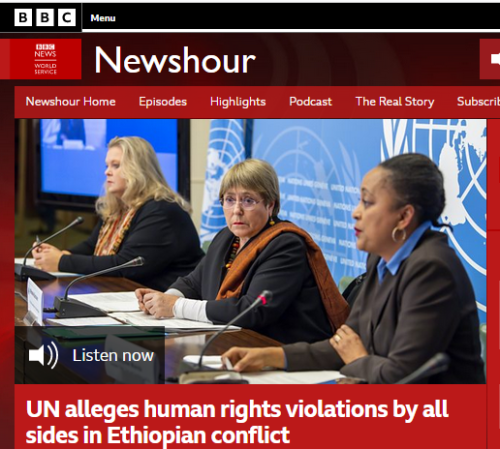 Also in the programme: As the COP26 climate conference continues in Glasgow, we look at the prospects for international cooperation on climate change with American economist Jeffrey Sachs.

The Gilder Lehrman Center for the Study of Slavery, Resistance, and Abolition

WELCOME: Peter Salovey (President, Yale University) KEYNOTE CONVERSATION: Universities, Slavery, and Memory David W. Blight* (Chair of the Yale and Slavery Working Group; Sterling Professor of History; and Director of the Gilder Lehrman Center for the Study of Slavery, Resistance, and Abolition at the MacMillan Center at Yale) in conversation with Elizabeth Alexander (President of the Andrew W. Mellon Foundation) and Jonathan Holloway (President of Rutgers, the State University of New Jersey)

The Nation’s John Nichols: Democrats Must Deliver on Promises or Voters Will Punish the Party

Democracy Now!Nov 3, 2021
We speak with The Nation’s John Nichols about key outcomes from Tuesday’s election night. In a major blow for Democrats, Republican Glenn Youngkin, who President Biden warned is an extremist in the vein of former President Trump, won the Virginia governor’s race against former Governor Terry McAuliffe. Youngkin campaigned for so-called parents’ rights — a catch-all phrase adopted by right-wing opponents of vaccine and mask mandates, transgender rights and critical race theory. Tuesday’s elections also saw closely watched races in New Jersey, New York City, Buffalo and Boston, where Michelle Wu made history by becoming the first woman and first person of color elected as mayor. Nichols says disappointing results for Democrats are tied to the party’s infighting in Washington and the inability to pass major legislation despite holding the White House and Congress: “You can’t fail to deliver on your promises and then expect to win elections. And that’s a big message for Democrats.”

Kumi Naidoo at COP26: Will Rich Countries Deliver Pledged Billions for South Africa to Get Off Coal?

Democracy Now!Nov 3, 2021
On day three of the U.N. climate summit in Glasgow, Scotland, we look at the fight against Big Coal, starting with leading South African climate activist Kumi Naidoo. South Africa is one of the world’s largest coal producers, and the United States has joined the European Union and other wealthy nations to announce a new deal to provide $8.5 billion to the country to help it decommission its coal plants and invest in renewable energy. “Let’s see if the money actually flows and if those countries actually follow up with that commitment,” says Naidoo, global ambassador for Africans Rising for Justice, Peace and Dignity and the former head of Amnesty International and Greenpeace. He says the deal puts pressure on the South African government to “ensure a just transition and make the right investments in wind, solar and other clean energy technologies.”

350.orgNov 3, 2021
On October 29, thousands of activists took to the streets around the United States to call on the Federal Reserve to use its regulatory powers and stop banks from funding climate disasters. 350 local groups and allies visited to the Federal Reserve’s HQ, regional, and local offices from coast to coast #FossilFreeFed.

Where is the conflict in Ethiopia heading? – BBC News

BBC NewsNov 3, 2021
The US Special Envoy for the Horn of Africa has repeated a call to Ethiopia’s warring parties to end hostilities.

Jeffrey Feltman is expected in the country on Thursday as violence with a rebel alliance flares.

Prosser Gifford served as dean of the faculty from 1967-1979. He holds a law degree from Harvard Law School and a Ph.D. in history from Yale. In addition to teaching appointments at Yale, he also has extensive experience as an editor of volumes on African history and United States foreign policy. In 1980 Gifford was appointed deputy director of the Woodrow Wilson International Center for Scholars where he worked until 1988. He then served at the Library of Congress as the director of the Office of Scholarly Programs and the John W. Kluge Center until his retirement in 2005.

Robert C. Townsend came to Amherst in 1962 as a member of the English Department and served as the Andrew W. Mellon Professor in the Humanities until his retirement in 2008. He has taught everything from Wordsworth and Keats to nonfiction writing.

The Immediate Challenges to our Nation’s Food Supply Chain