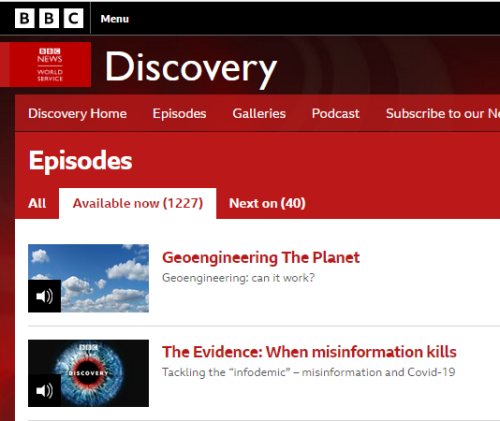 Old Crow chief on his push to tackle climate change

CBC News: The NationalNov 2, 2021
Old Crow Chief Dana Tizya-Tramm talks to Adrienne Arsenault about his passion for fighting climate change and why he thinks if his Yukon village can promise to be carbon neutral by 2030, larger communities can too.

Democracy Now! is an independent global news hour that airs on nearly 1,400 TV and radio stations Monday through Friday. Watch our livestream 8-9AM ET

Democracy Now!Nov 1, 2021
As the U.K. government tries to claim the mantle of climate leadership at the U.N. Climate Change Conference, we speak with Mary Church, head of campaigns at Friends of the Earth Scotland. She describes how activists are calling on U.K. Prime Minister Boris Johnson to block the development of the giant Cambo oil field off the coast of Scotland, which would run counter to the U.N. goals of phasing out fossil fuels. “We know that fossil fuels need to be phased out long, long before 2050, but this proposal is to keep on drilling oil until 2050,” says Church, adding that the extraction of 800 million barrels of oil would be “the equivalent of 10 years of Scotland’s annual emissions.”

Democracy Now!Nov 1, 2021
This year’s U.N. Climate Change Conference in Glasgow may be the whitest and most privileged one ever, with thousands from the Global South unable to attend because of lack of access to COVID-19 vaccines and travel restrictions. The global inequity in vaccine access mirrors the disproportionate impact of the climate crisis that has fallen mostly on poor countries least responsible for emissions, says climate activist Dipti Bhatnagar in Mozambique. “The people who need to be there, who need to hold people accountable, are not going to be there,” says Bhatnagar, climate justice and energy coordinator at Friends of the Earth International, who was unable to attend the climate conference in Scotland because of a lack of access to COVID-19 vaccines. “What is going to come out of this COP is going to be largely illegitimate because of the way that they’ve organized it and because of the intentions behind it.”

Democracy Now!Nov 1, 2021
As U.S. President Joe Biden and other world leaders gather amid massive protests in Glasgow for COP26, the U.N. Climate Change Conference, we look at the growing pressure on countries to limit global temperature rise to 1.5 degrees Celsius and avert the most damaging effects of the climate crisis. Leaders of the G20, representing the 20 wealthiest nations, gathered ahead of COP26 and pledged to do more to curb emissions but offered few specifics on reaching that goal, despite representing the countries responsible for about 80% of greenhouse gases released into the atmosphere. “What we’re seeing here is lots of tough talk on climate, but lack of plans, lack of policies and refusal to put money on the table,” says Asad Rehman, executive director of War on Want and lead spokesperson for the COP26 Coalition. Rehman also gives an overview of the demands from protesters, and plans for the next two weeks.

Democracy Now!Nov 2, 2021
We look at Monday’s Supreme Court oral arguments on the constitutionality of Texas’s near-total ban on abortions with legendary lawyer Kathryn “Kitty” Kolbert, who argued the 1992 landmark Supreme Court case credited with saving Roe v. Wade. “’Save Roe’ has been our mantra for so many years, and it no longer works because of the ultraconservatie nature of this Supreme Court,” Kolbert says. Instead, people must protect abortion rights by “electing people who will preserve women’s rights, and begin to think of that as our most important task.”

Samoan Climate Activist Brianna Fruean: If Pacific Islands Drown, the Rest of the World Is Doomed

Democracy Now!Nov 2, 2021
We speak with Brianna Fruean, an activist from Samoa, who implored global leaders at the U.N. climate summit to consider how small islands like Samoa, Tutuila and Tonga might drown without urgent action against rising sea levels. She told the audience, “If you’re looking for inspiration on climate leadership, take a look at young Pacific people.” Many Pacific islands are in danger of vanishing in the next decade if sea levels and global temperatures continue to rise. “If we are able to save the islands, we are able to save the world,” Fruean tells Democracy Now!