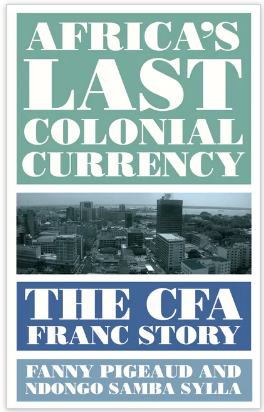 Colonialism persists in many African countries due to the continuation of imperial monetary policy. This is the little-known account of the CFA Franc and economic imperialism.

The CFA Franc was created in 1945, binding fourteen African states and split into two monetary zones. Why did French colonial authorities create it and how does it work? Why was independence not extended to monetary sovereignty for former French colonies? Through an exploration of the genesis of the currency and an examination of how the economic system works, the authors seek to answer these questions and more.

As protests against the colonial currency grow, the need for myth-busting on the CFA Franc is vital and this exposé of colonial infrastructure proves that decolonisation is unfinished business.

Fanny Pigeaud is a journalist and the author of a number of books, including A Decade of Cameroon (Brill, 2019).

Ndongo Samba Sylla is a Research and Programme Manager for the Rosa Luxemburg Foundation. He is the author of The Fair Trade Scandal (Pluto, 2014).

William Mitchell is Professor of Economics at the University of Newcastle, Australia. He is considered one of the world’s leading heterodox economists and is the author of Reclaiming the State (Pluto, 2017).