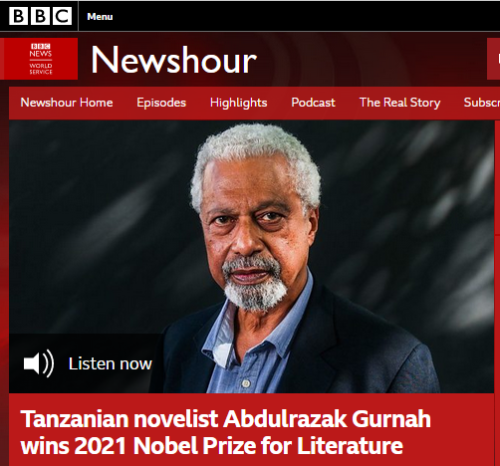 The Tanzanian writer, Abdulrazak Gurnah, has won this year’s Nobel Prize for literature. He is best known for his novels ‘Paradise’ and ‘By the Sea’. We spoke to him minutes after he had heard the news from the Swedish Academy. He is the first black African writer to win the prize since 1986; we will look at the significance of this accolade.

Arizona Secretary of State On The Dangers Of Trump Supporting Leaders

Katie Hobbs, Arizona Secretary of State and gubernatorial candidate, and Jocelyn Benson, Michigan Secretary of State, react to the recent Arizona audit hearing and argue that politicization of elections is “dangerous for our democracy”.

David J. Rothkopf (born 24 December 1955) is a professor of international relations, political scientist and journalist. Listen to a Rothkopf book for free: https://www.amazon.com/gp/search?ie=U… Audiobooks by David Rothkopf: Traitor: A History of American Betrayal from Benedict Arnold to Donald Trump https://amzn.to/3nECXNL

The Great Questions of Tomorrow: The Ideas That Will Remake the World https://amzn.to/3EuKogz Power, Inc.: The Epic Rivalry between Big Business and Government—and the Reckoning That Lies Ahead https://amzn.to/2Xzs5pK https://en.wikipedia.org/wiki/David_R… Superclass:

The Global Power Elite and the World They Are Making is a book about global governance by American author David Rothkopf, released in March 2008 by publisher Farrar, Straus and Giroux. The book claims that the world population of 6 billion people is subject to the immense influence of an elite (i.e. The Superclass) of six thousand individuals.

Listen to the audiobook: https://amzn.to/3oMkPCg

Until the late 20th century, governments of the great powers provided most of the superclass, accompanied by a few heads of international movements (i.e., the Pope of the Roman Catholic Church) and entrepreneurs (Rothschilds, Rockefellers). According to Rothkopf, in the early 21st century, economic clout—fueled by the explosive expansion of international trade, travel and communication—rules. Further, the nation-state’s power has diminished shrinking politicians to minority power broker status. Leaders in international business, finance and the defense industry not only dominate the superclass, they move freely into high positions in their nations’ governments and back to private life largely beyond the notice of elected legislatures (including the U.S. Congress), which remain abysmally ignorant of affairs beyond their borders.

He proposes that the superclass’ disproportionate influence over national policy is constructive but always self-interested, and that across the world, few object to corruption and oppressive governments provided they can do business in these countries. https://en.wikipedia.org/wiki/Supercl…)

In response to the acceleration of worldwide interdependence, both between human societies and between humankind and the biosphere, the term “global governance” may name the process of designating laws, rules or regulations intended for a global scale. https://en.wikipedia.org/wiki/Global_…