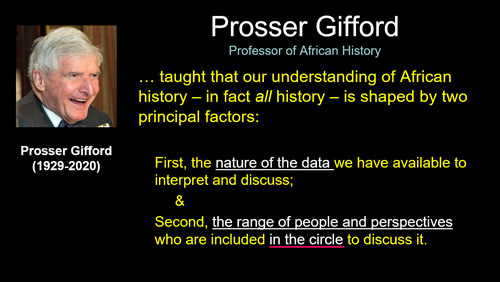 New digital techniques for scanning and replicating old maps of Africa can be deployed with QR Codes and Zoom conferencing for a new kind of education experience on a global basis.

Students of all ages and on all levels from elementary school through college and graduate students as well as post-doctoral scholars can now study and analyze rare and delicate maps as primary documents in constructing new narratives of history based on historical cartography.

Prosser Gifford (Rhodes Scholar, Yale’s first African Historian, the first Dean of Faculty at Amherst and Director of numerous scholarly programs at the Smithsonian’s Woodrow Wilson Institute and subsequently at the Library of Congress) pioneered some of the thinking behind these new achievements and served as the inspiration for the development of the current-day group of scholars and researchers known as “The Africa Map Circle.” 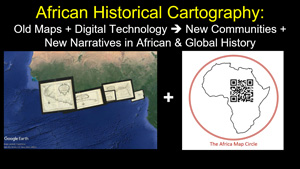 Scholars and students the world over can now deploy technologies and techniques to create self-directed “Ken-Burns-like” documentaries based on unique, scarce, fragile and historically valuable documentation in much the same manner that Ken Burns himself created his magisterial documentary commentaries on topics like the American Civil War.

High school instructors and college professors do not need to “teach” students how to use an iPhone in our day.  Most teenagers and now have mastered that “skill set” long before their formal “teachers” and professors,   In fact, it is most often the case that the students need to instruct their teachers on how to use these new phones — complete with the QR codes that can be scanned now with many widely-available photo-aps built-in to contemporary phones.

What needs to be undertaken now is the educational task of mobilizing the student’s skills and inviting them to become the architects of their own education.  Students who already possess the requisite skills need to be challenged to create meaningful and moving documentaries on their own from new sets of digitized historical material.

Based on the insight and inspiration of the late Prosser Gifford this is what “The Africa Map Circle” intends to enable among students and scholars around the world.

As Prosser Gifford emphasized, who is in the “circle” to be enabled to ask the questions is critical for an understanding of any history.

Who built the seven gates of Thebes?
The books are filled with names of kings.
Was it the kings who hauled the craggy blocks of stone?
And Babylon, so many times destroyed.
Who built the city up each time? In which of Lima’s houses,
That city glittering with gold, lived those who built it?
In the evening when the Chinese wall was finished
Where did the masons go? Imperial Rome
Is full of arcs of triumph. Who reared them up? Over whom
Did the Caesars triumph? Byzantium lives in song.
Were all her dwellings palaces? And even in Atlantis of the legend
The night the seas rushed in,
The drowning men still bellowed for their slaves.

Young Alexander conquered India.
He alone?
Caesar beat the Gauls.
Was there not even a cook in his army?
Phillip of Spain wept as his fleet
was sunk and destroyed. Were there no other tears?
Frederick the Great triumphed in the Seven Years War.
Who triumphed with him?

Each page a victory
At whose expense the victory ball?
Every ten years a great man,
Who paid the piper?

So many particulars.
So many questions.