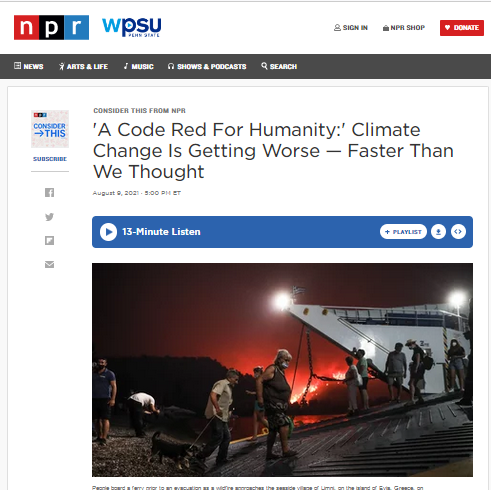 People board a ferry prior to an evacuation as a wildfire approaches the seaside village of Limni, on the island of Evia, Greece, on August 6, 2021.

A landmark new report from the United Nations warns that the world is running out of time to avoid the catastrophic effects of global warming.

Those effects are already becoming clear as extreme weather, drought, and fire become more common. One of the latest examples: wildfires are raging amid a record heat wave in Turkey, Lebanon, Italy and Greece. Durrie Bouscaren reports for NPR from Istanbul.

Other reporting heard in this episode came from NPR’s Rebecca Hersher, who’s been covering the new U.N. report on climate change.

In participating regions, you’ll also hear a local news segment that will help you make sense of what’s going on in your community.

This episode was produced by Brent Baughman. It was edited by Andrea Kissack, Lee Hale and Fatma Tanis. Additional editing from Jim Kane and Jason DeRose. Our executive producer is Cara Tallo.