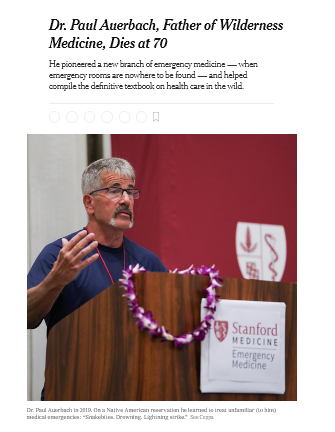 Dr. Paul Auerbach in 2019. On a Native American reservation he learned to treat unfamiliar (to him) medical emergencies: “Snakebites. Drowning. Lightning strike.”Credit…Sue Coppa
He pioneered a new branch of emergency medicine — when emergency rooms are nowhere to be found — and helped compile the definitive textbook on health care in the wild.

Dr. Paul Auerbach, an emergency care physician who pioneered the field of wilderness medicine in the 1980s and then taught ways to heal people injured by the unpredictable, died on June 23 at his home in Los Altos, Calif. He was 70.

His wife, Sherry Auerbach, said the cause was brain cancer.

Out in the wild, knowing how to treat a venomous snake bite or a gangrenous infection can mean the difference between life and death. In the 1970s, however, the specialized field of health care known as wilderness medicine was still in its infancy. Then Dr. Auerbach showed up.

A medical student at Duke University at the time, he went to work in 1975 with the Indian Health Service on a Native American reservation in Montana, and the experience was revelatory.

“We saw all kinds of cases that I would have never seen at Duke or frankly anywhere else except on the reservation,” Dr. Auerbach said in a recent interview given to Stanford University, where he worked for many years. “Snakebites. Drowning. Lightning strike.”

“And I just thoroughly enjoyed it,” he continued. “Taking care of people with very limited resources.”

Back at Duke he tried to learn more about outdoor medicine, but he struggled to find resource material.

Dr. Auerbach started researching material for the book in 1978, when he began his medical residency at U.C.L.A., finding the time to do so despite grueling 12-hour hospital shifts. He collected information about how to treat burn wounds, hypothermia, frostbite and lightning injuries. He interviewed hikers, skiers and divers. And he assigned chapters to doctors who were passionate about the outdoors.

The resulting book, “Management of Wilderness and Environmental Emergencies,” which he edited with a colleague, Edward Geehr,was published in 1983 and is widely considered the definitive textbook in the field, with sections like “Protection From Blood-Feeding Arthropods” and “Aerospace Medicine: The Vertical Frontier.” Updated by Dr. Auerbach over 30 years, it is in its seventh edition and now titled “Auerbach’s Wilderness Medicine.”