The COVID-19 pandemic has fueled a sharp increase in the number of people going hungry worldwide, along with conflict and the impacts of climate change. A new report on the state of food security and nutrition in the world found about one-tenth of the global population were undernourished last year, more than 2.5 billion people did not have access to sufficiently nutritious food, and one in five children now face stunted growth. Saskia de Pee, the World Food Programme’s head of systems analysis for nutrition, describes how the impact is “going to be long-term.”

A swiftly spreading wildfire raged through drought-parched timber and brush in south-central Oregon for a ninth day on Wednesday, displacing hundreds of residents. The Bootleg fire – which has burned through more than 212,377 acres (85,945 hectares) of forest – has burned 21 homes and 54 other structures, according to state and federal authorities. Video obtained from the Oregon state fire marshal showed emergency crews up close to the fire as it burned around the Fremont-Winema National Forest, about 250 miles south of Portland.

We go to South Africa, where more than 70 are dead and at least 3,000 people have been arrested since demonstrations erupted after former President Jacob Zuma began his 15-month jail sentence for refusing to testify in a corruption probe. Protesters also expressed frustration with entrenched poverty and inequity as South Africa battles a devastating wave of COVID-19. “This was really a perfect storm that has built up,” says Sithembile Mbete, a senior lecturer in political sciences at the University of Pretoria in Johannesburg. “The protests and the unrest has stopped being about former President Zuma and has become more about the socioeconomic conditions that people find themselves in and the problems of hunger.”

As the United States continues to withdraw its forces from Afghanistan after 20 years of war and occupation, the Taliban say they now control most Afghan territory, surrounding major population centers and holding more than two-thirds of Afghanistan’s border with Tajikistan. Former President George W. Bush made a rare criticism of U.S. policy, saying, “I’m afraid Afghan women and girls are going to suffer unspeakable harm.” But a leading Afghan women’s rights activist says the plight of women in the country has always served as a “very good excuse” for U.S. military goals, while conditions in the country have barely improved. “Unfortunately, they pushed us from the frying pan into the fire as they replaced the barbaric regime of the Taliban with the misogynist warlords,” says Malalai Joya, who in 2005 became the youngest person ever elected to the Afghan Parliament. She says the decades of U.S. occupation have accomplished little for the people of Afghanistan. “No nation can donate liberation to another nation,” she says. 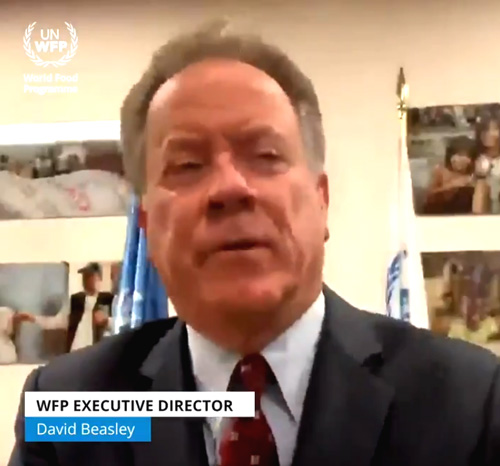 World Food Programme (WFP) Executive Director David Beasley has warned that in addition to the threat posed by COVID-19, the world faces “multiple famines of biblical proportions” that could result in 300,000 deaths per day — a “hunger pandemic”.

Speaking at an online briefing broadcast by the UN on YouTube, Facebook and Twitter, Beasley highlighted the fact that there are currently 821 million food-insecure people in the world. “If we don’t prepare and act now, to secure access, avoid funding shortfalls and disruptions to trade,” he said, the result could be a “humanitarian catastrophe … in a short few months”.

Beasley added: “Millions of civilians living in conflict-scarred nations, including many women and children, face being pushed to the brink of starvation, with the spectre of famine a very real and dangerous possibility.” 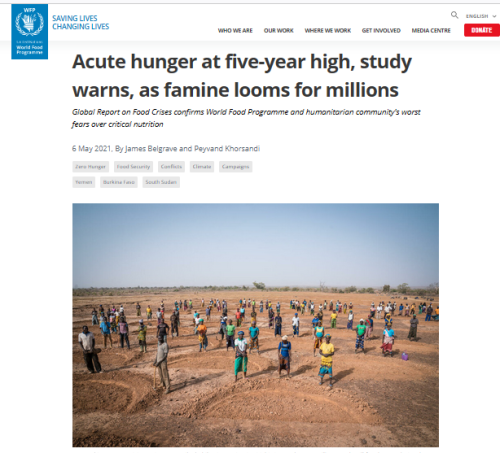 At least 155 million people in 55 countries faced acute hunger in 2020 — 20 million more than 2019, according to figures from the 2021 Global Report on Food Crises, released today.

This marks a five-year high for people facing life-threatening acute food security, accompanied by a breakdown in livelihoods. It comes after aid organizations issued a joint warning about the very real prospect of famine this year.

Published by the Global Network Against Food Crises — an alliance of government agencies and NGOs, including the World Food Programme (WFP), the report highlights the lethal combined impact of conflict, extreme weather and economic shocks, exacerbated, last year, by the COVID-19 pandemic.

Arif Husain, chief economist at WFP said: “Our worst fears are coming true. Needs are nowhere near subsiding — acute hunger is up, chronic hunger is up and extreme poverty is up. Million remains on the verge of famine due to conflict. There is no end in sight unless we resolve conflict. Till then, without immediate action, millions will starve — the window to avert famine is closing fast.”

In a joint statement, the EU, USAID, the UN’s Food and Agriculture Organization and WFP, said: “The outlook for 2021 and beyond is grim.” 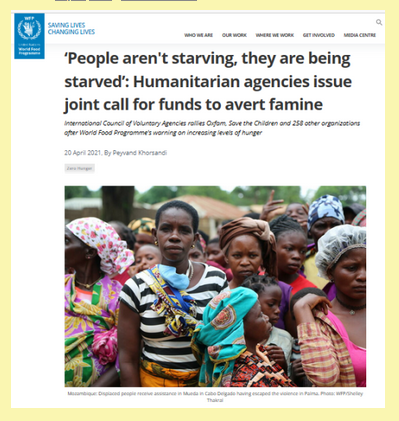 International Council of Voluntary Agencies rallies Oxfam, Save the Children and 258 other organizations after World Food Programme’s warning on increasing levels of hunger
20 April 2021, By Peyvand Khorsandi

Humanitarian agencies around the world have joined forces to warn that rising hunger levels are going to lead to famines unless urgent action is taken.

The letter, published in The Guardian today, has warned “people are not starving, they are being starved” in countries such as Afghanistan, Burkina Faso, Haiti and Zimbabwe.

“Girls and boys, men and women” are being “starved by conflict and violence … by inequality, by the impacts of climate change, by the loss of land, jobs or prospects, by a fight against COVID-19 that has left them even further behind.”

It comes as the WFP marks a year since urged the UN Security Council to act fast over “famines of biblical proportions”.

2018 – The State of Food Security and Nutrition in the World (SOFI): Building climate resilience for food security and nutrition | World Food Programme 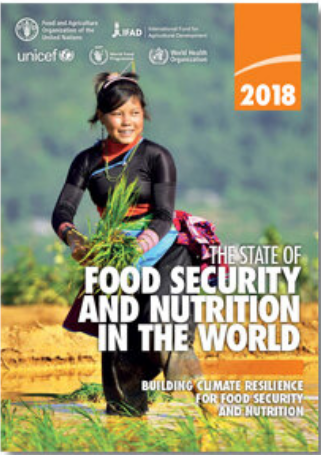 2018 – The State of Food Security and Nutrition in the World (SOFI): Building climate resilience for food security and nutrition

New evidence in SOFI 2018 confirms a rise in world hunger: the number of people who suffer from hunger has been growing over the past three years, returning to levels from almost a decade ago. Multiple forms of malnutrition are evident in many countries: adult obesity is growing even as forms of undernutrition persist.

The report says that climate variability and extremes are key drivers behind this rise, together with conflict and economic downturns, and are threatening to erode and reverse gains made in ending hunger and malnutrition. SOFI 2018 reveals new challenges on the road to Zero Hunger, while setting out urgent actions needed to achieve the goal by 2030.

About the series: The State of Food Security and Nutrition in the World is an annual flagship report jointly prepared by FAO, IFAD, UNICEF, WFP and WHO to inform on progress towards ending hunger, achieving food security and improving nutrition and to provide in-depth analysis on key challenges for achieving this goal in the context of the 2030 Agenda for Sustainable Development. The report targets a wide audience, including policy-makers, international organizations, academic institutions and the general public.

The State of Food Security and Nutrition in the World 2017. Building Resilience for Peace and Food Security |Policy Support and Governance| Food and Agriculture Organization of the United Nations

The international community is committed to ending hunger and all forms of malnutrition worldwide by 2030. While much progress has been made, conflict and human-induced and natural disasters are causing setbacks. This year’s The State of Food Security and Nutrition in the World warns that the long-term declining trend in undernourishment seems to have come to a halt and may have reversed, largely on account of the above-mentioned factors. Meanwhile, though progress continues to be made in reducing child malnutrition, rising overweight and obesity are a concern in most parts of the world.

These and other findings are detailed in the 2017 edition of The State of Food Security and Nutrition in the World (formerly, The State of Food Insecurity in the World). For the first time, this year’s report is published by an expanded partnership, with UNICEF and WHO now joining FAO, IFAD and WFP. The report also marks a new era in the monitoring of food security and nutrition in the context of the 2030 Agenda for Sustainable Development and the UN Decade of Action on Nutrition. To assess progress made towards the goal of ending hunger, the report uses both the traditional measure of the prevalence of undernourishment and a new indicator, the prevalence of severe food insecurity, based on the Food Insecurity Experience Scale. The report further looks at various forms of malnutrition, including trends and situations for child stunting, wasting and overweight and for adult obesity, breastfeeding and anaemia in women. The thematic part of the report sheds light on how the increasing incidence of conflict in the world is affecting food security and nutrition. It also explores how, by improving food security and nutrition and by making rural livelihoods more resilient, it is possible to help prevent conflicts and sustain peace.