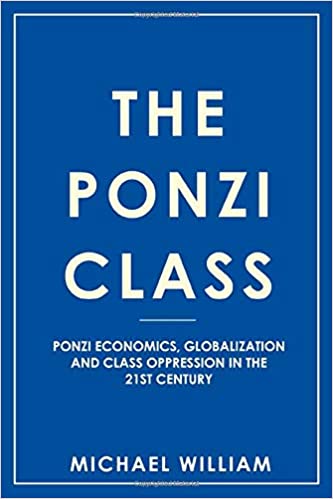 The rise of the Ponzi class is the dominant political phenomenon of the 21st century. There has been the emergence of a new class structure in which the ruling Ponzi class are able to grasp ordinary peoples’ monies and spend it on themselves and their pet projects. Ordinary people are impoverished.The old class structure against which the Left railed ever since the mid-19th century has been superseded by another. The clapped-out theories of classical Marxism and the Communist Manifesto of 1848 no longer apply as the class structure upon which such theories depend no longer exists.

It is not the capitalist bourgeoisie which impoverishes the working class, it is the Ponzi class, mainly, through the tax system and the exercise of state power.Underlying this are the policies of Ponzi economics, a corrupted version of Keynesianism, a defective theory from the 1930s; and globalization, likewise a corrupted version of free trade.This book examines the background economic theories and arguments pre-dating the Keynesian revolution, in particular the battle between free trade and the campaign for Tariff Reform in Britain, before charting the Keynesian downfall into economic crises and failure, with the emergence of monetarism.

This book then puts the current economic plight of Britain into context and sets out the scale of the problems, which apply to other countries too – especially the USA which has to contend with its own economic difficulties and rival powers in Asia. Finally, possible solutions are highlighted. The rise of the Ponzi class is something that affects the West in general. It is only by looking back at the past that the present can be properly understood, and the lessons from the past apply today.